Today is the day before the 4th of July. Three random thoughts on the matter of “family”. 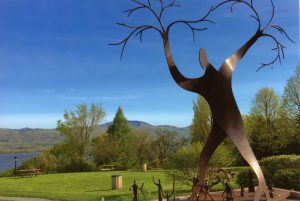 1. A few weeks ago, my brother John took a short trip into the Quebec of our French-Canadian ancestors (Dad was 100% French-Canadian). Within Ste. Famille, part of the beautiful Ile d’Orleans, John noted the evocative roadside sculpture shown above. (In the background is the north channel of the St. Lawrence River; just a ways to the right out of eyeshot is the famous Ste. Anne de Beaupre.)

This sculpture and John’s photo interpretation make one of those pictures “worth a thousand words”. I have my thoughts, you have yours.

2. During this same time period the results came for my DNA analysis through, in my case, 23andMe. I’ve done family history for many years, and just hadn’t gotten around to the ancestry piece.

The results were a little surprising, but only a little.

A look at the map (below), and a most cursory knowledge of immigration patterns over thousands of years fills in most blanks, I suppose, for most of us. 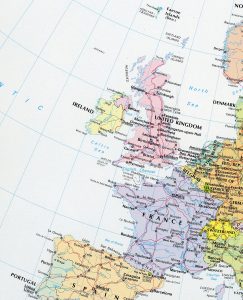 In my case, one of my primary root families, the first Collette (as we spell it) ancestor in our French-Canadian bunch came from Brittany more or less between Brest and St. Malo, which area is directly south of westernmost England, and the rest of the French roots were mostly along the western side of what is now France. The British Irish is hardly a surprise.

(A friend whose German ancestors came from the Ukraine, and was by definition a “German from Russia”, took the same DNA test, and told me that her analysis was that she was “mostly French”. It surprised her; it didn’t surprise me. She didn’t look German, and her family name didn’t sound German, but by geographic location (Alsace-Lorraine) her French ancestors had likely been part of the Germanic portion of Europe.)

I am very happy I invested in 23andMe. At the minimum, it is a gift to later generations who might wonder who they are. I recommend the process.

3. In the meantime, I continue in the process of really looking carefully at “stuff” from the German ancestors in ND. There continue to be interesting surprises, including this postcard which surfaced recently. (Shown are both sides of the card.) 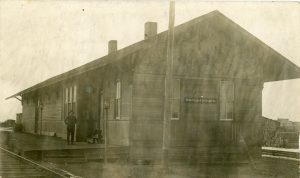 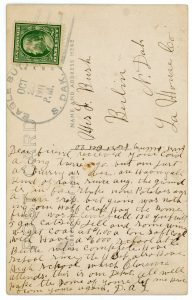 This “postal” has its own rich story, which must rely on individual interpretation of snippets of facts within. I only know a few of the facts, but here are some pieces I can share:

A. The card was to my grandmother Rosa Busch who, at the time the card was delivered was about 27 years old, had lived on the farm for six years, and had two children, ages 4 and 2. Berlin, her town, had come into being in 1904. She and her spouse came from extreme southwest Wisconsin, near Dubuque IA. It was a time when land was available and a boom of sorts was on, relying on railroad transportation.

B. Eagle Butte, according to Wikipedia, was incorporated in 1911, the same year of the postmark on the card.

C. It is unlikely that the correspondent had ever lived in or near Berlin ND. The towns were far apart in a day before easy access between places.

My guess, and that’s all it is: the two women probably knew each other when they were growing up in southwest Wisconsin. Eagle Butte is a place name I’d never heard of until I saw this card.

* – POSTNOTE: The analysis noted that I had more Neanderthal components than 89% of the sample. This, of course, gave an opening to my four younger siblings – payback time for things remembered from our youth! But, Neanderthals were survivors, and it can’t be all bad. Maybe when they were handing out the chromosomes I got most of the good stuff! Anyway, so goes the argument.

We are all part of the human family, and all residents of the same planet which has no boundaries. It would be nice if we remembered that, always.

Have a great 4th.

Dick Bernard: Far too many days, and they’ve only just begun…. “Respect the Board, Please”
Scroll to top