For several years I’ve spent a winter weekend at a Retreat for Men at the Franciscan Retreat and Spirituality Center in Prior Lake MN. I enthusiastically recommend both the Retreat and the Retreat Center. (Next years Men’s Retreat is the first weekend of February, 2018).
This years theme: “Find the Missing Peace: Pathways to Prayer”. This became the focus at the first group event on Friday night:
(click on photos to enlarge them) 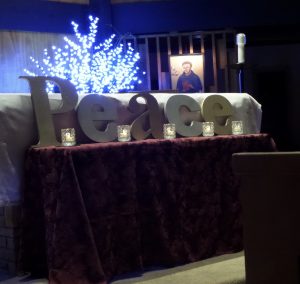 Each of us was given a wooden token as a reminder: 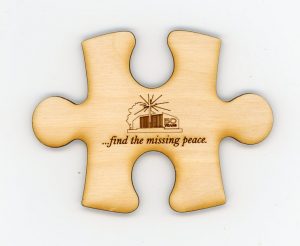 What do a bunch of men, mostly older, do in 44 hours at a Retreat on Prayer?
Well, I can only speak for myself. It was a quieting, reflective time. I didn’t see a newspaper, or hear any news, or see any television, or hear about such for 44 hours. It had been a long week, so I got some needed extra sleep; there were few distractions from just thinking about where I fit into the bigger picture of “peace”, and life in general.
It was a precious time.
Doubtless, we men approached it the topic in our own ways, privately, coming from wherever we were at at the moment. The greatest gift was the opportunity to escape from the madding crowd which is a constant in all of our surroundings in this fast and furiously paced world in which we live. For some precious moments we could be quiet.
In part of my time, I walked outdoors – the weather was decent.
I’ve made friends with an old Peace Pole out there. The pole needs to be rehabbed, and when I reported on that, yes, they knew. Much to my surprise, a good friend of mine, Fr. Vince Peterson, had been the driving force for the peace pole some years ago. I’m sure it will be brought up to date.
Personally, I wouldn’t want it replaced with a new pole. By itself, it represents a history I want to help reinvent. Peace Poles are around you. Look for them. They’re available. Here’s one source, a good friend of mine. 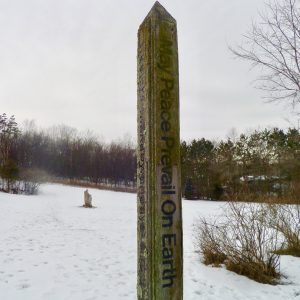 Of course, we got pieces of paper at the retreat, and they were talked about by the conference facitators. Thomas Merton was a favorite source of quotes. I think I was in college when I first read his “Seven Storey Mountain”…inspiring book.
And we saw a movie on Saturday night, one I’d highly recommend – very thought provoking. It’s called “Unconditional“, and is 90 minutes, here on Youtube. Take the time, and watch it! It may speak to you, in some way….
Franciscan Retreat Center celebrated its 50th birthday last year, and there were panel displays remembering events surrounding its history, which began in 1966. I found these interesting in themselves, and they don’t need additional elaboration.
late 1960s 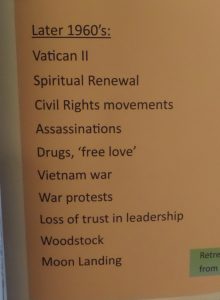 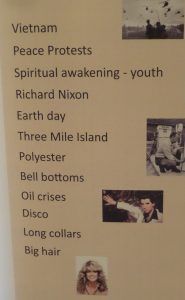 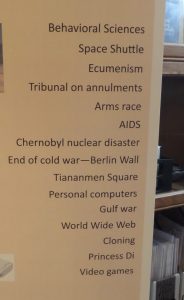 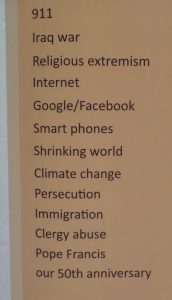