Related Posts accessible here.
Sunday till Thursday, the end of January, the beginning of February, 2017, we were visiting a friend who has lived for over 50 years in a northern Minnesota town of under 2,000. We have been there before – we are friends for many years. It is always a pleasant visit.
Of course, we’re in the beginning of different political times, and this was a few days to notice things. For starters, I noticed a small photo of our friends “Gentleman Soldier” (below) who she had met in the aftermath of WWII in Germany, and later married, and lived and raised their family in rural America, for over 50 years, till he died in 1998.
I asked to borrow the 2×2 1/2″ photo, and scanned it. It is below (click to enlarge). 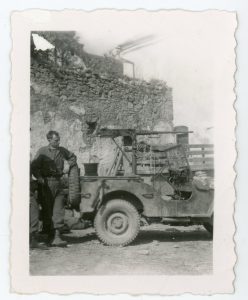 It got me to thinking about those authoritarian days our friend and all Germans became accustomed to the 1930s, the days which ultimately left their country in ruins, and themselves, starving.
Back in the beginning, in the 1920s and 1930s, communication was primitive compared to today, not much difference between Germany and the U.S. There were newspapers, of course, and other printed material; there were telephones, but seldom used, and telegraph was more likely and reliable for emergency use. Radio was in its infancy (the first American radio news broadcast was about 1920).
Today, of course, all is different. Makes hardly any difference where you live, you have hundreds of choices of media.
We watched cable and regular news on the channels she preferred. We read the newspaper and the magazines she received, etc. It was just like at home. We could watch the beginning of the new administration in Washington just like anybody else. The new President couldn’t contain himself, with yet another reference to “fake” news (it seems to mean, that which does not flatter him).
Our friends rural community is like (apparently) most during this election time: basically conservative Republican. In the just completed election, the now-President won about 60% of her counties vote.
These would probably include the old guy (maybe my age or younger) who was railing away at the town bowling alley which doubles as the morning coffee hangout. He was raging against those present day immigrants and refugees taking free stuff that belonged to him. His friend didn’t seem to agree with him, but wasn’t about to argue.
The rural town dates back into the late 1800s, and was virtually 100% settled by immigrants from Norway and Sweden but, I guess, he thinks those immigrants were somehow different than today. My guess is the anti-immigrant guy comes from that immigrant stock.
Our friend shared last Sunday’s church bulletin from her church in town. She said the pastor was a veteran, two tours in Iraq, one in Afghanistan. His words are well worth the time to read in their entirety: Pastors message Ja 29 17001 I wonder how the flock received his words. And how many other pastors are pondering how to approach the business of politics in this new American environment.
Our friend also shared what was obviously a hand-made Christmas card with a beautiful piece of art painted on a piece of cloth. It was from a friend with whom she had shared a deeply personal tragedy many years before. 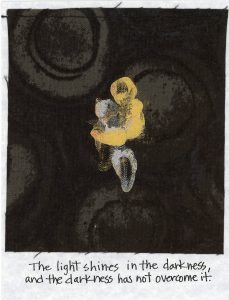 Her friends Christmas letter was profound, in part saying:
“My birthday on November 8th began with chilled champagne and the expectation of emotional celebration It ended with the appalling realization that life as we know it will never be the same – in the worst ways. With each new nomination and each middle-of-the-night tweet, the darkness has become more real and more frightening.
The Gospel of John contains no stable scene – no manger, angels, shepherds. No Christmas pageant script. It’ short and to the point: in the beginning was the Word…the light shines in the darkness…the Word became flesh….
In the midst of our discouragement we also sense the fires within to be torchbearers. We will surround ourselves with people we respect who will inspire us and light the way for us to think and act outside our comfort zone. We will donate more time and money to the organizations that support the values we hold dear. We will treat the environment with care. We will contact our legislators. We will be advocates for the people who will undoubtedly suffer discrimination, fear, and injustice under this administration. We will do what we can to welcome the stranger and feed the hungry. We will be the intentional in showing kindness and compassion.
We will do our best to be reflections of the Light. The Light that shines in the darkness.
Let your light so shine.”
POSTNOTE: In the last 30 miles to our friends town last Sunday, I got to thinking: there were, after all, almost 66,000,000 of us who voted for the candidate who won the election, but lost the electoral vote. What if, what if, every one of us committed, each week, in the next year, to do a single action aiming to positive change in direction of our country?
That would come out to nearly three and one half billion (3,500,000,000) actions.
How about it?
And I must also share this commentary from page 47 of the January 30, 2017 Time magazine: Time Jan 30 2017001. It speaks for itself.
https://thoughtstowardsabetterworld.org/wp-content/uploads/2022/04/thoughts-300x138-1.jpg 0 0 dickbernard https://thoughtstowardsabetterworld.org/wp-content/uploads/2022/04/thoughts-300x138-1.jpg dickbernard2017-02-03 12:29:562017-02-03 12:29:56Dick Bernard: The 15th day after inauguration.
0 replies