POSTNOTE: What follows, unedited, between the # signs, was saved yesterday morning, May 14,  at 9:20 a.m.  Ordinary  “Life” interfered so I didn’t get back to this until now, 4:33 a.m., May 15.  By habit , I get up early, and my first stop is the frequent Just Above Sunset, which I had read early yesterday, and again when I got the new edition early this morning.  Today’s post “Back to War Again”, is another several thousand words to motivate you.

“Back to War Again”, and “Expect Disastrous Results” (linked above and below) ought to raise citizen concerns, and stimulate action.  One can only hope.  My own warning, in my own amateur way, was being written yesterday, and I think I will publish it exactly where I had left it less than 24 hours ago.  I will probably add more to it later.  Executive Summary: Trump lusts for War, any kind of war, economic or military or [politics] makes no difference.   [Combat is his MO.  He’s also a coward, so never expect truth from him].

Unfortunately, as a  society, we are extremely comfortable with War under any name for any reason, however deadly the results, as the Chris Hedge’s 2002 book title so aptly says, “War is a Force That Gives Us Meaning“. We seem to love war.

For now, read on, and check back later, if you wish [edits to original  in brackets].  I will probably add more later – there were some other pieces of evidence I had seen, yesterday, which were additional concerns, and reminders.

If you’re interested in what the “big” people are saying about yesterday’s action re China, and continuing threats towards Iran by the man we elected in 2016, here’s several thousand words “Expect Disastrous Results”.

If you live in my general area, and want to hear in-person a very well informed person talk in person on May 20, check this out (scroll down to “The Changing Challenges of the Middle East in the Trump Era”).  When Dr. Beeman agreed to speak to our group, he suggested a generic title because the [Middle East] situation changes almost by the minute.  He is very well informed; I have heard him speak several times; his is a very informed opinion.

Likely we will have his remarks videotaped for later viewing.  Check back here once in awhile, perhaps in June.

In my tiny corner of the world – this blog – I have been easy on Donald Trump.  The first time I mentioned his name was here, in January, 2017.  I follow politics closely, and Trump is hard not to notice, so from the time he came down the escalator at Trump Tower to announce his candidacy in early 2016 I knew he was running, but other than noting he had absolutely no governing experience, I didn’t pile on, and haven’t.  The people spoke, albeit weakly – he lost the popular vote – but his administration has become a disaster, including the future of his core supporters.  But they’ll have to learn that for themselves, and they’ll probably then blame Hillary, like that forlorn guy I saw coming out of a tax man’s office in ND in March of 2014.  At that time I was helping my Uncle and I was visiting his tax man.  A guy had just come out of the office, and said to the world, that Hillary Clinton should be in jail.  Yes, I know, it didn’t make sense.  At the time she had been Secretary of State for several years, and had not been a U.S. Senator for a long while, and her role in Tax policy would have been a single vote now and then…but piling on Hillary had already started.

War always sells.   It is, also, always a disaster.  [Surely, there is time for a ‘victory lap’.  Even Hitler got that, start to finish for him, in his 1,000 year Reich, was perhaps 10 years.  Winners who covet their win at others expense ultimately lose, often big-time.]

The traditional way of doing War is going somewhere and killing someone and risking getting killed yourself.  Think World War I and II.  A succession of Presidents, beginning with Truman, knew that Vietnam would not work, but took the leap anyway due to elections they felt they would lose if they were soft on War in Vietnam.  [In differing ways, they all bowed to political expediency.]  The very public they pandered to, was the one ultimately hurt.

There are people around who will still argue that we “won” Vietnam; of course, there are still people who think Hitler was on the right track as well.

[Our] Twitter King is also the King of Threats.  But he’s never been to actual War where you have to send actual boys and girls, like my Marine grandson presently, to do the actual dirty work of War.

So we have, now, the War on China, through Tariffs, which supposedly are the magic elixir to make “America Great Again” though the People Who Know Something are not so optimistic.  To use the farmyard term, all Trump knows is bullshit, and he has a very, very long track record.

But the moment he made his surprised (to him) ascent to the presidency in 2017, he was way out of his league, and at some level he’s known that since the beginning, but lying has worked well for him…so far.  [Don’t expect his base to renounce him, even though they will all be among the victims of his reign.]

He, and we, are like the plane that has overshot the runway.  He’s the pilot (there would be no other way) who didn’t do the pre-flight preparations, [indeed, doesn’t even know how to fly,] and in one way or another, he [overshoots] the runway, and while we’re racing down to an uncertain end, he’s telling us to buck up and take our medicine.  All will be better (if we survive).

Trump is a fake.  What surprises is why it’s taken so long to figure that out.

A few days ago, I finally bought an actual paper copy of the New York Times, strictly for one article:  “Trump Tax Figures…” 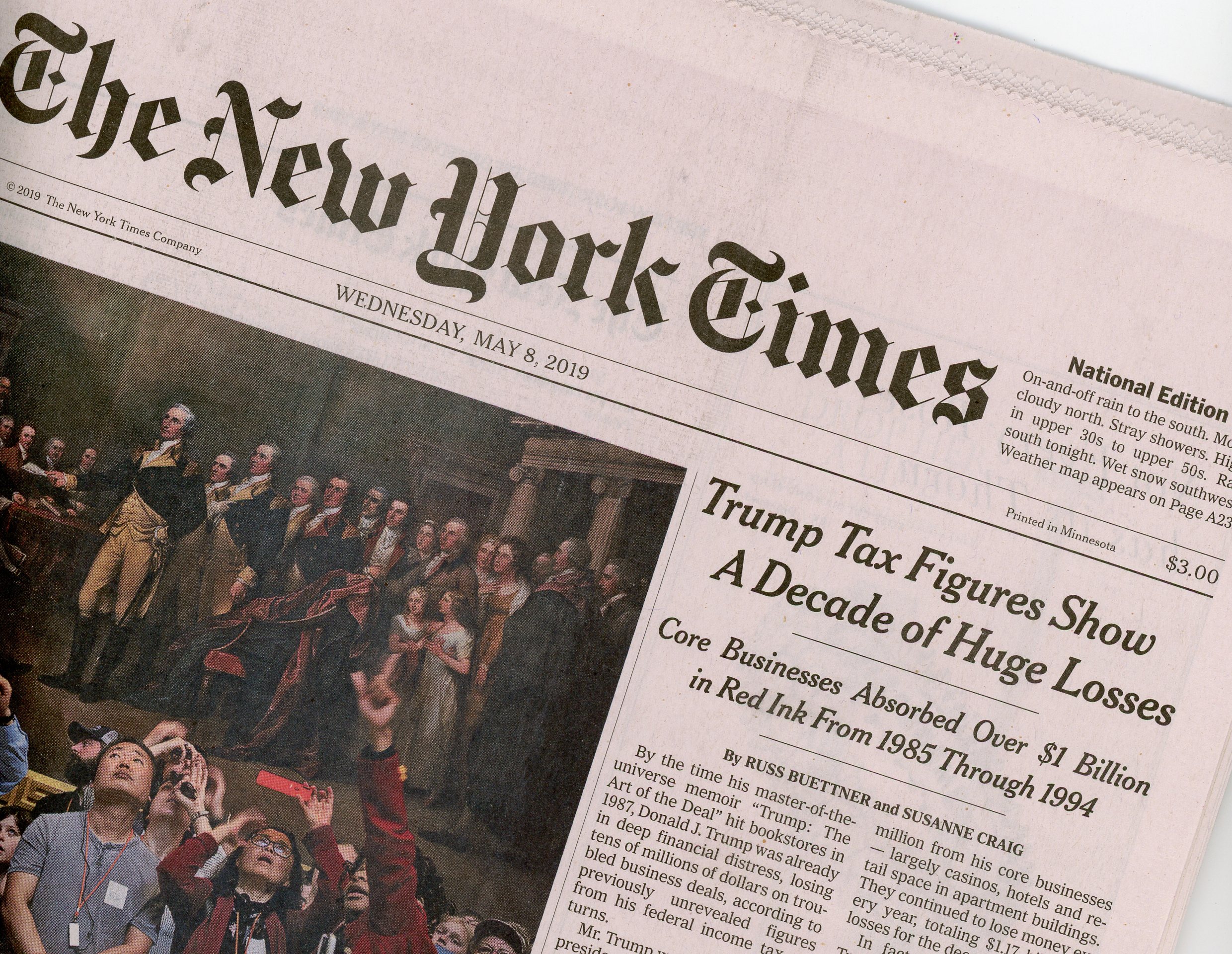 I could have read it on-line – we’re subscribers – but I wanted to see the visual presentation.  In any and all ways, Trump is and has always been a con-man.  For such an actor to succeed there need to be plenty of rubes, and we apparently are a ripe crop.

9:23 p.m. May 15.  There is so much to add to the previous, but at this point I say “what’s the point”.   Suffice to say that there are consequences at the end of this path, and we will all pay the price.

Personally, I think the act with the greatest potential for negative consequences for the people like ourselves is the famous tax bill of 2016.  It was structured to suck us in; when the bill comes due, which it will in a few years, we’ll know how thoroughly we were taken for a ride.  I think I’ll save it for a separate post.  Best we all open our eyes, while we have the opportunity.

from Jeff:  I don’t expect war, but I do expect some skirmishes like a few years ago.  Either way, not good at all.  And now it gives the appearance (reality) of “wag the dog”.