We take instant and universal communications for granted.

This past week – June 17 – marked the 50th anniversary of the Watergate break-in, June 17 1972, which led, ultimately, to the resignation, and almost immediately the pardon, of President Richard M. Nixon by successor President Gerald Ford in August, 1974.  A citizen today would have to be 65 or older to likely have any direct recollection of the implications of the aftermath of Watergate.  It was a crazy time.

In my recollection, there were, at the time, four television channels: CBS, NBC, ABC and fledgling PBS.  There was radio and newspaper, of course, but absolutely none of the ubiquitous other means to access information which are available today.

Back then, the hearings were carried live.  PBS recorded and played them back in the evening, so access in 1972 was limited.

Today, access is unlimited, 24 hours a day, everywhere.  But, who cares?  The answer should be obvious: everyone.  But we don’t need to…and we don’t….

So, the crucial aspect of communication is not its availability, but who will listen, and what they will listen to.  On this listening (or lack thereof) rests the future of our civil society.

In 50 years, communication has changed, dramatically.

Some years ago I had an unexpected opportunity to take a peak into past communication in this country of ours, in 1905-06.  What follows is a very brief look back – sort of a base line for today.

In 2000 the Busch family – my mother’s – undertook a major project: to de-construct the North Dakota farm home built by newlyweds Ferd and Rosa (Berning) Busch shortly after their marriage Feb. 28, 1905.

In the process, we found an empty syrup can in which was a bundle of about 100 letters sent to the farm in the first year of 1905-06.  They were all fascinating, and I later assembled them into a 479 page book of living history from that single year. 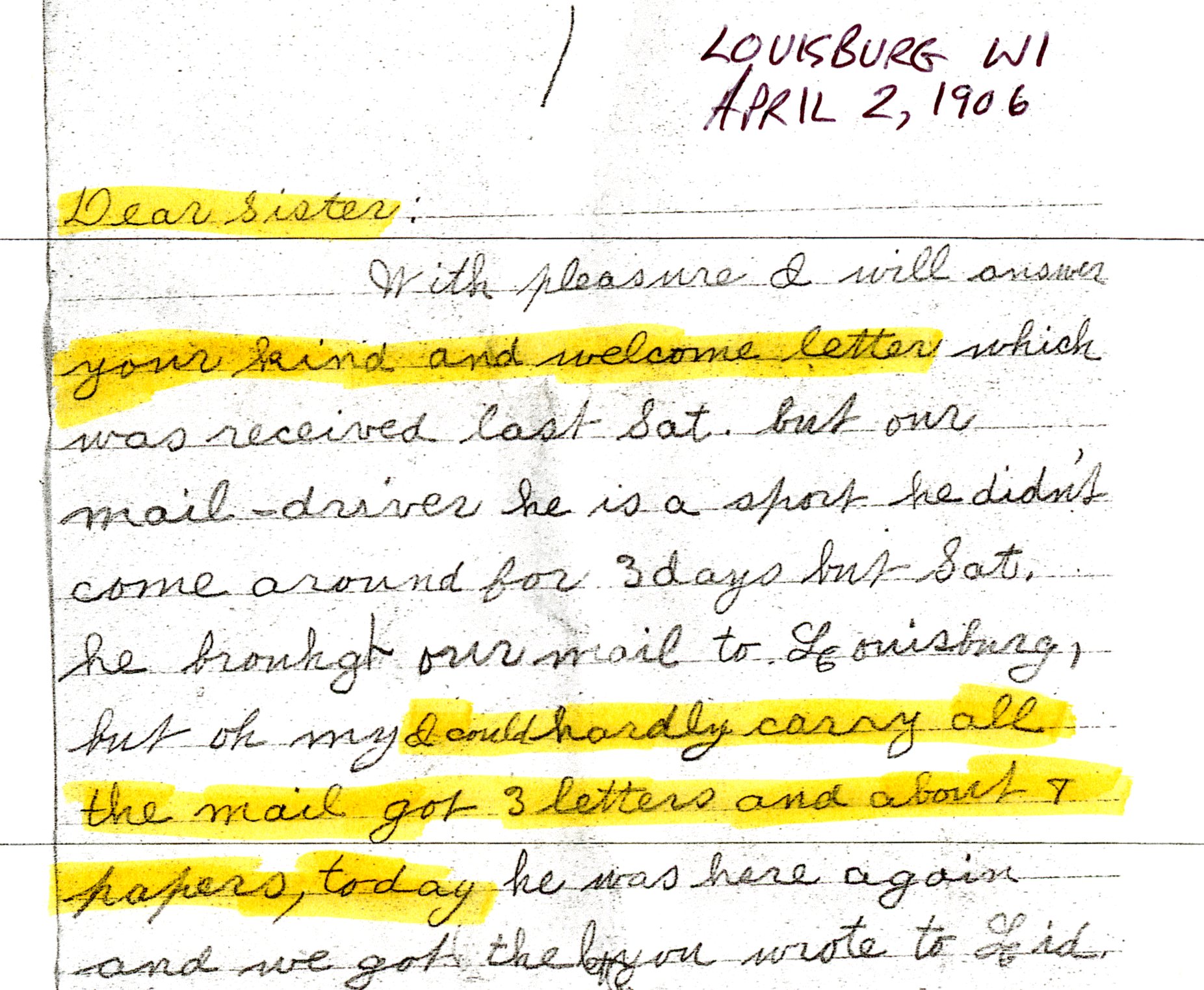 Text I wish to emphasize: “…I could hardly carry all the mail got 3 letters and about 8 papers….”

Compare your own mail from most recent days.  The papers Bertha references were likely in English and in German, local weekly and area (Dubuque or Galena), very likely some church related, and farm, catalogs, etc.  From personal witness years later, what was received at a farm postbox was read thoroughly.  Such publications were windows to the outside world.

Ferd and Rosa would self-identify as members of a large family living on a small farm, Rosa’s father was from German peasant roots.  She and her siblings were all obviously literate.  Other letters and other family memorabilia would indicate that they were comfortable, even literate, in German from the old country.  Their neighborhood, in rural Dubuque in the southwest corner of Wisconsin’s Grant County, was largely similarly rooted.

The other parents of both Fred and Rosa seemed less comfortable with writing, but they did occasionally write something.  The letters largely came from the kids of Rosa and Ferd’s generation.

Means of communicating in 1905-06 were very primitive compared to today.  Sometime that first year came notice of the first phone call in the Wisconsin farm neighborhood (“party line” phone didn’t reach Grandma and Grandpa until 1912, and didn’t change much for many years).  Phone was not for casual conversation.

There was telegraph, if you went to the depot, and trains were efficient in delivering the mail.  If there was an emergency, you found out quite quickly, but certainly not instantly.

And of course you had the tried and true: you actually had to talk to people face to face, including those you didn’t like, and you saw them in person – at church, in stores, at meetings and dances, etc.  They – all of them – were fall back for everyone else, and everyone knew this.

Today, everything is so convenient.  Anyone and everyone can self-isolate, and often we do.  But an individual, a town, a county, a state, a nation, a world cannot survive in isolation.

The sooner we figure this out, the better.