Sunday night we went to the Denzel Washington film interpreting August Wilson’s play “Fences”. The film is very powerful. Here is detail of showing places and times for your area.
Fences is one of ten August Wilson plays, representing the African-American experience in each of the ten decades of the 20th century. The play, like the film, largely takes place in the tiny back yard of a tiny apartment in the Hill District of Pittsburgh. One would presume the general setting is similar to where August Wilson grew up, at 1727 Bedford. The cast for Fences is all-star, and it would not surprise if the film is a candidate for one or more academy awards.
More about Fences, Wilson and his career can be read here.
It was serendipity that got me acquainted with August Wilson, and then his sister, and later his niece, Kimberley.
(click on photos to enlarge) 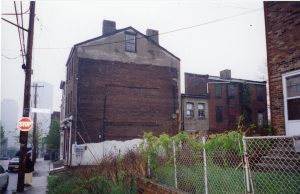 The photo above shows August Wilson’s boyhood home in 1998. The door can be seen in white at the rear of the building. Looking west, down the hill, the Pittsburgh downtown skyscrapers can be seen.
I took this and other photos on a rainy day.
My daughter Joni, and I, had the immense good fortune of getting the tour of August Wilson’s neighborhood with his sister, Freda.
Back in the late 1980s while living in Hibbing Minnesota I got a piece of junk mail from a new theatre in St. Paul, the Penumbra. Life then required many trips to St. Paul for meetings, and on one trip I went to some unremembered play at the theatre, and I liked it. In 1990, I attended Fences at the Penumbra. Penumbra was a small intimate theatre, and we were all near the stage. I remember this play, and it was powerful.
Along the way, I think I’ve seen all of Wilson’s ten plays (“The Pittsburgh Cycle”) at one time or another, almost all of them at the Penumbra.
It was awhile before I connected a few dots, and learned that I had met August Wilson “way back when”, about the time he moved to St. Paul.
It would have been about 1979 or so, and at the time I was volunteering on occasion at Little Brothers, Friends of the Elderly, on Lake Street in south Minneapolis. This particular day I was there at the time of lunch, and the person who cooked the meal for us and sat at the same table as I and the others was August Wilson, though, of course, I (or he, for that matter) had no idea of the celebrity he was to become not many years later.
Wilson had taken the job of cook because it interfered least with his passion to write, and his first play was first given a test run and performed during his time there, at the Playwright’s Center not far away on Franklin Avenue. It was “Black Bart and the Sacred Hills”. Some of the then staff at Little Brothers were among those who attended that reading. Black Bart… does not appear in the anthology of his works, but was nonetheless a successful play by him.
I met August Wilson one more time in the late 1990s. It was at a fundraiser of some sort, and my impression of him was that he was not comfortable being there – a quiet man out of his element. A little later I was to attend a conference in Pittsburgh and was introduced to his sister who, in turn, treated my daughter Joni and I to a long and very fascinating tour of his and her Hill District, the setting of most of his plays.
I feel especially honored to have had the opportunity to get to know August Wilson and his world a tiny bit more than most.
I hope you can see Fences. 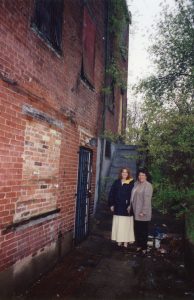 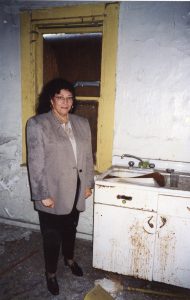 Freda in kitchen of the apartment at 1727 Bedford, Pittsburgh Apr 98. 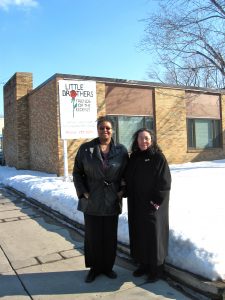 Dr. Kimberley C. Ellis can be found here; Freda Ellis passed away in Pittsburgh in 2015.
COMMENTS:
from Laura, who knew August in the Little Brothers days: Of course, I saw Fences(movie). I sat next to August on the opening of Fences, the play, at Penumbra. I cried during the movie. August definitely would have approved.
from Thad, who knew August well at Little Brothers: Thank you very much for the link to your blog. In fact, and you won’t believe this, I just saw “Fences” today. The film ended at 7:00 pm and here I am emailing you half an hours later. What a coincidence. Anyway, I was really moved and like you, feel really privileged to have known August for the time he worked at Little Brothers.
https://thoughtstowardsabetterworld.org/wp-content/uploads/2022/04/thoughts-300x138-1.jpg 0 0 dickbernard https://thoughtstowardsabetterworld.org/wp-content/uploads/2022/04/thoughts-300x138-1.jpg dickbernard2017-01-16 18:05:492017-01-16 18:05:49August Wilson's "Fences"
0 replies

#1203: The Time of Donald J. Trump begins one week from today. Friday, January 20, 2017. Some Thoughts Towards A Better World
Scroll to top