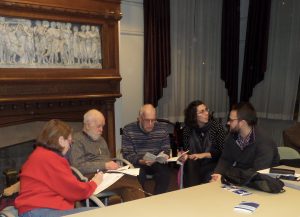 Participants at Third Thursday divided into small groups to take a quick look at one of the three treaties under discussion. This is one of the groups.

Last night I was at a meeting of 27 people, sponsored by Citizens for Global Solutions MN. I’m VP of the group, so I know the back story of this “Third Thursday” progam. The program was recommended before the Nov. 8 election; it turned out to be a very interesting discussion around three important United Nations documents: “The Convention on the Elimination of All Forms of Discrimination Against Women”; “The UN Convention on the Rights of the Child”; “UN Convention on the Rights of Persons With Disabilities”. (the links cited are very lengthy point of source documents. We worked from summary documents provided by the University of Minnesota Human Rights Center. See photo below). 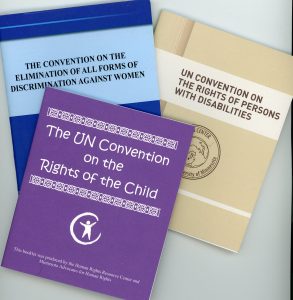 At such conversations, you rapidly learn about how complex seemingly simple things are; and in two hours we could barely scratch the surface.
After the meeting, I gave Dr. Joe Schwartzberg a ride home. We debriefed the evening, and the implications of what is ahead. Joe is an International Emeritus Professor at the University of Minnesota, and an acknowledged expert of the United Nations System. His recent book, “Transforming the United Nations System. Designs for a Workable World“, would, in itself, occupy several weeks of discussion in a book club setting. I know, I participated in such a group a couple of years ago.
Such is how it went for me the night before todays inauguration.
*
We are a nation of very good people, generally. Look around you. Most recently, this fact was brought home to me in the January, 2017 issue of the Washington Spectator, a small publication to which I have long subscribed. You can read it here: Spectator001. We also live in a world chock-full of very good people. People in my group wonder what we can do now and later. Here is a guide. I’d suggest passing these along, and printing both out for future reference.
*
So, what to do today, being among the category of citizens some would call “losers”; and taunt “get over it”?
I looked on my always messy home office desk Wednesday night to see if there was something there which demonstrated my feelings at this point in our history. I found two items:
(click to enlarge) 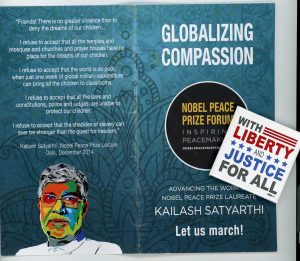 Nobel Peace Prize Forum, Bloomington MN 2016, and button, Liberty and Justice for All, acquired at some time in the past.