This week, President Biden announced the intent of the U.S. to take all remaining U.S. troops out of Afghanistan by September 11, 2021, the 20th anniversary of 9-11-01.  The news is predictable, as presented by all ‘sides’, from extreme right to extreme left.  Most every opinion is expressed with absolute certainty.  There is no room for nuance or other points of view.

October 7, 2001, when the bombs began to drop on Afghanistan, is when I became a peace activist.  I could see no short or long term good coming out of the action.  I’m no prophet, but that prediction did turn out to be prophetic.  There are many, today, who will say we should stay there forever; that Biden is weak, and Obama.  So be it.  We made our bed when we chose bombs after 9-11-2001….

Yesterday I found the actual news clipping which I kept from the newspaper of October 8, 2001.  Here it is in photo and pdf form: Afghanistan Bombing Oct 10 2001. 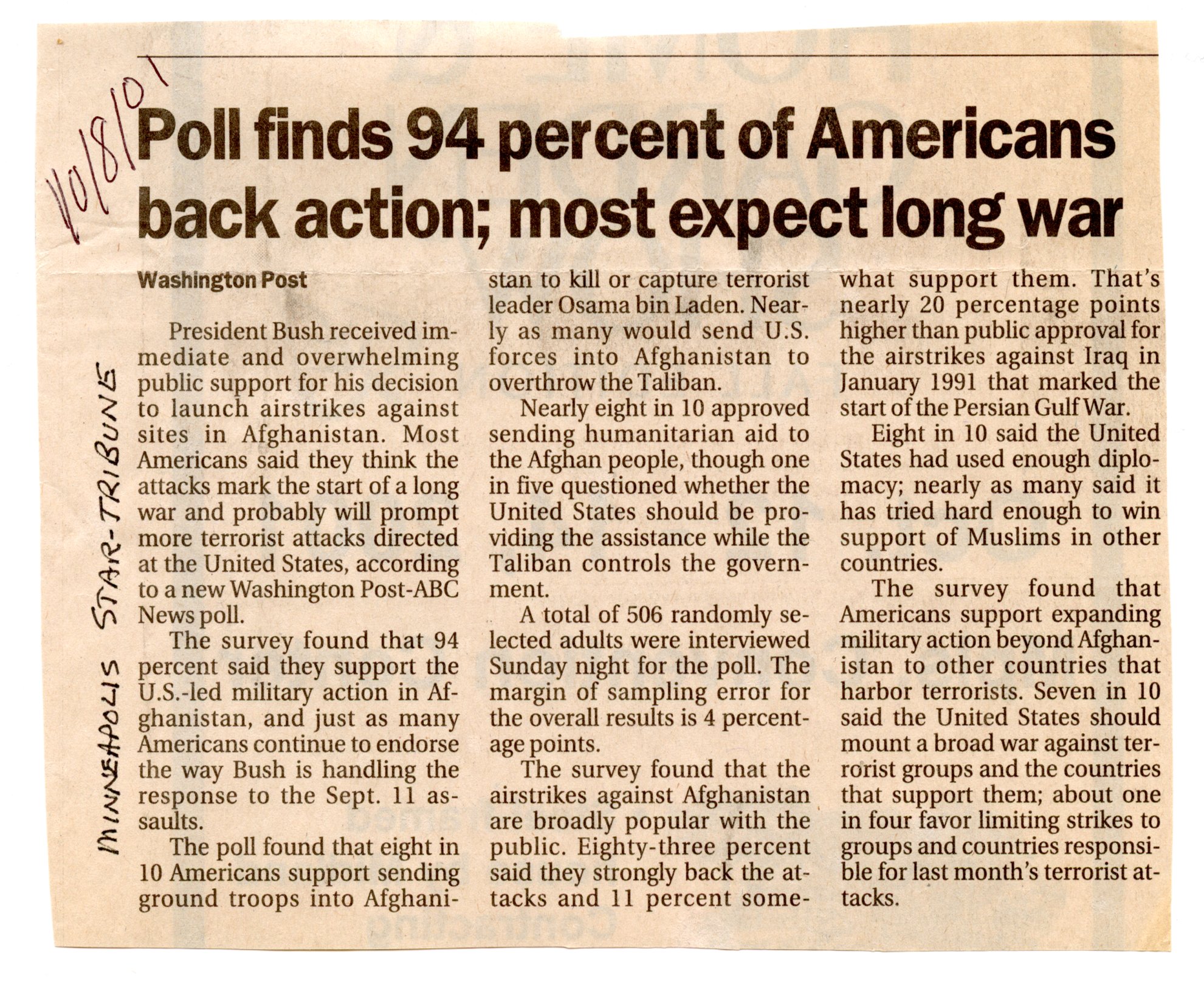 Some months later, I submitted an op ed to the same Star Tribune, which I hoped would be printed on the six month anniversary of 9-11-01, but which ultimately reached the printed page on April 20, 2002.  You can read it here: Afghanistan column 4:2002 (click to enlarge).  You will note not a single mention of “Iraq” in that column.  Iraq was not yet part of the public conversation.  It actually was the first day of Spring 2003 when the bombing of Iraq began.  (A few years ago I did a chart for my grandson, then a high school junior, now a Marine, about the cost of War: War Deaths U.S.002.  For anyone interested, at the time of 9-11-01  and immediately thereafter, here is what I wrote: Post 9-11-01001.)

The rest of the 20 years is history which speaks for itself.

As noted in the article in 2001, going to war was popular.   It seems simpler to whip people into a frenzy about some ‘other’, than to seek an enduring peace, what is called “the force of law” (as distinguished from “the law of force”).

As it happened, Thursday of this week about 30 of us gathered via Zoom to talk about a very notable film, The Mauritanian, about one of the slimy undersides of the Iraq-Afghanistan era – the infamous prison at Guantanamo Bay Cuba, and one of its inmates Mohamedou Ould Slahi, imprisoned for years without charges, tortured into a ‘confession’, and now released.  We were very privileged to be joined on our discussion by both Slahi, and his attorney, Nancy Hollander.  (The recording may already be available, or certainly in the near future, at Global Solutions Minnesota).  Of course there were other, probably even worse, ad hoc U.S. government prisons in other countries.  But Guantanamo deserves a spotlight.

It is very worthwhile to watch the film before watching the conversation.  In addition, Slahi has authored a book, now translated into 27 languages, about his experience.  Details here.

The uncomfortable part of this brief column is that all of us, in assorted ways, are and have always been complicit by action and inaction in our history as a country.  We do this through the election of our representatives at all levels in every election.  We portray ourselves as the very model of the best features of democracy; but we betray that very democracy very often.

When I was one of the 6% against the bombing of Afghanistan, I found out how lonely a position it was.  It is now 20 years later, and what have we accomplished, really?

WE are the United States, not him, or them, or someone else.

POSTNOTE: for those in the Twin Cities, at 3 p.m. tomorrow, on the TPT Life Channel at 3 p.m., the great story of Garry Davis, World Citizen, whose youthful ideals were put to the test during and after WWII.  The same film is being shown in many PBS stations across the U.S. this month – last number I had was 65 stations.  Check your own station for details, and if it isn’t on the schedule recommend it.