There are 15 comments thus far at the originating post, here.  Your comments are welcome.  Check back once in awhile.  I will have two or three new posts in the next several days, trying for a little variety/diversion from this story which will last far beyond this week. 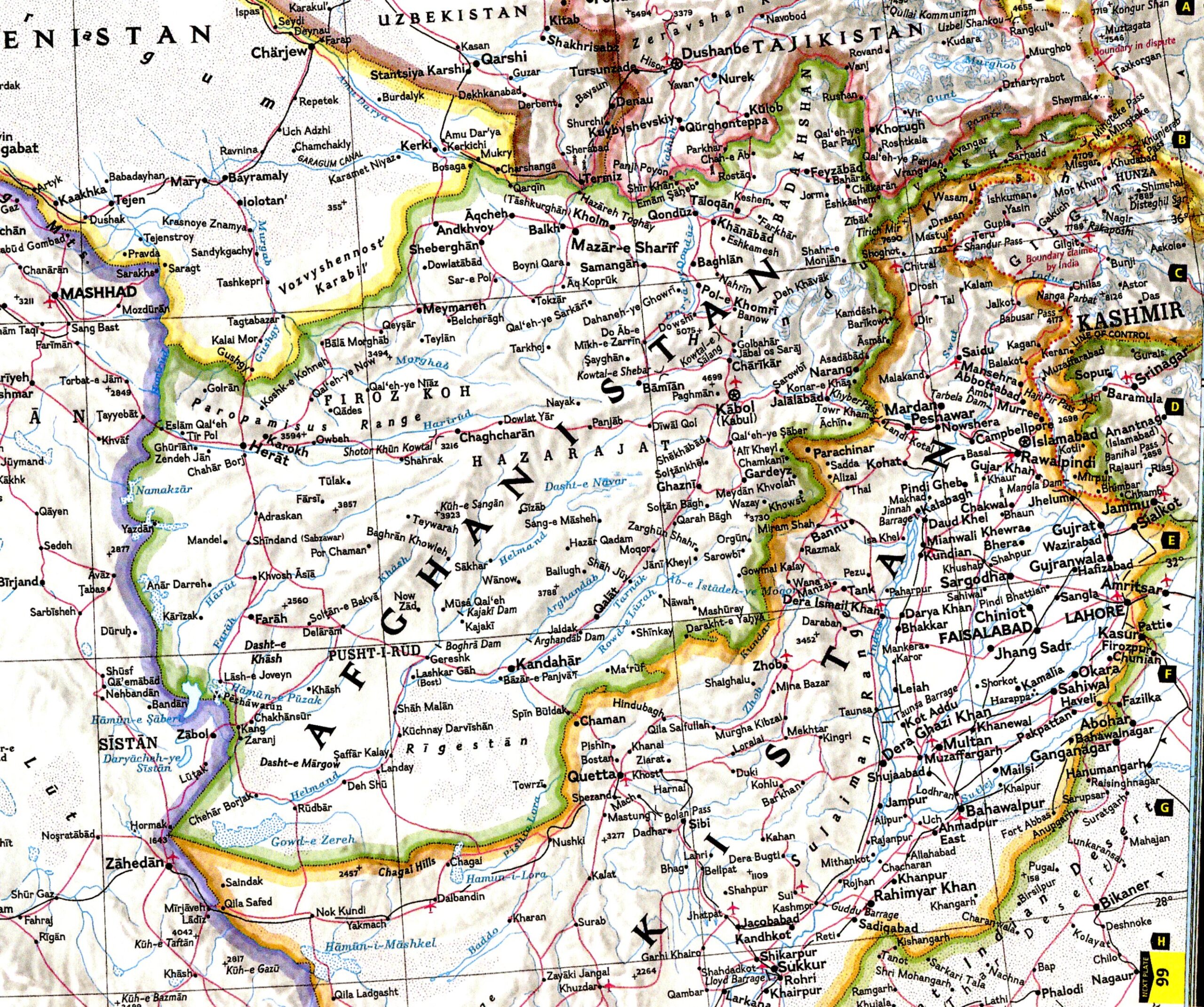 Afghanistan is almost exactly the size of Texas; and has about one-third more people.  It land-locked, several hundred miles away from access to any of the world’s oceans.  It is bordered on Iran to the west, Pakistan to the east and south, and the assorted ‘stans of the old Soviet Union.  I can’t help wondering how substantively politically different the Taliban regime will be from the current Texas regime.  Just put the recent news side-by-side.

My brother John, a Vietnam vet, recently passed along a couple of pertinent writings he came across.

This comes from Rudyard Kipling “The Naulahka“.  It is none too subtle.  The entire poem is as direct.

Here’s John’s editorial comment: “It’s pretty axiomatic to me that US involvement overseas follows a long tradition of European colonialism, in which the primary reason for involvement overseas is trade/money for homeland investors who eventually need military support to ensure that their business continues to thrive. Shoot, the problem probably traces all the way back to the Roman and Greek fleets and legions – and as technology in transportation evolved and became more rapid, it became easier to continue the exploitation. Obviously there are people who are not profit motivated, but those noble causes become secondary and even tertiary: Business, cultural appropriation; and then humanitarian seems to me to be the ultimate pecking order in human interaction.”

John likes to bicycle, and recently he came across something he’d informally sought out for years: the plaque remembering the signing of the UN Charter in San Francisco in 1945.  He took this photo (I’ve included the verbiage after the photo, since it is somewhat difficult to make out.) from John: “[Plaque recently seen] in the lobby of the Herbst Theater at the War Memorial Opera House in San Francisco” 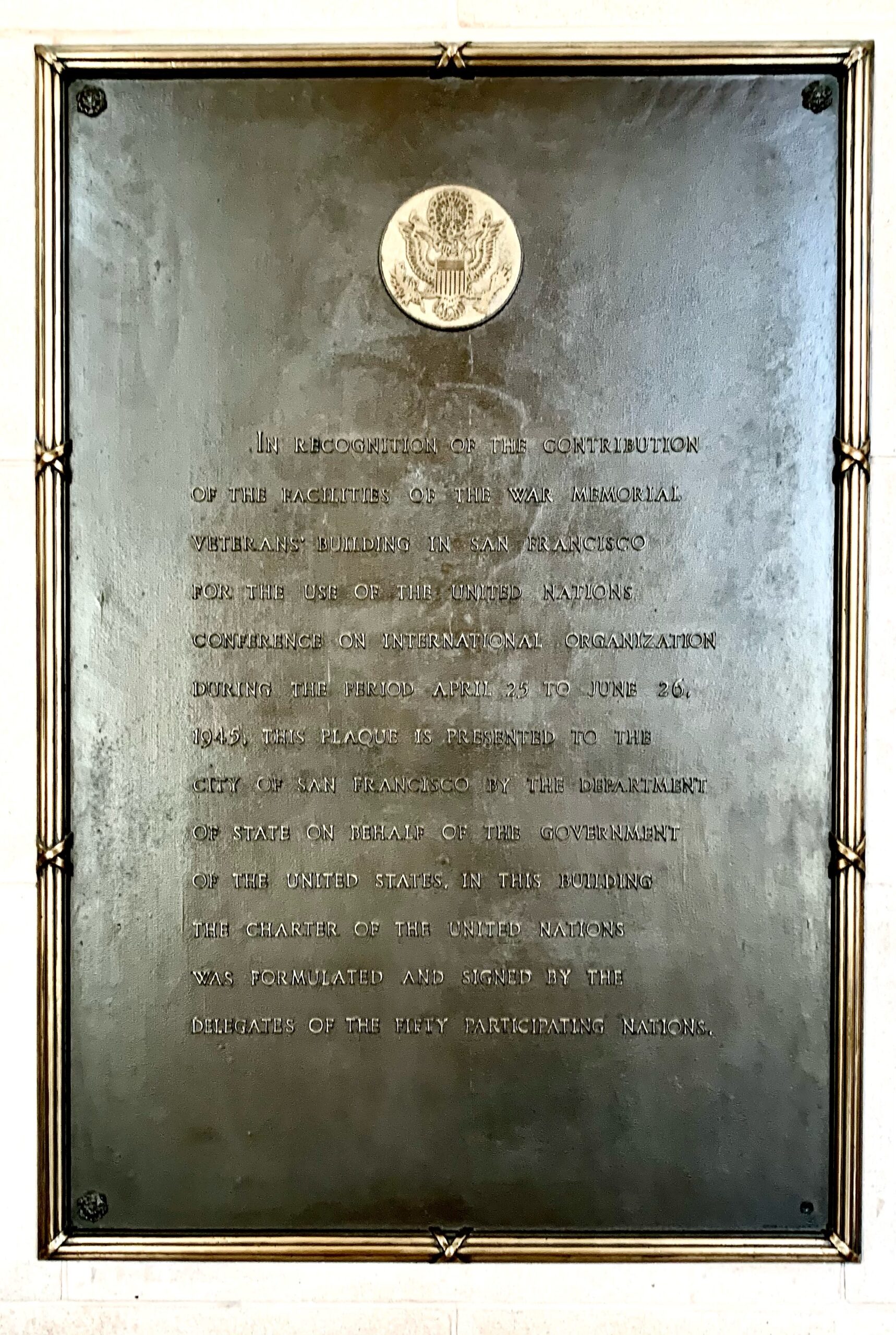 “In recognition of the contribution of the facilities of the War Memorial Veterans building in San Francisco for the use of the United Nations  Conference on International organization during the period April 25 to June 26, 1945.  This plaque is presented to the city of San Francisco by the Department of State on behalf of the Government of the United States.  In this building the Charter of the United Nations was formulated and signed by the delegates of the fifty participating nations.”

Here are the 50 nations who signed the Charter in 1945.  Today there are 193 member nations.  The complexion of the world was a bit different then, than now.  World War II had not ended, but was on its last legs.  “India” was part of the British Empire, and included what is now India, Bangladesh and Pakistan and perhaps some other current neighbor states.  Personal comment: the UN is far, far from perfect, and never has been perfect, but is far better than nothing.  It’s up to all of us to work for better.

My favorite quote remains this attributed to Margaret Mead: “Never doubt that a small group of thoughtful, committed citizens can change the world, indeed it is the only thing that ever has.”

from Terrence: I just finished PREVENTABLE earlier this week. It was very interesting. Last week I finished a large print book I picked up at the Woodbury Library entitled : Mussolini and the Pope. It was written in about 2015 after many but not all Vatican records were made public. It reads like a blueprint of “Trump & the Republican Party”.