Directly related: here
Last night Paul Chappell inspired nearly 300 of us at the Annual Celebration of the Minnesota Alliance of Peacemakers at Landmark Center in St. Paul. “Is World Peace Possible?” was his topic. Of course, the answer is “yes”, but one needs both to believe that possibility and work towards the goal rather than get mired in a sense of futility. 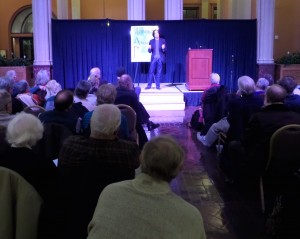 His essential message, as I heard it, is this: by nature, the overwhelming vast majority of we humans are not a violent people. All we need to do is look inside ourselves.
And good change happens. It has happened. It continues to happen.
Look back a few hundred years and recall what you learned about slavery, the virtually total absence of womens rights, the intolerance of ages past, for example, against the Irish, etc. We’re in a much better place today.
Who is to say that we can’t be in an even better place 100 years from now? Why not work towards a better world with hope, rather than descend into despair?
It all resides in our attitude, our belief that we can make a difference, our willingness to work, one act at a time, for that better world.
Success is in each one of us, not some “he” or “she” or “them”. It only takes a few to be the catalyst. Looking back, Mr. Chappell said, only about 1% of the population were activists in the civil rights movement; only 1% in the women’s rights movement.
Why not become part of that 1%, that one of 100? The message, as I heard it, is very simple: do something good, share it with those you know, work together and good will follow.
Paraphrasing Forrest Gump, “good stuff happens”. Each of us are the essential vehicle for that good stuff.
Of course, it takes far more than just listening to a speech, or to keep on doing only as we’ve always done….
Which causes me to think back to a familiar song by an obscure songwriter, whose title leads this post.
Twice in my life I’ve heard memorable renditions of “Last night I had the strangest dream”, the circa 1950 Ed McCurdy peace anthem made famous by singer John Denver in the hottest days of the Vietnam War of the 1960s and 1970s.
Last night I had the strangest dream
I never dreamed before
I dreamed the world had all agreed
To put an end to war
I dreamed I saw a mighty room
The room was filled with men
And the paper they were signing said
They’d never fight again
The first memorable rendition was June, 2007, when an elderly (but perpetually young) man I barely knew, Lynn Elling, rose at the annual meeting of World Citizen, a group he had founded, and led us in the song. He inspired me that day.
The second time was Armistice Day (Nov. 11, 2014) at the USS Ward Memorial on the Minnesota State Capitol grounds. There another elder (but perpetually young) lady I know, Sr. Bridget McDonald CSJ of the McDonald sisters, led us in the same song. Ours was a very chilly (in a weather sense) but spirited rendition! 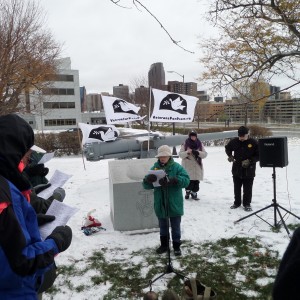 And when the papers all were signed
And a million copies made
They all joined hands and bowed their heads
And grateful prayers were prayed
And the people in the streets below
Were dancing round and round
And guns and swords and uniforms
Were scattered on the ground
My favorite rendition of Mr. Denver singing “last night…” does not come up on an internet search, but nonetheless is hidden in plain sight on YouTube.
On a particular afternoon later the same summer of 2007 I visited Lynn and Donna Elling at their home. He brought out from a closet a 16mm 30 minute film he produced in 1972 featuring the political and civic elite of the Twin Cities. That film, called “Man’s Next Giant Leap”, was of course unusable in its existing format, so I urged Mr. Elling to get it converted to DVD, which he almost immediately did. .
That film, Man’s Next Giant Leap (1972), featuring John Denver singing “Last night I had the strangest dream” in a Minneapolis suburban home about 1971, can be viewed in its entirety on YouTube, search “Man’s Next Giant Leap”.
Mr. Denver donated an entire day to the film project. Early in the film, in two segments, John Denver sings the song. Elsewhere in the film, he is interviewed about peace.
It was, and is, as Mr. Elling likes to say, “precious”.
Last night, Mr. Elling, nearing 94 and still full of spirit, could not be at the hall to hear Mr. Chappell, but was there in spirit.
And as I listened to the remarkable Paul Chappell share his insights (which I heard in more detail at a workshop on Saturday) I was thinking to myself about the connections between song writer Ed McCurdy, balladeer John Denver, Lynn Elling, Sr. Bridget McDonald, Paul Chappell, and everyone of us interested in making McCurdey’s dream an ultimate reality.
Last night I had the strangest dream
I never dreamed before
I dreamed the world had all agreed
To put an end to war 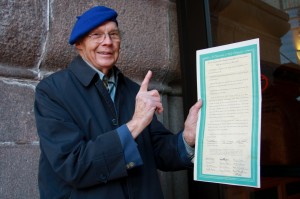 Lynn Elling with Hennepin County/ Minneapolis MN Declaration of World Citizenship, Jan 3, 2013. The Declaration was signed March 5, 1968, by all major civic and political leaders of the area.

Postscript: The above Declaration and the accompanying flying of the United Nations flag from May 1, 1968, till March 27, 2012, was a remarkable and once again unfinished story. Read more about its history and events preceding and following here.
Comment from Kathy M: I was impressed with him as a person and appreciated what he has put together.
His multiple examples of the changes our culture has made in so many areas was indeed encouraging. We have seen those changes in our life times and the cultural tolerance for violence and war may also shift.
I also loved how he elucidated the ways we use language that perpetuates prejudice such as collateral damage, terrorists, etc. and the ways the media scares the public that reinforces prejudice. I have used the “likely to be killed by a piece of furniture in your home as by a terrorist” several times already.
He was a breath of fresh thinking. The government/military bashing which, though I might agree with, gets tiresome and seems to lead into a dead end. I would like to hear more from him…thinking of getting his book…
https://thoughtstowardsabetterworld.org/wp-content/uploads/2022/04/thoughts-300x138-1.jpg 0 0 dickbernard https://thoughtstowardsabetterworld.org/wp-content/uploads/2022/04/thoughts-300x138-1.jpg dickbernard2014-11-18 17:29:492014-11-18 17:29:49#957 – Dick Bernard: "Last night I had the strangest dream…."
0 replies