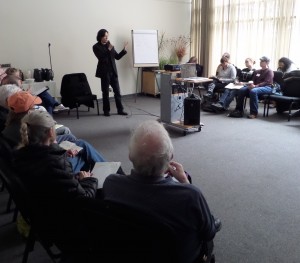 There were 26 of us in attendance, 10 who I knew. Chappell’s presentation was very stimulating. He is a great teacher (which involves much more than simply presenting information).
Based on my own personal experience, I would very highly recommend attendance at any of Paul’s Twin Cities talks, as follows:
Sun. Nov. 16, 9-10 a.m. at Plymouth Congregational Church, Minneapolis, “Why is peace possible?”
Mon. Nov. 17, program begins 6 p.m. at Landmark Center, St. Paul, “Is World Peace Possible?” (Here is the flier for Nov. 17: Paul Chappell001)
Tue. Nov. 18, 11:30-1:00 p.m. at Veterans Ministry Roundtable at Our Saviors Lutheran Church, Minneapolis, “Creating your own inner peace as a veteran”.
Typically, I attend sessions like this as a listener/learner. This doesn’t leave time for note taking. I am more interested in where the conversation leads me. This was certainly true today. Likely the other participants had their own “ah ha” moments like I did. For assorted reasons known to us all, we have unique components to our own life experiences.
My family history is immersed in military service: Dad’s brother, Frank Bernard, went down with the Arizona at Pearl Harbor, Dec. 7, 1941. He had been a crewman on the Arizona for near six years. My brothers and I are military veterans, me, a two year Infantry enlisted man 1962-63; they both career Air Force officers, including Vietnam. To make an entire list of family members who served would be a long recitation.
In some of the gatherings from the ancestral ND home farm I just came across a Dec. 13, 1945, Christmas card from a neighbor of my grandparents, who was in service at Scott Field IL. He was one of many who finished high school in 1945, and left immediately for the service.
I think the sender of the card was cousin or brother of one local boy who, Grandma wrote Aug 20, 1944, was “killed July 2 on Saipan in action.” She sent that letter to her son, a Naval officer on a Destroyer in the Pacific. The potential cost of war was never far from people in my own family. On the other hand, a human consequence of war – one of many – is to dehumanize the other “side” with all the predictable consequences….. (Even talk about war is very complicated. More about the end of WWII from the family perspective here:Atomic Bomb 1945001)
My “takeaways”, when I left this afternoon, were simple:
1. To pass along a strong recommendation to everyone to take the opportunity to hear Paul Chappell in person sometime the next three days.
2. To stay engaged in the witness for peace, as opposed to defense of endless and deadly war, while recognizing that the issue is very complex with many differing opinions. (Even in our own group, all peace people, there were differences of perspective.)
Personally I’ve been active in peace and justice community since October 2001. I could see no good coming out of bombing Afghanistan.
But my witness goes a bit further back. Particularly, I close with a portion of my year-end “card” written in November, 1982:
Bernard card 1982001 Note especially the second page. 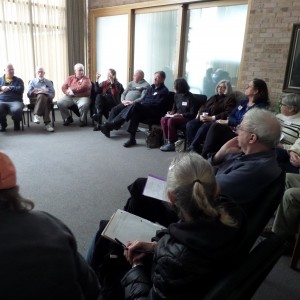