The below, above the postnote, was written Tuesday, January 28, before the Presidents State of the Union.
The public relations battle around the State of the Union of the U.S., by far the richest country on earth*, will likely be around, in one way or another, America’s middle class, the haves and the have nots, the wealthy and the super-wealthy and the 99%…. The 1% always seem to seize what they consider the high ground. Where are the 99%, and why? That’s for side discussions.
1. Sunday, we took our 9th grade grandson over to Basilica of St. Mary to help with the preparation of the Undercroft (fancy word for Church Basement) for a program called Families Moving Forward, a partnership of a number of Churches who offer their facilities for a week to give overnight housing to temporarily homeless families. This particular week, there are four families who have taken up residence there, one with four children. These are families where someone is working for pay somewhere. At least one of the families has been told, since September, that they have an apartment, but the apartment owner keeps delaying their move-in, now five months later**.
It’s the “other side of town”, literally, from us. We’ve worked on occasion with this program. Our grandson was along because one of his class assignments was to volunteer for at least six hours at something. Sunday afternoon was a part of those six hours, setting up the undercroft.
(click on all photos to enlarge) 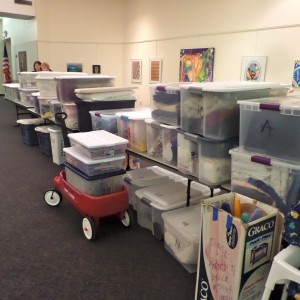 Tubs of sheets, pillows, et al, ready for set up. They’re kept at the Church for use every few weeks. Volunteers do laundry at end of the week. 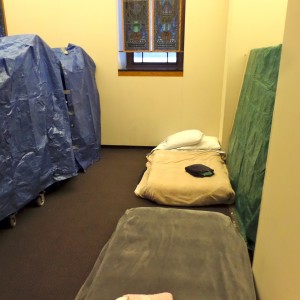 A two bed room, probably for Mom and child. Note the privacy walls. 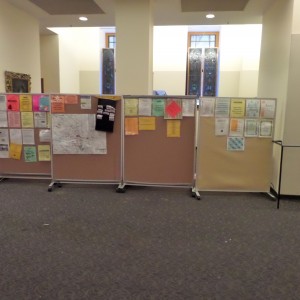 The “doorway” to the room

Even knowing the reality these families are living this week, and some have for many weeks, and even actually being there, setting up those rooms, the exercise is still an abstract one difficult for me to fully comprehend.
Even in the worst times – and I’ve had some – I’ve never been “homeless”. And now I’m fairly ordinary retired “Middle Class” and definitely not “poor”, though I had a couple of very close brushes with that state in my adult life.
A couple of hours after arriving, we left the Undercroft for a windy, chilly, Minneapolis. A number of homeless folks, adults, were in the entrance to the Basilica, warming up before going back out on the street. They’re likely out on the street today as well. I’m in comfy circumstances here at home writing about them, all of whom will be functionally “homeless” tonight in below zero weather.
2. Ten years ago, December, 2003, I was in Haiti for the first time. Haiti, then and now, is among the poorest countries on earth, less than two hours east of Miami, Florida.
One evening, our driver invited us to his home on a hillside overlooking prosperous Petion-ville. I took the below photo from the roof of his small cement block house on the side of the hill. His wife and young child were delightful hosts. The hill neighborhood was, I would guess, reasonably middle class by Haiti standards. I don’t know how his place fared in the earthquake in January, 2010. I do know the family survived. 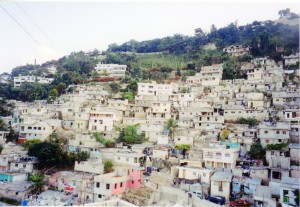 Hillside homes above Petion-Ville (above Port-au-Prince) Haiti December, 2003. Taken from the roof of one of the concrete block homes by Dick Bernard

When I took the picture, my focus was on the neighborhood around our hosts house.
Today, I’m focused on the houses you can see at the very top of the hill, separated by walls and fences from those below. Your computer may allow you to zoom in on them.
Haiti has fabulously rich people too: they move comfortably between the U.S. and France and other places and back to Haiti. They’ve made their wealth in various legal ways, and they still make the rules. Haiti in that regard is not much different than the ideal United States as envisioned by the advocates for the worthy wealthy.
The very rich live within, but harshly separate from, the very poor nearby.
3. There is seldom attention to the downside of a huge gap between rich and poor. Sooner or later, as in Haiti, the rich become prisoners with in their own country, living behind walls with their own armed guards to remove any suggestion of the rabble invading. They cannot truly live free. I’ve seen the same in another third world country.
There are a lot of other consequences like, the poor cannot afford to buy the stuff that adds to the riches of the rich…. Poverty has consequences even for the rich.
It’s not a healthy state, and we’re moving in this direction, perhaps more quickly than we’d like to imagine.
We need some perspective, soon, and serious attention to closing this gap.
Polls now show that I’m not alone in my concern. Americans don’t mind wealth. They do mind an ever more greedy approach to personal wealth and power. We’ll see in November if they act on their attitudes.
* The United States as a country has 5% of the world’s population and 25% of the world’s wealth. Haiti, referred to in #3, below, has .142% of the world’s population, and .008% of the world’s wealth. (Data from Appendix 1 of Transforming the United Nations System by Dr. Joseph Schwartzberg, United Nations University Press, 2013, comparing Population and Gross National Income)
** Some years ago at the same Basilica Families Moving Forward, four of the guests were a family of four, husband, wife and two teenage daughters. The drama of the evening was the husband being criticized for causing the family to lose the chance at an apartment, where they failed to make an appointment. Listening to this, it turned out that the husband had two jobs and one car, and the apartment was difficult to reach, and they lost their chance at housing….

POSTNOTES Thursday, January 30:
This mornings Just Above Sunset, always very long, gives a most interesting perspective on the general issue of rich and poor. If you wish, here.
Tuesday afternoon, we took our grandson and his Mom to “Twelve Years a Slave“, the powerful film about a free Negro from Saratoga NY who was sold into slavery into 1841, was a slave until 1853, and lived to write and speak about the terrible experience.
It is not a comfortable film. Nonetheless, I strongly recommend it. Ryan, our grandson, who asked to go to it in the first place, pronounced it good as well.
For me, watching, the film made lots of connections already known, more clear. Plantation owners felt no shame whatsoever in their entitlement. They drew their support from the Hebrew Scriptures (the Old Testament), the good old days, when Masters were men and women were subordinate and slaves were slaves, property.
We were born as a slave nation over 200 years ago, and we’re far from over it today.
But neither are we going back to where we were.
My class, “old white men” tend to vote to go back to the “good old days” – last presidential election I recall President Obama lost to Mitt Romney in this class getting only 40% of their vote.
But they didn’t prevail. And their numbers will continue to decrease, at an increasing rate.
This doesn’t prevent some of them to continue to be very bitter. I get some of the “forwards”, and even some personal invective once in awhile.
But the “times, they are a’changin’ ”
https://thoughtstowardsabetterworld.org/wp-content/uploads/2022/04/thoughts-300x138-1.jpg 0 0 dickbernard https://thoughtstowardsabetterworld.org/wp-content/uploads/2022/04/thoughts-300x138-1.jpg dickbernard2014-01-30 05:34:452014-01-30 05:34:45#838 – Dick Bernard: Poverty. Seeing Reality, and Consequences of Ignoring that Reality.
0 replies