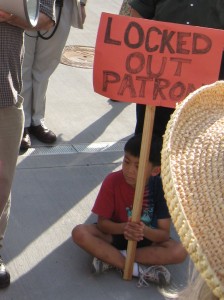 The Minnesota Orchestra Managements full page ad in the Sunday Minneapolis Star Tribune ominously said: “Eight days left….”
Today is Thursday. That must mean there are four days left, which means next Monday is the day.
According to the folks who approved the copy for the ad, anyway.
I wonder how I’d vote, if in the Orchestra, 11 months locked out, having had to subsist with other than Orchestra pay or benefits, faced with an offer which at this point can only be one to save face for Orchestra Management.
Sharks don’t do deals, other than to win….
There is less question how I’d vote as a locked out patron, who didn’t have an opportunity to use any of my 2012-13 season tickets.
Of course, we patrons (aka audience, listeners) appear to not much matter.
For this single listener, the end of the Orchestra as we knew it happened back in January, 2013; but the beginning of the end probably began over a small lunch or dinner at a fancy restaurant somewhere back around the near collapse of our economy in 2008, five Septembers ago, when a few powerful people shared some ideas about making the Big Dreams they had into reality. There is, after all, great profit to be made from adversity, if you know how to play the money game. And there are different definitions of “profit”, too.
There are probably some scribbled ideas on sheets of paper somewhere about
how to exploit a near economic catastrophe as an excuse, in other words.
Or, perhaps there is no definable “ground zero”. It just evolved.
I speak as a single audience member, simply a long term account number at the Minnesota Orchestra (who seems, to my knowledge, to have been ‘disappeared’ from the Orchestra managements ordinary communication network.)
For some time now I have said, including more than once in this and other blogposts, that I’ll return to Orchestra Hall if and only if the Musicians Union ratifies a new contract. (This does not mean a “kick the can down the road” temporary agreement.)
But even if I’m back, the reality remains: without major changes in how business is done at Orchestra Management level, including who is permitted to be on the Board, the new Orchestra Hall will be a monument to failure of management and not to success.
To me, the Minnesota Orchestra of 110 years has been killed.
*
There are many models (mindsets, I’ll call them) which could have been followed to avoid this pending Armageddon.
Just for perspective, here are a couple of examples, compared against the current apparent model:
A. Alan Fletcher, President and CEO of the Aspen Music School and Festival, said this on June 23, 2013: “Classical music in the United States depends on four groups working together: musicians, donors, administrators, and listeners.” Two months later he said similarly, across the street from Orchestra Hall.
There is at least an implication in his remarks that these four components have essentially equal value.
B. As those of us in the audience now know, the Minnesota Orchestra Management has (and may have always had) a different model:
1) administrators/large donors/Board;
2) musicians;
3) listeners/audience;
with the administrators/large donors superior; and the listeners (it now appears) essentially irrelevant except to purchase tickets.
This model worked so long as there was a benevolent donor class which believed in great music for the greater community played by a top tier Orchestra conducted by a top tier music director.
Wealthy opportunists who like music but like power and control even more apparently saw their opportunity to take over the Orchestra, and have done so, and here we are.
C. And there’s a third model, which Board member Harvey Mackays “Swim with the Sharks” book caused me to revisit this week.
The alternative is in “A Man’s Reach” by Elmer L. Andersen (edited by Lori Sturdevant, University of Minnesota Press, 2000).
Mr. Andersen would be well known to any of the “players” on the current Orchestra Board: orphan who loved books and learning; well to do and very successful business owner, life-long Republican, MN political and civic leader, including Governor and UofM Board of Regents, philanthropist, on and on.
We were friends the last 12 years of his life.
In his book, pages 96-100, Mr. Andersen describes his “corporate philosophy” which “was built around four priorities in a definite order.”
1) “Our highest priority…should be service to the customer.”
2) “Number two was that the company [H. B. Fuller] should exist deliberately for the benefit of the people associated in it. I never like the word employee. It intimated a difference in class within a plant.”
3) [H.B.] “Fuller’s third priority was to make money.”
4) “Our philosophy did not leave out service to the larger community. We put it in fourth place….”
Mr. Andersen died in 2004. It would be interesting to hear Mr. Andersen and Mr. Mackay et al discuss the word “customer” in context with the Minnesota Orchestra.
There is, in my opinion, a severe distinction and disconnect between Mr. Mackay’s “Shark” approach to business and Andersen’s “A Man’s Reach” philosophy, and the distinction is on display at 1111 Nicollet Avenue now.
Mr. Andersen can’t engage in this conversation, at least directly. I wonder what he and many of his other contemporaries – former pillars of this community – would have to say.
Four days. My best to the parties.
The Listeners will determine the future. 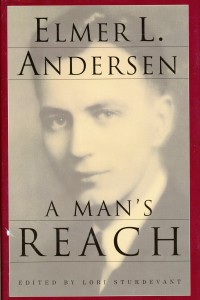