Other posts in this series:
Feb 11, 2013: “Sykes High, oh Sykes High School”
May 4 (the main article): Thoughts on Sykeston High School at its Centennial
May 9 A 1957 Social Studies Test
June 12 Remembering Sykeston in late 1940s
June 28 Snapshots in History of Sykeston
July 3: Remembering Don Koller and the Lone Ranger
*
One week ago today I was at a baseball game featuring 5th graders from Apple Valley and Bloomington, two twin cities suburbs. The game was at Kent Hrbek Field, a ballpark named after the Bloomington native and Minnesota Twins legend which is perhaps two miles from the old Metropolitan Stadium, where, as a kid, Hrbek developed a love for the game that became his profession, including two World Series championships.
What drew me there was grandson Parker, birthday partner of mine, who’s a mighty good ballplayer for his eleven years, and on this particular day was catcher. He lives for baseball.
(click to enlarge) 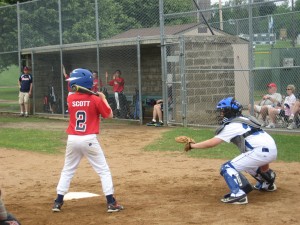 “Back in the day”, in assorted North Dakota tiny towns, before television, and far out of range of any major or minor league sports, I developed an appreciation for sports, so it is easy to watch the assorted games we see from time to time.
A week from today, I’ll be out in Sykeston for the celebration of the Centennial of the High School, and it seems a good time to remember sports, as I knew them, emphasizing Sykeston.
As for Sykeston itself, here are the 1950 and 1958 school yearbooks, each having a few pages about the athletic programs in that tiny school:
1950 – Sykes Hiawatha 50001
1958 – Sykes Hiawatha 58001
There aren’t too many pages to “leaf” through to find the four or five pages in each yearbook which talk about Athletics as reported by the student editors of the time.
For years Sykeston’s main claim to athletic fame (to my recollection) was the 1950 Boys Basketball team (you can read about it in the yearbook) which won 3rd in the North Dakota Class C State Tournament. This was a big deal! I was not yet ten, and though I was at the tournament in Valley City, I can’t say I was that attentive.
More recently, Sykeston native Travis Hafner, became a noteworthy Designated Hitter for the Cleveland Indians. He graduated from Sykeston High School (class of 12 or so); my senior class was about 9…. There was no high school baseball program at Sykeston. Travis did his learning later.
Sykeston did have baseball, though not publicized in the yearbooks.
In those long ago years, Sykeston, like most places, had a town baseball team – men from teenage on up who played neighboring town teams on Sunday afternoons. It was a big social event for the communities.
In Sykeston the ballpark was, and perhaps still is, on the southwest edge of the town. There were no “stands”, and people parked along the base lines, hopefully not to be hit by an errant foul ball.
I don’t recall practices between games – I might be wrong. We came to play, usually just on Sunday. There were some good “country” ball players in those little towns: they could hit and field very well. But it’s a long leap up and out of the country to the minor or major leagues. “Pronk” Hafner was one of the lucky ones.
Personally, I loved sports.
It interests me to observe that I didn’t offer sports memories as most memorable in my young life. I was pretty good, in a sense, but I didn’t score a lot (other than my first game in 8th grade: 34 points, and second game, 32) or the time I made 12 of 14 free throws in a game somewhere. Rarely did I score over 10 points.
But like many small town kids, I participated, and dreamed, and listened to games on the radio.
We really didn’t have much of a choice but to participate, I guess. For a team sport, you needed a team, of boys, and sometimes most all of the boys in the school suited up.
There was girls athletics as well, but these were the days when girls played half-court only. And there were cheerleaders, and townfolk cheering on the local team in every community.
I find only a few photos of me “back in the day”. Here they are, for posterity.
Your own memories? 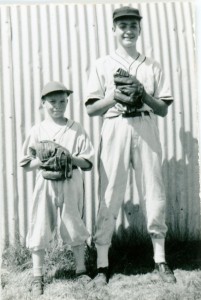 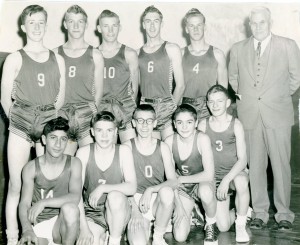 Ross ND marching band in a parade in Williston ND 1954. If a school was lucky, a teacher had some knowledge of music, and there was an opportunity to at least learn the basics of an instrument! 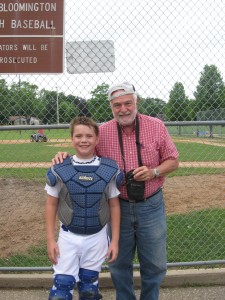