Today was a most interesting day at Basilica, my home for Sunday Mass almost every Sunday.
Inside, it was business as usual. Outside, a short block away in Loring Park was the Gay Pride Festival, and shortly after 9:30 Mass concluded, the Gay Pride Parade would literally pass by the street corner next to the Church. This was an exultant day for the Gay Community, understating the obvious, days after the Supreme Court rulings, and only about a month since Gay Marriage was legislated in Minnesota.
I’m not sure that “Gay” is a proper “one-size-fits-all term in this situation. Nonetheless, I’m happy for the Gay, Lesbian, Bisexual, Transgender (LGBT) community this day. I’m straight. The issue has never bothered me.
The guy at Archdiocesan headquarters – the local Archbishop here – is probably not in a celebratory mood. He has spent years and loads of anonymously donated money to make sure Gays could never marry, including a massive and expensive campaign back in 2010 – a DVD in every Catholics mailbox.
But the LGBT community can celebrate, and (I believe) largely because the Gays have come out of the shadows and made themselves known in families everywhere, there is now no going back. Living anonymously didn’t work. They won’t be anonymous again, thankfully.
(Someone in our family called our attention this morning to this video in the Minneapolis Star Tribune. One of the two in the video is a relative of ours; her Dad is seen momentarily as well. A wonderful man in one of the groups I belong to announced the wedding of he and his partner on Sep 21. “Sorry you can’t expect an invitation – it will be a big wedding”, he said. The nephew of my daily coffee buddy came out a couple of years ago…and on and on.)
As Catholic parishes go, my Church is a welcoming place for the LGBT community. Indeed, one of the intercessions this day was “for respect for all people [including their] sexuality.”
Still there are and will continue to be discomforts. Coming in, today, I met two friends in my age group. There were a couple of “wink and nod” kinds of comments about what was going on in Loring Park and would be, later, on Hennepin Avenue. I didn’t nod. There are ways to send messages without making a scene.
Going out of Church I took a photo towards Hennepin Avenue outside:
(click to enlarge) 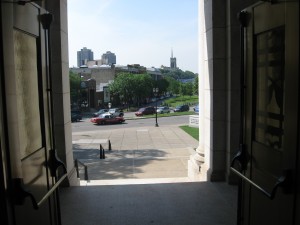 From Basilica of St. Mary towards Hennepin Avenue June 30, 2013

I was thinking back to a day a few years ago when I took another photo from the other side of the street, and wrote a blog about what I was experiencing that particular day, October 3, 2010.
The blog speaks for itself.
Lucinda’s project, along with others efforts, was immensely successful, but the wounds remain to this day.
Leaving the Church I had some free ice cream, and passed on the opportunity to write a postcard to my lawmakers supporting the euphemistically named initiative for “religious freedom”, which is a major campaign of the hierarchy of my Catholic Church, and has no useful effect other than to work towards increasing the power of the Catholic Church in the public square. NOT a good idea.
Back home, I took a photo of a reminder of Lucinda’s project back in 2010. It has remained prominently displayed in our house ever since we purchased it, a constant reminder about one of the ways a supposedly powerful ad campaign can be turned on its head. There are 15 of those DVDs in the sculpture, all of them once featuring the Archbishop of St. Paul-Minneapolis campaigning to prevent what the LGBT community is celebrating this day.
There is a message for advocates in that, and not just advocates for the Gay community…. 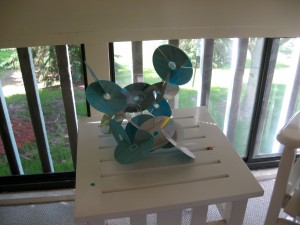 COMMENTS:
Greg, June 30: Very well done. I didn’t have the opportunity to mention why I chose the shirt I was wearing this morning. It was red and white striped. I picked it out because it was the one shirt in my closet that comes closest to reflecting the rainbow. As I explained to others, I was wearing it in Solidarity!
Bonnie, June 30: Thanks, Dick. Again, well said, as usual . . . .
Angela, June 30: I’ve been exercising ‘summer hours’ for my Mass attendance at the Cathedral which means, I attend the Sat evening anticipatory mass. I didn’t attend yesterday because I knew Nienstedt would be the celebrant for the so called ‘Fortnight for Freedom’ mass. So I stayed away. As a matter of fact, I make a point not to attend a mass when I know he will be the celebrant. I did however participate in Eucharistic Adoration and prayer the rosary Saturday afternoon.
Keep up the good work on the blog.
Joyce, relayed from her friend, Dan, June 30: I read about the DVD, and effots to turn them into money for support through art. Great idea. I think I’ve even seen some of the stuff on the DVD on the TV… Gay USA perhaps but I can’t do video, and don’t really need to see it. I think I’ve seen all their talking points by now.
A minor point… he wonders if Gay is a proper substitute for LGBT, and I would say absolutely. But gay works better as a descriptive term than as a noun. Gays, and “the gays”, is less desirable than “gay people” or even ” LGBT people.” (one of the problems with breaking down gay into LGBT, is that then others want to add Q, A, I, P, and some other letters I can’t remember, resulting in something that becomes difficult to say as well as write. This is also on it’s face, divisive, while gay can include everyone who doesn’t identify as strictly heterosexual or straight. But Gays or the gays, almost implies a different species. (It can be cute if used in the proper context, but not so advisable in serious discussions.)
Now don’t get me wrong, I appreciate his support, and realize he isn’t intending to stigmatize or marginalize, but for someone who supports equal treatment for all people, he may find it helpful to stress that those previously marginalized and dehumanized, are in fact human, and people. That’s why “gay people”, black people”, etc, works better than “the blacks” or “the gays”.
But a very good, needed, and welcome article.
Dick, responding to above: There is this matter of ‘dancing around’ this issue, as there is with a White talking about race with an African-American, to this day. You don’t know what to say, and consequently the tendency is to say nothing, and the risk is to say something that might be interpreted wrongly. I encountered this ‘tip-toeing’ as recently as last evening.
This also happened in the 1960s and 1970s during the times of aggressive advocacy for women’s rights. For a male, even one who cared, it was a bit like walking through a minefield, particularly if you didn’t know the woman well.
It is as it is.
My college roommate for three years is Gay and in a long-term relationship – I think. He has never told me directly that he is gay, and I have not pushed the issue. Of course, he would have been gay then, too and I didn’t know it, and there was not the tiniest bit of the issue and we were active in the same college groups. But the stigma of the label hangs on, now, for over 50 years.
So, I do the little bit that i can.
I appreciate the last sentence.
https://thoughtstowardsabetterworld.org/wp-content/uploads/2022/04/thoughts-300x138-1.jpg 0 0 dickbernard https://thoughtstowardsabetterworld.org/wp-content/uploads/2022/04/thoughts-300x138-1.jpg dickbernard2013-06-30 15:46:152013-06-30 15:46:15#742 – Dick Bernard: Gay Pride outside the Basilica of St. Mary
0 replies