UPDATE on June 25 gathering: see end of this post
Also, see Comment below Masqueray grave photo
Bulletin from Dr. Virgil Benoit:
This afternoon (Monday, June 24), in northeast Minneapolis, there will be a celebration in honor of heritage beginning at 4:30 PM at Pierre Bottineau Park located at: 2000 2nd St. NE Minneapolis (Here’s Map link.
4:30–4:45 Gathering
4:45-5:00 Welcome by President of the French American Heritage Foundation (FAHF), Mark Labine
5:00–5:15 Story by Noel Labine
5:15—5:30 A sense of heritage from Rev. Jules Omalanga; and
Jerry Amiot, AFRAN (Association des Français du Nord) : An invitation to know AFRAN
5:30–6:00 Supper (Soupe aux pois, tourtière, plus items to be added) Free
Some activities and visiting will continue until 7PM.
Everyone is welcome to this first in recent times of a commemoration of the Saint-Jean-Baptiste.
Sponsored by Initiatives in French Midwest (IFMidwest), Virgil Benoit, Director in collaboration with The American-French Heritage Foundation
While not in the invitation, I believe that “pot luck” items are welcome.
*
Today, June 24, is the feast St-Jean Baptiste, has long been a festive holiday in Quebec, and in various ways in other French-Canadian “nests”. It came with the original French settlers to Canada in the 1600s. It was part of the French Catholic tradition.
I’ve been in Quebec City for two celebrations of St-Jean Baptiste Day, in 1982 and again in 1987. They were quite the occasions. 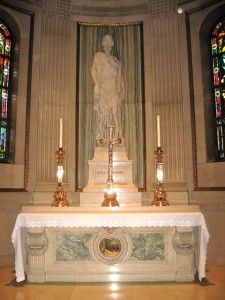 How the altar at the Cathedral of St. Paul is described.

If you’re of the Christian persuasion, even in your past, you know a bit about St. John the Baptist. At Mass this morning at Basilica of St. Mary, Fr. Greg Miller, from St. John’s University in Collegeville noted that St. John the Baptist is patron of St. Johns Abbey, which is of German origin, so French-Canadians do not have sole claim to the Saint. (Full disclosure: I’m North Dakotan, half German (ancestry directly from Germany), half French-Canadian from Quebec, proud of both lineages!)
There is no statue of this most prominent Saint at Basilica of St. Mary*, but I knew there was one at the Cathedral of St. Paul* so went there and took the photo which is above. It is one of six side altars beside and behind the sanctuary of the Cathedral, dedicated as follows:
St. Anthony – Italians
St. John the Baptist – French and Canadian
St. Patrick – Irish
St. Boniface – German
Sts. Cyril and Methodius – Slavic
St. Therese, the Little Flower – Missionaries.
These reflect large ethnic (and often heavily Catholic) groups which migrated to and settled in the Diocese of St. Paul, prior to the time the Cathedral was constructed (early 1900s).
Enroute out of the Cathedral, I picked up the Sunday bulletin and noted on page seven this article about Saint John the Baptist and the French and French-Canadians:
St John the Baptist001
All the clerics mentioned in the article, Bishops Loras and Cretin and Priests Ravoux and Galtier were French. I noticed the phrase “even the flawed Galtier”, and as is my curious self, I wanted to know a little more. Probably the answer is in this article about Galtier in Wikipedia. (See the paragraph beginning “In 1840”)
Through their past, and in the present, the French and French-Canadians are intertwined, through ancestry, Church, and in other ways.
Huge numbers of Minnesotans are at least partially French in ancestry, most of these are French-Canadians whose ancestors came to what is now Quebec between about 1630 and 1760. In the 1980 census, the last to ask questions about ethnicity, 8% of Minnesotans stated they had French descent (France or Canada).
Relationships are complex. In a sense, the French and French-Canadians, both of the same culture and heritage, are quite similar to the native Germans and what we call German-Russians in North Dakota. In both instances, the ancestral lines were long separated for different reasons, but most aspects of the culture and heritage carried down to even the present day.
This is not a simple topic.
If you can, come over to northeast Minneapolis this afternoon for continuation of a many centuries long tradition.
*NOTE: Both the Cathedral and the Basilica of St. Mary were creations of the French architect Emanuel Masqueray. The legendary Archbishop John Ireland, Irish, who grew up in infant St. Paul, was a product of the preparatory seminary at Meximieux, France, and a lifelong “fan” of France, engaged Masqueray to build the twin cities edifices, and a number of other Churches in the Archdiocese. Not long ago we viewed his gravestone in St. Paul’s Calvary Cemetery. 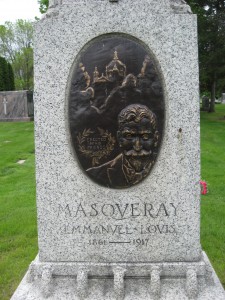 Comment
June 24 from J.P., French-Canadian who grew up and now lives in Manitoba: The following are just my personal thoughts and what I can remember of St. Jean Baptiste day in my life time.
Growing up in Southern Manitoba, St. Jean Baptiste was just another day (we were told at school that he was the French Canadian Patron Saint). It was no big deal for us in Manitoba but again we were told that it was in Quebec.
Having lived in Quebec from 1970 thru 1982, in my humble estimation all that day represented was the day the separatist folks took to the streets & parks and really promoted their intentions of over throwing the federalist government and have their own country, while the rest of us federalists bit the bullet and tried to enjoy the day off the best we could. (Not a very great memory)
Now that we are back in Manitoba I have found that there are a few small French Canadian hamlets in the Province that will celebrate that day as it was meant originally 100 years ago, strictly as a French CANADIAN Patron Saint. They may have a small parade followed by some kind of picnic , but not a real big deal.
Remember, that this is strictly my opinion in answer to you query.
UPDATE, after the gathering:
We were a small group of about two dozen. That was expected.
A good time was had by all in attendance.
This was a usual “pot luck” – too much excellent food, excellent variety, people brought whatever they wished (God must have a special “pot luck” division to handle affairs where people bring something to share!)
Noel Labine told a great story about St. Paulite and budding railroad magnate James J. Hill‘s involvement in the Metis revolution in Manitoba parts. Of course, JJHill was a Canadian by birth and upbringing, and would have sympathies for and loyalties to the country of his birth. Noel referenced Albro Martin’s biography of Hill as an excellent resource.
Catholic Priest Father Jules Omalanga, native of Kinshasha Congo, whose first language is French, and who’s a founding member of the Board of the French-American Heritage Foundation, gave a great talk about cultural aspects of a Francophone African (or other nationality or language) coming to and assimilating into the United States. Each week at northeast Minneapolis’ St. Boniface Catholic Church, the noon Mass on Sunday is in French for a primarily francophone Africans living in America. I have been to the Mass, and while not a francophone, it is always very spiritual and uplifting.
We learned a great deal in the two presentations.
This resurrection of St. J-B Day was initiated by Initiatives in French Midwest, and collaborating groups were the now 31 year old AFRAN (Association des Francais du Nord) at Red Lake Falls MN (no website), and the newly Twin Cities based French-American Heritage Foundation whose temporary web location can be found here.
Here are a few photos from June 24 (click on photo to enlarge): 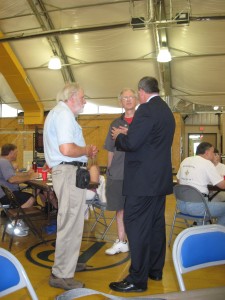 Dr. Virgil Benoit of IF Midwest and AFRAN, and Mark Labine, President of French-American Heritage Foundation, chat with Michael Rainville, Minneapolis, at the Fete. 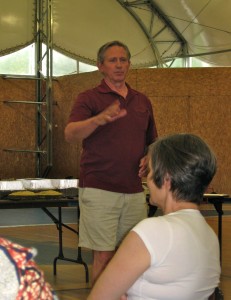 Noel Labine tells a story about James J. Hill and the Metis uprising 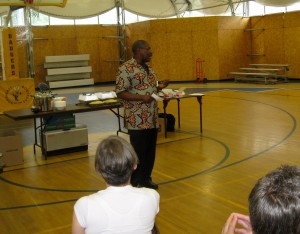 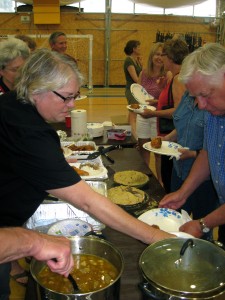 “Pot-Luck”. There was far more than enough!