Ours is an extraordinarily complex society which, perhaps defensively, too often retreats into shorter-than-shorthand descriptors to describe ourselves and others.
So, one says “Canada” and it means something, as does “Mexico”, or “NAFTA”, or on and on and on. Snap judgments often based on little information cause all of us serious problems.
Thus, it was a privilege to view for a moment, yesterday afternoon, positive relationships between neighbor countries on a Cedar Lake shore lawn, hosted by the Minneapolis Consul-General of Canada and his spouse, Jamshed and Pheroza Merchant. The occasion was an early celebration of Canada Day, and the specific purpose, per the invitation, “for a special tribute to Canada-U.S.-Mexico cooperation, from twenty years of NAFTA to the Trans-Pacific Partnership.”
Like any negotiation, these agreements are imperfect, but better than no agreement at all. They provide some “rules for the road” to trade relationships, and they are constantly being reviewed and, likely, re-negotiated.
(click to enlarge photos) 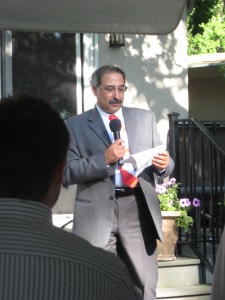 Perhaps I was invited to attend because I am “French-Canadian” representing a fledgling organization “French-America Heritage Foundation (F-AHF)“. The words hardly begin to define the complexity – there are hundreds of thousands of Minnesotans who share in one way or another French-Canadian roots, and many more whose roots are directly from France, or have as native tongue the French language, or interest in same. I am only one.
Then you expand this to the word “French” and it becomes far more complex still. My friend and fellow F-AHF Board member Francine Roche, Quebecoise, also at the gathering, could discuss this complexity at a much deeper level than I.
Suffice to say that on that lawn we heard representatives of Canada, Minnesota (the U.S.) and Mexico speak of the trade relationship between their three countries which this year involves over $1 trillion dollars in economic activity this way and that. I saw this relationship this afternoon in the local Toyota dealer while having my car repaired. The new car stickers invariably cited where the car components were made and assembled, mostly U.S. and Canada (“U.S./Canada”) and Japan….
We might pretend we are omnipotent: “the United States”. As one of the speakers described us, for them it is like “sleeping next to the giant”, but the relationships are far more complex than that, going back many years, transcending that hideous wall of separation along the Mexican border that supposedly is needed to resolve the illegal immigration question in our congress; or the much more benign symbol of international friendship, the Peace Garden between North Dakota and Manitoba, which goes back to the 1930s.
Several handouts at the gathering help define the terms, especially U.S. and Canada, and I’ve attempted to reduce them to readable pdf’s, as follows:
1. Canada-U.S. Partnership Map:Canada-U.S.001
2. Celebrating the Canada-Minnesota Partnership: Canada-U.S. Brochure001
3. Minnesota-Canada-U.S. Brochure: Canada-Minnesota001
4. NAFTA Works, from the Trade and NAFTA office, Mexico’s Ministry of the Economy: Mexico-U.S.-Canada002
In addition to Mr. Merchant, great weather, fine wine and magnificent food, those of us in attendance heard interesting remarks from representatives of the respective countries.
Minnesota Lieutenant Governor Yvonne Prettner Solon spoke of the close relationship we share with our neighbors to north and south; as did Alberto Fierro Garza, brand new Consul of Mexico in St. Paul; and Mr. Lyle Stewart, Saskatchewan Minister of Agriculture.
Boundaries may divide us, but in so many ways, we are all part of North America, and indeed, of the entire planet. And I felt honored to be part of the gathering to see this demonstrated.
In our nation and world the political issue will continue, but we are lucky to have people in all countries who can see beyond differences and the short-term, and view the greater good of all.
Here are a few photos from yesterday: 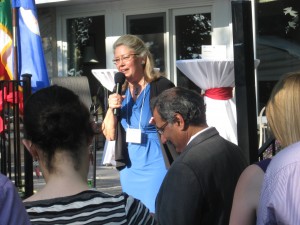 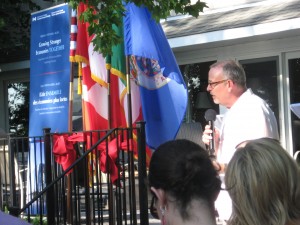 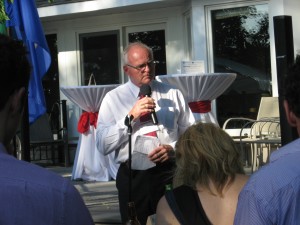 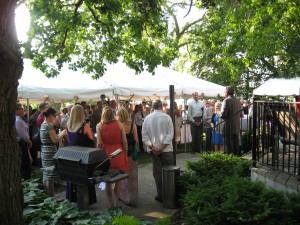 Listening to speakers at the Canada Consul-Generals lawn party June 26, 2013 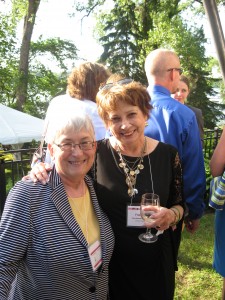