UPDATE MAY 23, 2013: In the third paragraph, below, is a 100 question test I took in 1957. Scroll down to the UPDATE continuation following the original post, and you will find the Answer Key which I prepared, to the best of my limited ability. If interested, first take the test, then compare your answers with mine in the key. Challenges are solicited.
This is part of a series of posts about Sykeston North Dakota.
Feb 11, 2013: “Sykes High, oh Sykes High School”
May 4 (the main article): Thoughts on Sykeston High School at its Centennial
June 12 Remembering Sykeston in late 1940s
June 28 Snapshots in History of Sykeston
June 29 Sports in 1950s small towns in North Dakota
July 3: Remembering Don Koller and the Lone Ranger
*
A few days ago I did a long post about Sykeston High School, a tiny place near the center of North Dakota from which I graduated in 1958.
Curt Ghylin, now a Minnesotan but back in the early 1960s a student at the same college as I, Valley City State Teachers College, visited the blog, and noticed a state-wide test given to high school Juniors and Seniors that I had taken in November, 1957, on North Dakota History, Government and Citizenship.
For those interested, the 100 question test is here: ND Hist Govt Ctzn 1957001.
Curt asked a perfectly reasonable question: “I want to show our kids the test on North Dakota history that your referenced. Do you know if the key is available somewhere? I don’t know all the answers.”
Well, I was a kid taking the test in 1957, and I did well on it, but it was statewide, probably scored by the University of North Dakota (UND), 150 miles or so from where I was marking my sheet….
No, I don’t have an answer key, Curt.
And relooking at the test, yesterday, I wouldn’t give even odds that I’d get 50% right today, without lots of cheating!
But Curt’s was a perfectly reasonable question, and I knew I had placed second (or such) in the state that year, and there must be something…. In my bookshelf was a book I had been given at the state “Know Your State” contest at UND in December, 1957. It was an autographed copy of “North Dakota A Human and Economic Geography” by Melvin E. Kazeck of the Department of Geography of the University of North Dakota, published 1956 by the North Dakota Institute for Regional Studies at North Dakota Agricultural College (now NDSU) in Fargo.
Mostly, all of the answers will be somewhere in that 264 page book. Best I know I’m the only person in the world who has a copy (I google’d it), so if it’s going to get done, I’m going to have to be the one to do it.
And I will, Curt. Yes I will. Take the test yourself, and check back to this space by early June, 2013 for the “key” (which should be pretty close to accurate).
In his e-mail, Curt articulated a problem with such old documents: “I had to point out to my sister-in-law as she read the test that the date of the test was 1957 when she questioned why Interstate 94 wasn’t a possible answer for question 2—‘The highway running across ND from Fargo to Beach’ “
Here, from Kazeck’s book, is a map with the answer to THAT question, from page 181! (The first stretch of ND Interstate wasn’t constructed until 1958, between Valley City and Jamestown, and that was among the first stretches of Interstate Highway in the U.S.)
(click to enlarge) 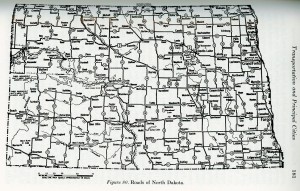