I have been watching the news, and very often the tragedy of Syria is front and center. I know a few Syrians, and I know they are in pain, and I know of the horrors of civil war, though I’ve never been through one.
It has occurred to me that Syria has been too abstract for me. The images roll by, and roll off….
Tonight I dusted off my National Geographic Atlas of the World (7th Edition, 1999) to get a better sense, once again, of the country and the region of which it is a part.
(click to enlarge) 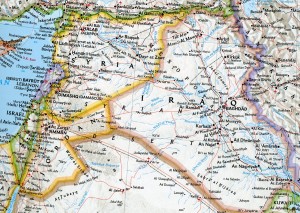 The scale of the map, it is said, is 110.5 miles to the inch. To find approximately 110 miles on this map, find the “S” in the word Syria, and roughly between the “R” and “I” would be 110.5 miles.
The CIA Factbook shows Syria to be about the same size as North Dakota, with a 2013 population of 22 1/2 million (North Dakota population about 700,000). Last I recall, I seem to remember 80,000 as the number of deaths so far in this war.
The news tonight emphasized the pressure neighboring Jordan is experiencing from refugees from Syria. Other times we’ve seen other things.
The analyses of what is happening and what has been, or should be, done are endless.
The tragedy of the Syrian people becomes simply visuals we can watch on television.
That I know at least one person who is Syrian, but hasn’t lived there for years, who has relatives and friends who have been victims of the war in Syria, helps with understanding. But should that be a necessary pre-requisite for being engaged as a citizen? I think not.
I remember watching the Vietnam War similarly in the 1960s. The technology was a bit more primitive then, but otherwise basically the same as now. Iraq, too, engaged me. We were militarily involved there.
With Syria, it is simpler to be less engaged. It seems more abstract.
War is evil, always, but complicated.
Some years ago I remember a radio program I happened across where an evangelical preacher, an American of African descent, had an epiphany while watching the refugees, particularly the children, flee Rwanda in 1994. His large congregation liked his hellfire-and-damnation sermons; when he came to the pulpit and described hell as being on earth for those refugees in Rwanda, his flock began to evaporate.
I often wonder about him.
As I wonder about us, comfortably distant from the horror and the tragedy of war, anywhere.
So, this small post is simply an invitation to learn the geography of one tragic locale in this world, and a small invitation to get personally engaged in something bigger than yourself.
Perhaps that’s the best we can do.