I first published at this space on March 25, 2009, four years and now-708 posts ago.
If you do the math, that’s about one post every two days – far more than I ever anticipated.
Lately, there’s been a lull in the action: 7 posts in the last 30 days; one for every four. The hiatus began with 12 days in Florida, and I haven’t quite got back in gear.
It’s not for lack of topics. In fact, the problem is that there are too many topics from which to choose. If you stop by this space once in awhile, you’ve noted I’m an eclectic sort, writing about whatever, whenever something crosses my path in which I am interested. And there are a lot of things that interest me.
I had in mind – and still do – a stand-alone post about my friend Dr. Michael Knox, a retired professor whose dream and passion is a United State Peace Memorial. I’m on his rolls as a founding member, as is my wife, Cathy. It’s $100 bucks well spent, in my opinion. “Why not you?” I ask. Or someone you know. His project is just getting a good start. Why not be a pioneer?
Michael traveled a lot in his day job, and on a trip to Washington DC noted that there are infinite monuments to War, but one is hard-pressed to find anything that relates to Peace. He’s working to change that. Getting the word out about what he is doing is the most important task. 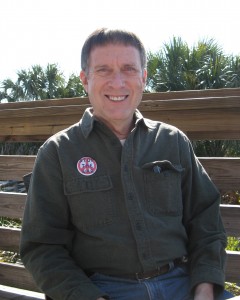 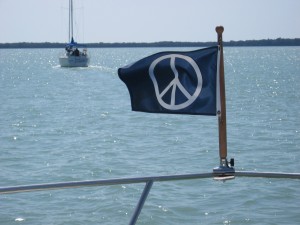 My Florida trip included plenty of conscious opportunities to see ordinary people at work. I made a deliberate decision to go across Central Florida from Sarasota to Ft. Pierce, totally off freeway. It’s a very different Florida than the tourist brochures…. And I also decided to just watch people as they live, a grocery store clerk, etc. In our too-frantic world, we often misse the obvious.
The world – even Florida – is full of common folks just doing their best to get by. They aren’t in the news, but the country wouldn’t survive without them.
The main reason for extending the Florida trip was to attend a conference of retired teachers in Orlando, and I ended up being a presentor for a couple of sessions there. I would guess these folks averaged 35-40 years of public school teaching. I’m quite certain their main interest – apparent from attendance at the breakouts – was protecting their pensions, now vigorously under attack. They tried to plan well under the rules, then somebody decided the rules had to change. That’s the dilemma of being a, dare I say, “Public Servant”. 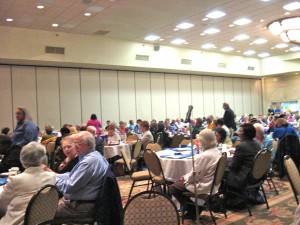 Retired teachers at a conference in Orlando FL March 23, 2013

Next door to them, in a much larger venue, was a current guru of “think and grow rich”, a very attractive woman who rose from homelessness to wealth, and probably gains most of her wealth from people who pay money to hear her spin tales to, as a common t-shirt said, there, “Decide Freedom”. It’s a dog-eat-dog world, go for it. She had a large attendance, no doubt. They paid good money to attend her weekend series. Sunday (below photo) seemed to emphasize young people; the previous night, older folks…. She doesn’t need my additional publicity.

There was a certain amount of dissonance, I felt, between the two conferences, next door to each other in the same hotel. Reality versus Dreams.
Maybe it was just me.
Oh, so many topics. (And there are several more in line, maybe, as time goes on.) About the time of the new Pope’s election, and the never-ending dysfunction of American politics, I heard the Canadian Consul-General speak, very diplomatically, of course, comparing the U.S. and Canada people and systems. I was there less than an hour, but what a substance filled hour it was.
Stay tuned.
Maybe the real reason for the lack of activity, though, are things happening here at home. I think I have the Commissioners of a very large county in my area nervous. I discovered something they considered routine back in December, which has taken on a life of its own. I think they have reason to be at least a little bit nervous. You can read about it here. The up-to-date news on this issue begins “below the fold” – a ways down on the page.
And in a couple of weeks I’m sponsoring a little deal on the occasion of Law Day, Wednesday, May 1. The guest speaker, arranged just yesterday, is a 93 year old gentleman who’s former President of America’s largest Association of Lawyers, the American Bar Association.
That will take a little of my time…. But learning from elders, as Mr. Brink is, is very important.
Come on over, if you’re in the Twin Cities. Access to information is at the aforementioned March 27, blog.
https://thoughtstowardsabetterworld.org/wp-content/uploads/2022/04/thoughts-300x138-1.jpg 0 0 dickbernard https://thoughtstowardsabetterworld.org/wp-content/uploads/2022/04/thoughts-300x138-1.jpg dickbernard2013-04-14 20:58:272013-04-14 20:58:27#708 – Dick Bernard: Reflecting as I Relaunch
0 replies