UPDATES at end of post.
For other posts on the issue, simply place the word “guns” in the search box.
There have also been many comments to the same post at Woodbury Patch here
This mornings Minneapolis Star Tribune had a very powerful full page pictorial editorial on the Gun Issue. Here’s the article, and below is a photo of the actual full page spread.
(click to enlarge) 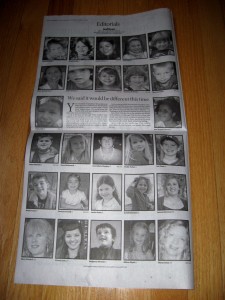 Tonight, CBS 60 Minutes had two segments featuring the Newtown parents, whose children were killed in the massacre on December 14. The segments are accessible here, and are well worth watching.
We are urging our lawmakers to do the serious and courageous work of tightening control of firearms in this country. If people wish to own guns, then they need to accept more responsibility, especially if they wish to own weapons that can only be described as war combat weapons.
Most all the talk I hear from the “Gun” side is “Rights”. It is within the role of our legislators to talk very seriously about “Responsibility” of gun owners as well. Our society has many laws which in one way or another mandate responsibility. Guns are a major area shamefully under-regulated (in our opinion). Too many in the gun-owner population do not well regulate (take responsbility) for themselves. Responsibility does not mean more guns in more places. (Even the most cursory reading of the 2nd amendment notes the words “well regulate” in the very first sentence.) We should not accept a new “wild west” mentality in the 21st century.
If you’re Minnesotan, here’s a current list of lawmaker contact information: Minnesota Lawmakers 2013
UPDATES/COMMENTS:
from Phyllis: April 9: I work at a golf course during the summer months…..Every spring all of us employees are required to go through a criminal background check along with a credit check. And, this is only for a part time summer job at a golf course!!! I have no problem with either of these background checks, but we have people who are so against having criminal background checks before purchasing a gun which would save lives! My “liberty” is that I want to feel safe…..
from Paul: April 9: I find the arguments NRA and others almost laughable – except for the incredible tragedy of excessive gun violence in this country. Notice, I said “this country” because in this we are truly unique in the world. “WE ARE NUMBER ONE! YAY!”
But I suppose they do have a point there when it comes to the slippery slope. After all, those of us who are old enough remember when it was possible to buy and own a personal automobile. Of course, that was before laws like speed limits, seat belt requirements and drivers licenses were enacted prior to the confiscation and outlawing of all personal car ownership. Ah, I remember those early days. I loved my cars. And how stupid those laws were. When cars laws were passed, there were still speeders and drivers without licenses who did not wear their seat belts.
And, of course the same thing has happened since the first gun control laws outlawing personal ownership of submachine guns, bazookas, rocket launchers, grenades, atomic bombs, etc.. We have had so many guns confiscated since that. Now almost no one has one.
Oops, what am I saying? That didn’t happen at all, did it. Duh!
From Judy: I posted your gun comments on my FB page. (I’m on a mission).
From Jeff: The conspiracy of a solid majority of know nothings in the USA, combined with the power of profit (gun/ammunition companies and their lobby the NRA and the right wing media) , and
The long and steadfast tradition of American exceptionalism continue to fight the overwhelming popular support for common sense gun responsibility laws.
Over the weekend, and I am not sure where, I read that the USA is basically one of 3 countries in the world with a right to gun ownership like that in the 2nd Amendment, there are
A handful of other Latin America countries with some sort of similar right in their constitution… if anyone else read the same article or post maybe they can cite it? I am not sure where
I read it.
From Tom, April 9: Dick-When I had a student drop the “I’ve got rights” argument on me, I would hand him/her a dictionary and ask him to find the word “rights” and keep his finger in that page. Then I would ask him/her to find the word “responsibility”. Then I would ask “which comes first”?”
https://thoughtstowardsabetterworld.org/wp-content/uploads/2022/04/thoughts-300x138-1.jpg 0 0 dickbernard https://thoughtstowardsabetterworld.org/wp-content/uploads/2022/04/thoughts-300x138-1.jpg dickbernard2013-04-07 20:28:172013-04-07 20:28:17#707 – Dick Bernard: The Gun Issue. It's time….
0 replies