I suppose the space age began for me sometime in late October or November, 1957.
We were visiting my grandparents at their farm in south central North Dakota, and the Fargo Forum had published the expected track of the Russian satellite Sputnik, which had been launched October 4, 1957, igniting the space race and intensifying the Cold War of those good old days.
Right on schedule, and on the exact predicted course, Sputnik appeared to all of us gathered on the lawn of the farm house under the dark star-laden country sky – at least you could tell it from the stars as it “blinked” on and off as it tumbled across the heavens, reflecting the sun earthward.
The rest is, as they say, history.
And what started as Cape Canaveral and became Cape Kennedy, and then again became Cape Canaveral on which stood Kennedy Space Center, became famous for generations of ever bigger and more impressive rockets, triumphs and disasters.
I’d visited there with my then-13 year old son, Tom, in June, 1977.
And on March 13, 2013, I went back with 13 year old Grandson Ryan, and his friend Caleb, to once again do the tour of Kennedy Space Center. Here is a Facebook Snapshot Gallery taken on the day of our visit.
While there, I learned that there was to be a launch on April 19. I had never seen a launch, and as it evolved, I was visiting a relative perhaps 30 miles down the coast, and excused myself to go north for the launch of an Air Force Atlas, watching it from the Indian River-side property of my friends the Brady’s. They’ve watched launches from their property since the early 1980s.
March 20, 2013, was my first.
I would like to say the launch was an amazingly impressive sight – the launch I saw – but it was not very dramatic. We saw liftoff at 5:20 p.m., and my snapshot is essentially the view that those without binoculars had from the Brady’s.
You had to be attentive for the telltale speck of light off on the horizon. My host knew about where it would launch, which helped.
(click to enlarge – look for the orange dot near the horizon!) 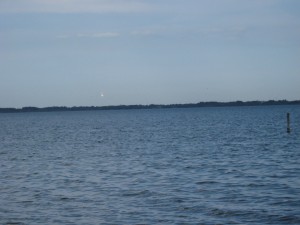 We watched liftoff till the evidence of the vehicle disappeared, which seemed to be more or less the time that the first sound waves reached us, a minute later. This meant we were about 12 miles from the launch pad. 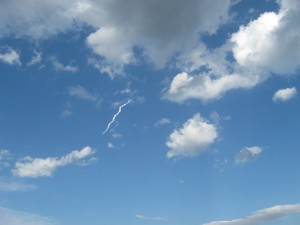 The last photo before the launch vehicle disappeared from sight.

The more astute observers got a closer view, as reflected in the below photo on the front page of Florida Today Newspaper on March 20. You can see the video behind the photo on the Florida Today website, here.
There can be endless debate about the space program, and the purpose of this particular launch; whether it was a waste a money, or a vehicle for good…or for evil….
For me, it was rather exciting to actually see this one launch, probably the only launch I will ever actually see in person in my lifetime. 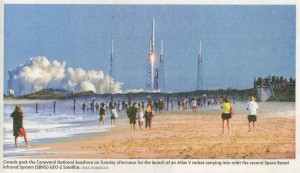