Full disclosure: When Barack Obama was awarded the 2009 Nobel Peace Prize I was pleased and not at all surprised. From the moment he took office, the tone of U.S. relations with the rest of the world began to change, and changed rapidly. I was a new blogger when he spoke in Egypt in June, 2009, and as blogs are something of a permanent record, here is what I said at the time he spoke in Egypt. Here, is my opinion when it was announced President Obama had received the Nobel Peace Prize in November, 2009.
I believe most of us who supported Mr. Obama’s election share my pleasure at his selection. But not all were happy, and they protest aggressively.
The issue was formally addressed at the 2012 Nobel Peace Prize Forum at Augsburg College.
*
On February 14, Valentine’s Day, I was one of those invited to a preview of the upcoming Nobel Peace Prize Forum. We were all given a 12-page single spaced copy of the agenda and workshops for the Forum. It was an extraordinary schedule, chock full of descriptors of the plenaries and workshops (there were 90 in all; I attended 16, the maximum possible).
At the time, I didn’t notice the session scheduled for 12:30 – 1:45 p.m. on the final day. “Controversial Nobel Peace Prizes: Successes or Failures?” with Dr. Geir Lundestad, for 22 years Director of the Nobel Institute in Oslo, the agency charged with the responsibility of selecting the Nobel Peace Prize Laureate each year.
Had I noticed the agenda item, it wouldn’t have surprised. In the history of the Nobel Peace Prize, there have been numerous controversial awards. In fact, in March, 2011, Dr. Lundestad, at Augsburg, had given a 5-minute talk to several hundred students and adults about the controversy swirling around the 2009 Award to President Barack Obama, then in his first year in office. Dr. Lundestad’s explanation, then, is here.
I viewed that talk in person.
On February 25, a week before this years Forum, I started receiving copies of a “petition” requesting an investigation of supposed “Betrayal of the Nobel Peace Prize”.
I received from three people an identical document, all coming from people who would probably self-identify as progressive left, all criticizing the Obama selection. I knew there was criticism but was surprised it came up almost on the eve of the Forum. I was wondering whether/if some protest would develop (to my knowledge, none did.)
As I typically do with my own mailing list, I sent the item on, even though I disagreed with its premise. People have rights to their own opinions.
But the agenda item, which I had paid no attention to at first, now became more interesting, and when faced with an array of choices for the post-lunch workshop, it was an easy decision to join well over 100 people in the College chapel to hear Dr. Lundestad explain Nobel, Nobel’s Will, and the history of the Nobel Peace Prize, especially a number of controversial awards, the final one, the President Obama controversy.
When it came to President Obama, Dr. Lundestad essentially repeated the position stated at the 2011 event at Augsburg (film linked above).
The Nobel Committee, appointed by the Norwegian Parliament as an independent entity, is mostly women, he said, and is accustomed to controversy from any or all, and is willing to stand on principle. There are very large numbers of nominees (all kept confidential, including the selection process, for a period of 50 years), and the debates inside the committee can be vigorous.
That didn’t appear to have been the case with the selection of President Obama. Far more than anyone else, he met the criteria.
Of course the Committees choice doesn’t satisfy the critics, who feel Obama should give up the prize.
The talk, with ensuing questions and answers, went on for the full hour and 15 minutes. Dr. Lundestad, a historian, dealt with most every type of concern that has been raised over the years.
It appeared that within the audience in the hall, the overwhelming majority saw no problem with how the Nobel Committee operates, but were interested in the conversation.
A great deal of information about the Nobel Peace Prize is accessible here.
Take a look.
(click on photos to enlarge them) 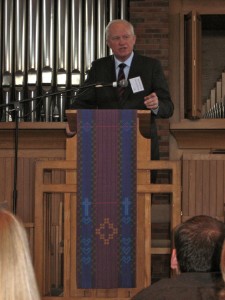 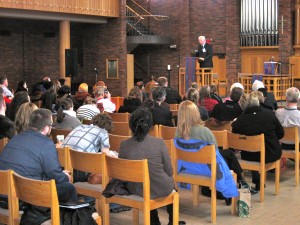