My family letter for this Thanksgiving included this photo, and the content which follows. This began with a very recent correspondence with my relative JoAnn, who I’ve never met in person, and who had sent me the photo with a request to help identify the date it was taken. (click on photo to enlarge) 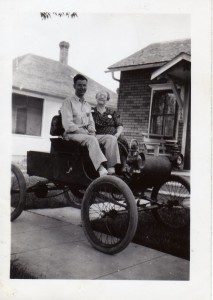 “As informal keeper of the family history of Mom and Dad’s ‘sides’ of the family, I am always open to new surprises, of which the above photo is the most recent.
The photo is of my Grandma Bernard and her older sister Elize’s son Willard (Sonny) Wentz (born 1915), sitting in the Bernard’s 1901 Oldsmobile at 738 Cooper Avenue, Grafton ND, sometime in the 1940s. [The 1901 survived because they kept it indoors, in storage, for most of its life. Its appearances were very rare – once in awhile it was an attraction in the local July 4th parade.]
[My relative] JoAnn is Willard [Wentz] and Dorothy Ann (Altendorf’s) daughter. They married in 1942 in Grafton.
As with ALL family stories, there are mysteries here. The most specific one is when the photo was taken. JoAnn notes her Dad is very thin in this photo, and about a year after his marriage he had almost died from a ruptured ulcer. That would have been in 1943.
My grandfather lost his leg due to diabetes about 1946, and (probably) somewhere around that time they added the bench to the porch. Initially (from other photos), the bench was beside the tiny house. The only dated photo I have which includes the porch seems to have been from Easter, 1947. Henry and Josephine probably bought the tiny house in the very early 1940s, and the early pictures do not show a porch. The bench in the photo appears to be fairly new.
During that time – the 1940s – the 1901 car was stored in the little garage behind the house; later it was stowed in the City Hall downtown. (The 1901 still lives on with Tony Bowker in Ramona CA, inland from San Diego.) Here’s the cars story.
“Family”, with all its ins and outs and ups and downs and narrowness and broadness, has always been “Thanksgiving”.
Hopefully you have a great day today, AND RESOLVE TO LABEL YOUR PHOTOGRAPHS!!!! : – )
HELP on more identification of this photo is solicited.”
Of course, there is always more to any story.

Willard’s parents (William deceased February 11, 1919, and Elize June 4, 1920), and two of his father’s siblings, died of tuberculosis when he was young. After his mother’s death, along with his older sister, Clarice, he spent several years in the Catholic Orphanage in Fargo. When Clarice reached 18, she stayed in Fargo. Sonny, then 13, came back to Grafton to live with his eldest sister and her husband.
Willard’s daughter, JoAnn Beale, in an accompanying note as we discussed the history of the photo said: “They [doctors] were so worried that he [Willard, then about four years old] would come down with TB, that he was made to sleep in the backyard, summer and winter, in a big sleeping bag. Jo [Josephine, his older sister] didn’t like that much, but Doctor’s word was law….”
I wrote back to JoAnn: “Dad once in awhile would tell the story of his relatives with TB (he was born Dec 1907) and he was old enough to know the fears, etc., that went along with this disease. He was a teacher, and every year had to take the Mantoux test, and always tested positive, so he must’ve been exposed to TB, but it never actually made him sick.”
So, this Thanksgiving, my personal reminder to myself is to take nothing for granted. We are all, every one of us, in one big family.
Happy Thanksgiving.
https://thoughtstowardsabetterworld.org/wp-content/uploads/2022/04/thoughts-300x138-1.jpg 0 0 dickbernard https://thoughtstowardsabetterworld.org/wp-content/uploads/2022/04/thoughts-300x138-1.jpg dickbernard2011-11-24 11:32:212011-11-24 11:32:21#481 – Dick Bernard: Thanksgiving 2011: An old car and family ties