Less than 24 hours after I’d heard soon-to-be Senator Al Franken speak at the State Capitol, the home town St. Paul Pioneer Press carried a short article headlined “Poll: Franken’s national numbers are negative“.
Reading further in the six paragraphs, the numbers gleaned from the national survey (Rasmussen) showed 44% of those surveyed had an unfavorable view of Franken, 34% had a favorable view, and 22% didn’t have a view of him at all.
The article didn’t say how many were polled, but typically less than a thousand are asked to respond to such questions.  If that number is somewhat correct, 20 Minnesotans (out of 5,000,000) were asked to comment; how those 20 felt wasn’t part of the report: too tiny a sample.
The article was a waste of perfectly good newsprint.  Or maybe it served a more useful purpose: to drag down the public opinion of the new Senator before he even takes his assigned seat in the U.S. Senate.   As of a few minutes ago, he’s not even listed as a Senator by the U.S. Senate – I checked.
Negative politics is nothing new in this country.  I well remember touring the exhibits in the basement of Ford’s Theatre (where Lincoln was assassinated), and seeing an 1860 political poster for Lincoln with the caption “political campaigns of the mid-19th century featured parades and pagaentry and vicious attacks on the opposition.  Campaigns offered people a major form of entertainment.”
Tomorrow’s July 4th events will represent what passed for political theatre back then.
Of course,  there was no radio or TV in 1860, and political decision making was still made by the privileged few, basically white, male, literate, property owners.  In the 1860 election, only a few million out of the total national population of over 30 million were even eligible to vote.  Women, slaves and similar officially lesser persons were denied the franchise, and it was not until 1920 that women even secured the right to vote.
The Nov. 2008 Smithsonian magazine had a most interesting article about the election of 1860, when Abe Lincoln won his first term as U.S. President at age 51.

Among many interesting tidbits from that article: In 1860 the candidates for President did not campaign at all once the nominations were made by the respective party conventions.  About four million white men were eligible to vote in 1860.  Lincoln got about 40% of the popular vote, and a majority of the electoral votes.  (The remaining votes were split among three other parties.)

Some would say, today, that those were really the “good old days”….
Today, of course, the environment is different.  Most everyone who is an adult has the opportunity to be well informed and a theoretical right to cast a ballot for his or her representatives.  There are plenty of efforts to disenfranchise certain kinds of people, but those efforts need to be more covert.
Virtually everyone is susceptible to bombardment by “information” conveyed through newspapers, magazines, radio and television, computers and other means.  We are awash in good information and bad, and the information is not always shared by people with our best interests at heart.
“Caveat emptor” – “let the buyer beware” – is good advice.  The public is daily played for fools, and needs to take responsibility for their own actions.
Polling a national audience, then publicizing the poll, about a United States Senator who has not yet even arrived in Washington makes no sense other than to attempt to drive up the negatives for future political advantage.
The soon-to-be Senator is likely well aware of this.
It is good for us to be aware of this as well. 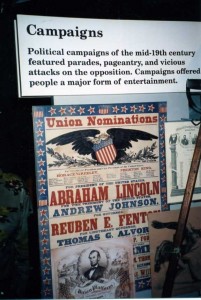