This noon Senator Al Franken stood in front of the Minnesota State Capitol to acknowledge the end of the 238 day quest to ratify his election to the United States Senate.
I went over to the event, and I was glad I took the time to attend.
The crowd was perhaps a few hundred.  Perhaps this was partly due to the reality that the Minnesota public has long ago become tired of the interminable delay in finishing this election contest – a delay which, depending on point of view, some would say was necessary, some not.  In the end the law was satisfied and the proper person, Al Franken, was elected to the U.S. Senate. 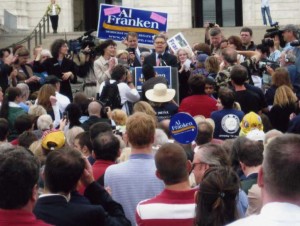 Today’s was an unusual political event in some ways.  The speechifying was serious; there was no blaming, at least none that I picked up.  The entire event was over in less than an hour, and basically began on time.  This is pretty remarkable these days.
The usual array of celebrities were introduced, but introductory remarks were very brief.
Minnesota Secretary of State, Mark Ritchie, who was heavily invested in making sure the electoral and post-electoral process went properly and legally, wisely chose to not attend.  Mr. Ritchie and his staff, both at the state and local levels, deserve immense credit for running an impeccable election within well-formed rules.  Nit-pickers had to greatly extend themselves to find even small points to criticize about the pre-, during, and post-election time period.
The mainstream press (which was publicly complimented for its work during the time of the election) was there in force, as was the more informal grassroots media.
What Mr. Franken had to say today will be dissected by many sources, today and later.
Some of the things I saw and heard which impressed me:
1.  The obvious partnership of Al and Franny Franken.  She was a part of the event, rather than a part of the background.  She’s an impressive lady.  The incumbent Senator mentioned that they first met 40 years ago this summer.
2.  Franken talked from the perspective of supporting the middle class.  He acknowledged that decision making will be difficult and complicated, but he understands middle class issues, and acknowledged that it is the middle class that is really the key to the proper functioning of our country.  He acknowledged the importance of Unions, including in his own life.
3.  Sen. Amy Klobuchar talked briefly about the reality of having only one Senator representing Minnesota for the last six months.  Most of us never need a Senators direct assistance, but don’t say that to someone who’s having trouble with a specific issue, say a delayed adoption of a child from another country.  A fully staffed Senate is essential.
4.  Sen. Franken will enter the Senate as a Freshman, and for all of us who have ever been a Freshman, anywhere, we know it takes time and effort to pay the requisite dues to become accepted.  The Senator is fully up to his task, I am certain.
5.  The new Senator made specific reference to his friend, Paul Wellstone, whose last major public appearance before his untimely and tragic death in 2002 was apparently made at the exact spot from which Mr. Franken spoke.  Wellstone acted with both courage and with common sense bi-partisanship during his dozen years in the U.S. Senate.  We would be well served to have a Franken that approaches public policy in a manner similar to Wellstone.  (I wore a Wellstone button to the event, today, and was reminded of the web-spot I have reserved to the memory of the Wellstones. http://www.chez-nous.net/wellstone.html .)
Near the close of the event, Sen. Franken made the single comment I wrote down: “I know for a fact that without you, we in Washington cannot succeed.”
Too often we view the people we elect as responsible for all the outcomes after their election.  What Franken was saying is that we, the body politic, have to do far more than just vote, or work for somebodies election.  We need to do the necessary work both ‘on the ground’ with neighbors, friends, family, as well as making sure our representatives know our opinions.
I predict that Sen. Al Franken will do a great job.  I wish him well.  Some general information about Sen. Franken is at http://en.wikipedia.org/wiki/Al_Franken
https://thoughtstowardsabetterworld.org/wp-content/uploads/2022/04/thoughts-300x138-1.jpg 0 0 dickbernard https://thoughtstowardsabetterworld.org/wp-content/uploads/2022/04/thoughts-300x138-1.jpg dickbernard2009-07-01 17:45:322009-07-01 17:45:32#46 – Dick Bernard: Sen. Al Franken enroute to Washington