For several years now, we’ve gone to the annual 4th of July Parade in nearby Afton MN.  Afton is a tiny place on the St. Croix River, part of Minnesota’s eastern border, and mostly known for its big Marina and as  an artsy place.  Yesterday we were there.
On the 4th of July Aftons population increases dramatically for the noon-time Parade, which is the only one I know of which goes to the end of Main Street, then doubles back.  The spectators can thus see the parade twice; the participants in the Parade can actually “watch” it themselves as the units return on the other side of the street.
The latter fact would have been approved by my Grandpa Bernard who had a 1901 Oldsmobile (it’s still a working automobile in California), and was often asked to drive it in the local July 4th parade in his town of Grafton ND.  He rarely took the bait for this since, he would complain, “I can’t watch the parade, only the back-side of the unit in front of me“.  Those days – he died in 1957 – there weren’t means of recording the parades for replay back home on cable television or otherwise.  You saw it in real time, or you missed it. 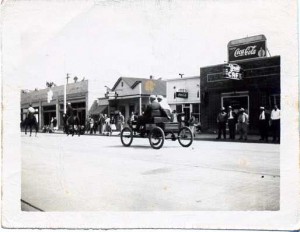 I have sometimes walked in parades, usually for political candidates, so I understand Grandpa’s complaint.
I like parades.
Yesterday’s, though, for some reason seemed a bit flatter than usual.  There were fewer units and less enthusiasm.
As is usual, the parade was headed by a couple of old (my age) military veterans carrying the U.S. flag.  People, including myself, stood, doffed their hats, and applauded either the veterans, or the flag, or both.
Following behind was a gigantic Armored Personnel Carrier, and behind, and included with, it a troop of Boy Scouts.  It was a rather odd combination, I felt, but I’m used to odd combinations.
Back home, afterwards, the cacophony, and dissonance, of the internet brought endless competing views of what July 4 means, or should.  Some enterprising bunch was selling robo-faxes at a steal, to send fax’ed tea bags to every member of Congress (it’s worth a blog entry of its own, to follow tomorrow): an anti-tax protest on the 4th of July.  A patriotic piece came around that caused me to check on the urban legends website, and indeed, the piece was part fact, and part fancy, with no effort to separate myth from real.
On the other side, came an appeal to do more Peace vigils in the coming months.  Etc.
The President weighed in with a brief statement of the signicance of the day with the concluding sentences “It is a day to celebrate all that America is.  And today is a time to aspire toward all we can still become.” with an ending “P.S — Our nation’s birthday is also an ideal time to consider serving in your local community.  You can find many great ideas for service opportunities near you at http://www.serve.gov. “
Last night  there were the annual fireworks in a nearby park.  A particularly loud crescendo of the traditional “bombs bursting in air” woke me from a sound sleep.
I think, wouldn’t it be nice if some day in this country, the Parade would be headed by some kind of group carrying a World Peace flag, and people were applauding them.
To hear John Denver sing “Last Night I had a Strangest Dream” go to http://www.amillioncopies.info.  Click on Denver’s image at the left of the home page.  And wander around in the website for a bit….
UPDATE 5:20 p.m. Sunday, July 5, 2009
Immediately after clicking ‘publish’ on the above, I went in to my Church, Basilica of St. Mary, Minneapolis, for the usual Sunday Mass.  Basilica is a very large and very diverse Parish, at the edge of downtown on downtowns historically premier street, Hennepin Avenue.  Typically Basilica has lots of visitors; it is conservative and it is liberal, rich and poor.  On a typical Sunday, a fair number of homeless show up for coffee and donuts.
Basilica is also a Peace Site, and a year ago made a formal commitment to Peace as a key part of its Centennial celebration.
Today I saw that commitment before and during the service.  A large “Peace” sign welcomes people to the church (see photos from Basilica calendars at the end of this article.)
In today’s service, the opening song was Sibelius’ “This is My Song” from Finlandia: (“But other hearts in other lands are beating, with hopes and dreams as true and high as mine.”)  In the sermon, a key part of the message was recollection of a young man at a July 4 celebration who carried a sign “God Bless the whole world.  No exceptions“.  The intercessions included prayers for Peace and for those in service to this country of ours; the recessional was America the Beautiful, and the Postlude was Sousa’s Stars and Stripes Forever.
I had nothing to do with how today’s service was put together.  But I liked it, a lot.
In short, Basilica seems to cover all the bases towards a better world.  Basilica is a formal Peace Site, #419 at http://www.peacesites.org/sites/map 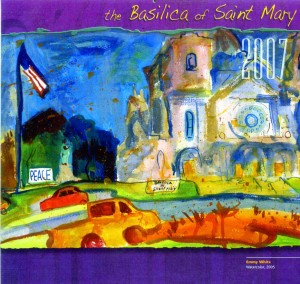 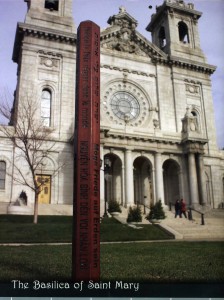