Early last evening I was watching my usual news program and a guest was talking about how New York Legislature was about to pass a law authorizing same sex marriage in the state of New York. I’ve been around political decision making for long enough, and closely enough, to question the judgment of a premature announcement of a bill which would be, but had not yet, passed and was still questionable…one doesn’t announce a victory with ten minutes left in, say, a basketball game.
But announced it was. And it happened. And it apparently has already been signed into law by its architect, Gov. Andrew Cuomo.
There will be countless opinions flooding the news on this issue. Here is my small ‘squeak’.
This is great news, long overdue. As I understand the law, my Catholic Church doesn’t have to marry Gays; neither can it block Gays from getting married.
This is a very big deal on a great many levels. To me, it is one more piece of evidence that sanity is beginning to return to the political conversation – and by “politics” I mean “people”, generally.
I’m straight, and I thus have no direct personal “frame” to understand the Gay perspective. But that’s the most important reason why such a Law as this is good.
Even most religious leaders who despise what they consider the Gay lifestyle seem to agree that God approves of Gays – at least they admit this on paper. But they don’t understand how it is to be Gay, thus they attempt to throw the theological “Book” – their interpretation of the Bible – at it. “Belief” is made to reign.
I really don’t care if my local Archbishop doesn’t like this new Law, or if my local legislator recently went with the majority to deliberately bypass Minnesota’s Governor and authorize an initiative on the 2012 election ballot to enshrine into our Constitution a provision making gay marriage unconstitutional.
New York went with common sense last night.
(I wonder if our Legislature rules are similar to those in Roberts Rules: where decisions made can be reversed if people who voted on the prevailing side move and second to rescind their previous action. If so, maybe this is still a possibility. In fact, I had this as one of my possible questions at a Forum with Legislators a couple of Mondays ago.)
What happened in New York State overnight was a huge big deal. It won’t make the issue go away in other places. But it will be instructive; and it will empower people like ourselves to speak more confidently and informed about this issue.
I think of two evenings ago, at our annual suburban political party picnic.
This years event was in relative terms lightly attended, largely due to chilly and uncertain weather. We had the usual political speakers, but the first one was very unusual for us. Teresa Nelson, Legal Counsel of the Minnesota branch of the American Civil Liberties Union, addressed us about two issues she felt were absolutely critical for basic civil rights in the upcoming year. 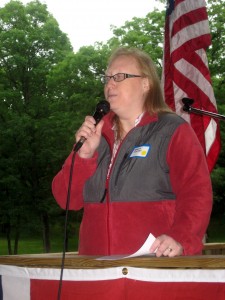 The first issue was the proposed constitutional amendment on marriage; the second was another proposed constitutional amendment on a voter id bill whose only purpose is to suppress citizen right and ability to vote. Both are, among many others, national initiatives appearing in many places in slightly different forms.
We citizens have work to do in the coming months. Too many of us have not been engaged. If this applies to you, now is the time.
I offer one last thought on the marriage issue:
My hobby for 30 years has been family history.
In the course of researching my French-Canadian side I came across the marriage contract between my first Bernard ancestors in Quebec, in the year 1730. The translation of this contract is Quebec Marriage Cont001
It is worth taking the time to really analyze this contract: who it was with, what it says, etc. (Here’s the summary: the 1730 document was a civil contract, between the parties and the State, to be followed, two weeks later, by the religious Matrimony….)
Of course, Quebec then was an exclusively Catholic country, so the marriage ultimately had to be finalized in the Catholic Church.
But the U.S. is not Quebec. And the Catholic Church in today’s Quebec is, I’m told, all but completely irrelevant….
UPDATE: This over nite blog post does a good job of defining what’s going on with the political decision making on this and other issues as well.
https://thoughtstowardsabetterworld.org/wp-content/uploads/2022/04/thoughts-300x138-1.jpg 0 0 dickbernard https://thoughtstowardsabetterworld.org/wp-content/uploads/2022/04/thoughts-300x138-1.jpg dickbernard2011-06-25 05:09:062011-06-25 05:09:06#388 – Dick Bernard: Gay Marriage in New York State