This post is about American politics. I have made it a practice to be well informed politically, and this has been a practice for many years.
This post – in two segments – is considerably longer than most items I write (several typewritten pages). Please don’t let that deter you. Some things cannot be summarized in a few words. (While my ‘base’ is in Minnesota – I’ve lived here for the last 45 of my 70 years – I know enough about the national scene to be aware that what is happening in my state is happening in varied ways in other places as well.)
My point of reference: since the beginning of this blog a year and a half ago, I’ve identified myself as a “moderate, pragmatic Democrat“. I’m comfortable with that label. Please don’t let that deter you. A trait I share with most liberals I know is a basic and very positive conservatism. We are not reckless. We seem more ‘conservative’ than most of those who proudly label themselves ‘conservative’. My best political friend till his passing several years ago was a retired Republican Governor of MN. Were he alive today, I’d likely be very favorable to Dwight D. Eisenhower as President. He was President in my high school and college years. I am active on the local level in the Democratic party. I care deeply about where our country is headed.
*
Part I: The Honeymoon Trip:
October 30, 2000, my wife Cathy and I flew to Washington D.C. to begin a short trip after our marriage.
We had planned this honeymoon trip for some time, and divided the week into two segments: the first in Washington, D.C.; the second in Concord, MA.
This happened to be a Presidential election year. A bit earlier in October I had sent my personal ‘campaign’ letter regarding the 2000 Presidential election to family, friends and colleagues. (If interested, here it is:family letter oct 2000001.)
Among our stops in Washington were tours of the White House and U.S. Capitol, as well as a few other ‘high spots’ of tourist DC.
At the Capitol, we learned that the U.S. House of Representatives was having an unexpected evening session on Halloween, October 31, so we contacted our local Congressman’s office, and got gallery tickets. 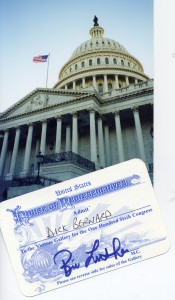