Monday, July 12, was the six month anniversary of the catastrophic earthquake that devastated Port-au-Prince and area in Haiti.
That same day, I spent a few hours helping my Uncle and Aunt, out at their now-empty North Dakota farm. (They’ve lived in a nearby town for several years – an option they don’t like, but the only reasonable option they have. They are at an age, and their medical conditions are such, that they could no longer survive independently on this place where they lived as brother and sister for over 80 years. My uncle is 85, his sister, my aunt, turns 90 a week from today. Their house remains much as they left it, but they don’t live there, only frequent visits.)
One of Monday’s tasks was to empty their freezer which included frozen produce from their garden, some of it ten years old. They knew it had to be done: my uncle, in fact, brought up the idea. That produce in that freezer would never be used by anyone, including themselves. But the notion of wasting this food was reprehensible to him. He was nine years old during the worst year of the Great Depression in ND, 1934, and he knows what it is like to have nothing.
We unloaded the freezer, and put its contents on the back of his old pickup truck, and drove down to the family garden – a one acre plot, used by the family for many years. The garden is still used by the couple, but only a tiny portion of it is planted. They don’t have the energy to garden more, and even if they did, the produce would go to waste: for them, it is unusable.
During the Depression and other bygone years, there were eight people or more who depended on that garden, but the prospects of even a small crop to harvest and process for the winter were not always good. Once experienced, one tends not to forget such experiences.
Those bygone years, the normal process was to pressure cook and can the food, in sealed glass jars. There was no electricity and thus no freezer; there were no plastic bags – a product of the petroleum industry. Kids now-a-days would be hard-pressed to even imagine the planting/growing/harvesting/preserving process which people of my generation grew up with. Forced to live that way again, most of us would not survive, literally.
Down at the garden we emptied the plastic bags which had held the frozen produce of the farm: spinach, corn, beans, peas, broccoli, onions, apples, and on and on and on. Considering it was ten years worth, it really wasn’t a lot of, as my uncle would say, “wasted food”.
While he was sitting on the tail gate of the truck, opening and emptying the bags, he was lamenting the waste, here, while so many people were starving elsewhere. No, he didn’t think that frozen bag of kernel corn should be sent to Haiti; more so, the notion of waste was on his mind. He wants to help, but how? People his age get endless appeals for funds from all manner of agencies. My advice to him: throw them away unless you know the group is good. So many are simply scams.
I doubt that he – or I, for that matter – thought about the amount of electricity that had to be consumed to keep that food frozen….
Haiti, and that waste at the farm unexpectedly came together for me a little later in the day. Back at my temporary home in the local motel, I flipped on the television, and happened across a CSPAN program recorded earlier that day: a panel discussing Haiti six months after the earthquake. The program is well worth watching. It had not occurred to me till that moment that July 12 was indeed the six months anniversary of that humanitarian disaster.
Back home in the Twin Cities the next day, there were several e-mails with varying perspectives six months after the quake in Haiti. Mostly, though, Haiti is out of sight, out of mind, even for people like myself who have a great interest in Haiti.
More on our minds, currently, is the catastrophe in the Gulf of Mexico: hundreds of millions of gallons of crude oil befouling the Gulf: oil which was to be used for the fuel that got me out to that North Dakota farm, and back; and which was used for to manufacture those plastic bags we had just emptied.
Mostly, for most of us, life goes on. “Don’t worry, be happy”. We’ll always have it all.
Don’t count on it. 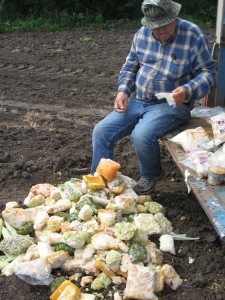 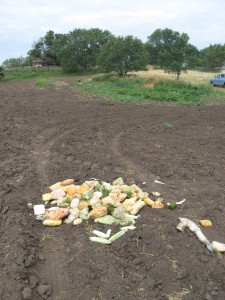 The farm garden, before an acre, presently only a small plot.