HAPPY THANKSGIVING.  Check back for a specific Thanksgiving post Thursday or later.

When I last blogged about politics, Election Day eve, Nov. 8,  I knew nothing, intentionally, about the later results in my community.

Nov. 9-13 we were at a family event in New York state.  I don’t connect with the internet at such times, so what actually happened in MN was a mystery till after we returned.

Yesterday, forming this post in my mind, I kept thinking of two seemingly unrelated events.  I’ll briefly revisit both at the end of this post.

In July of 1949, we were at my grandparents farm, my Mom’s home, probably related to her 40th birthday.  Late at night a vicious wind came up, terrifying everyone.  I was nine, the oldest kid.  Morning light brought the verdict; the barn roof was gone; house escaped unscathed as did the occupants.  (In the photo, I think I’m the kid in the overalls walking away from the likely photographer, my Dad). 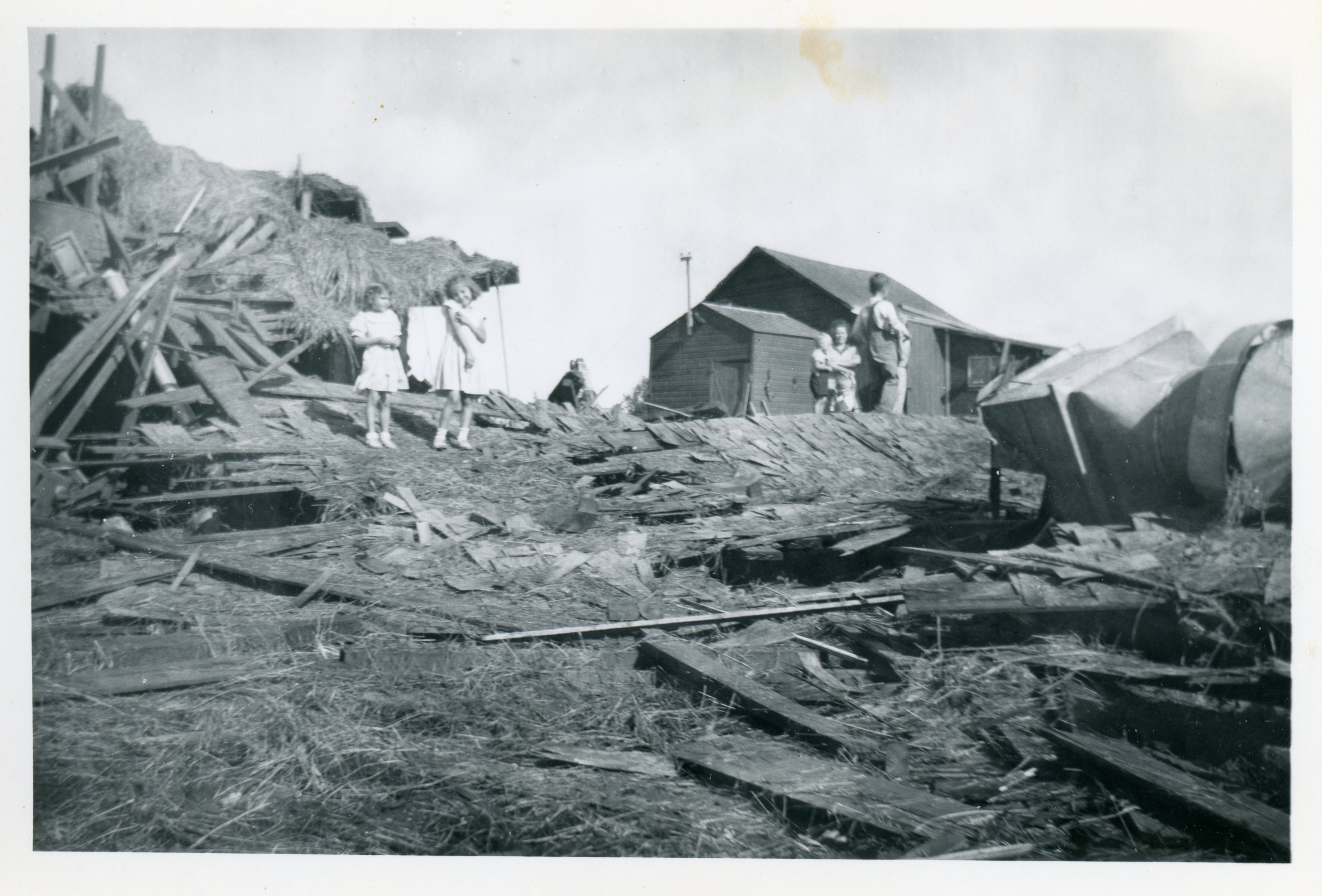 Residue of Busch barn, late July 1949, Berlin ND. Richard, and siblings and Mom in the photo.

Eight years later, September of 1957, at 17, I had the opportunity to see Louis Armstrong and band in concert in Carrington ND, pop. approx. 2,300.  The concert was fabulous, of course.  I’ve always wondered how someone like Armstrong would appear at the Armory in this tiny town.  And where would they stay?  This was 1957, after all….

Now to the business at hand:

Last summer, I decided to pay the closest attention to the 2022 elections closest to home – my own state Senate and Representative election – a piece of suburban geography with 56,624 eligible voters.

(Earlier, at the primary election in August, I aimed my attention solely at a local school referendum, which I wrote about here.  School District boundaries are different than legislative boundaries in Minnesota, thus size, shape and population differ.)

Below are the 2022 election results for my district, SD 47.  (If you are a Minnesota resident, here’s the data source for your district.) 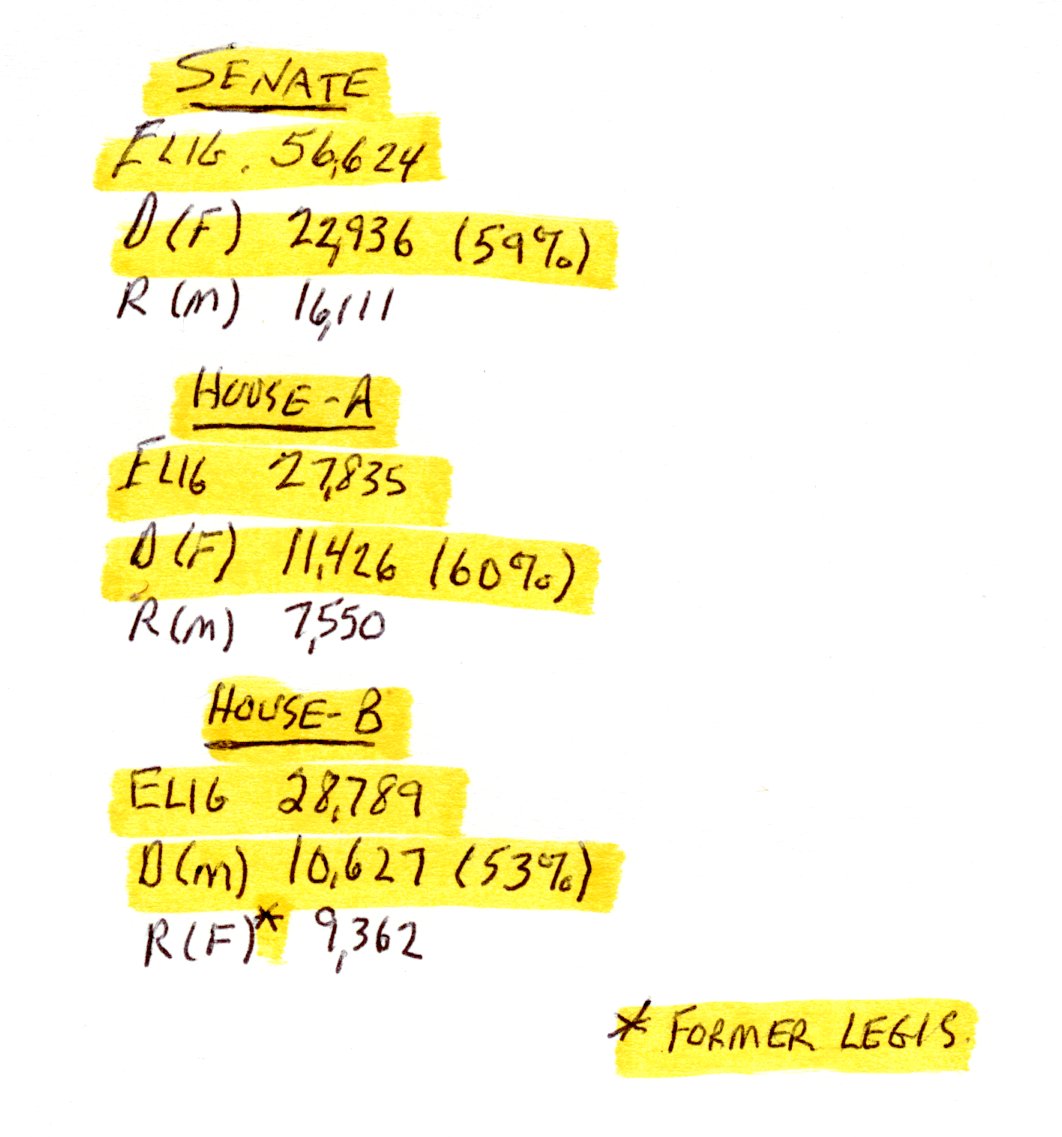 Five of the our candidates were rookies; the 6th had been in the House of Representatives for two terms some years earlier.

Hi-lited are those I supported for election.   Congratulations to new Senator Nicole Mitchell and new state Representatives Amanda Hemmingsen-Jaeger (A) and Ethan Cha (B).

For Democrats in this district, and indeed in Minnesota, and nationally, it was a good night.  Voter turnout was high, near 70%, characteristic for this state. Our numbers seemed in line with earlier similar elections in this area.

There were no controversies of any kind, at least none of which I’m aware.

I have no idea about how any individual voted, unless they volunteered the information.

I have lived in the same dwelling in this suburban community for 22 years.  We are part of a metropolitan area of over 3,000,000 people, containing nearly two-thirds of Minnesota’s population.  I am not a hermit, and see folks in assorted contexts each day – though mostly they are people I don’t know.

For the past several years, we have not had a local newspaper.

We have had Republican Senators and Representatives in recent years.  Indeed, for some years we had an arch-conservative member of Congress for several terms.

This year there were far more campaign lawn signs for the Republicans (R) than Democrats (D).  But the “Republican” candidates did not seem to want to call attention to their party.  This was obvious from the signs themselves.  Their internet presence  was pretty minimal.  There were few mailings, compared with other recent elections.

My takeaway from this particular election is simple: people were quietly paying attention to the issues.

I get a sense, not only from the election results, but from the ordinary day to day interactions I see and hear, that people generally are satisfied with what happened Nov. 8.

They are tired of the violence – verbal and otherwise; intolerance; dishonest political discourse; a focus on  winners as individuals, belief rather than fact, division not unity; a fractured sense of community…on and on.

My colleague citizens sent a message, local, state and national, that they just want to see more of a community focus as opposed to an individual focus.  They just want our country and its smaller subdivisions down to and including families to work, and to be fair.

If I was to make any recommendation, it would be to the reader to do the same as I did: do an informal assessment of what happened in your own basic political unit in your state.  It will give you a knowledge base.  Then set about helping educate other citizens about the importance of their informed vote.

Congratulations to my local successful candidates.  In my opinion, they deserved to win.  Now their work really starts.

Now, about that barn, and Louis Armstrong.

The barn was rebuilt, doubtless primarily with lots of voluntary community support.  It is my metaphor for community.  Grandpa had let the insurance lapse, I’m told, so he learned a personal lesson there.  Last time I was out, the barn still stands, but clearly on its last legs.  But it wouldn’t have survived at all without community.

As for Louis Armstrong, many years later I was watching the Ken Burns film on Jazz, and in one segment was a brief television interview with Louis Armstrong in Grand Forks ND, likely where his band had been the night before I heard him play.  In the interview, he was concerned about those children at Little Rock Central High School (as noted earlier, remember, this was 1957).  Nonetheless, Louis continued on, in a hopeful optimistic way.

We have a great plenty of things to deal with, but Nov. 8 provides an opportunity to redirect to a better future, to add on increments, rather than tear down.]

I’ll close with my favorite Louis Armstrong tune, his rendition of Wonderful World.

POSTNOTE:  The 8th, and I believe final, episode of Rachel Maddow’s Ultra series is now available.  Here is the link.  I have listened to them all.  Very informative…and troubling.  Take the time.

Today is the anniversary of the assassination of President John Kennedy Nov 22, 1963.  I was in my first month as a teacher in Hallock MN, recently discharged from the U.S. Army.  Like all of us from that era, I will never forget that day and the days following.  Here’s Heather Cox Richardson’s commentary published late on Nov. 22.

from Joyce:  I think this blog post by Digby is relevant: here

response from Dick:  I agree with the concern.  Take time to read the commentary.  My greatest concern is that even in Presidential elections, about one third of eligible voters don’t even vote, and that’s just the beginning of the problem.  Too many vote only for President, or have not a clue of the qualifications of candidates for the other offices, etc. We are a very sloppy democracy, exploitable.

from Jermitt: Thanks for your message, Dick.  I enjoyed reading about the politics of your district, as well as your family and your story about Louis Armstrong.  We, here in Marquette County Wisconsin have a long way to go.  The Republicans out number us (The Democrats)  2 to 1.  The Marquette Democrats continue to message our values through radio, print, and social media.  We also knocked on hundreds of doors this year.  While we increased our percentage, we continue to lose elections although the democratic candidates have been outstanding, compared to the Republican candidates that have won in state elections.

response from Dick: Many thanks.  My only point, at this moment, is that every place is different and perhaps the best starting place is to get to understand our own district a little better.

from Len: Thanks for sharing your perspective and numbers of the results of the election. We will be talking about this one for awhile. 47 chose some good solid individuals for office. Quick studies and thoughtful individuals who will represent us well and will enjoy DFL majorities across the board in governing and the challenges of a rarity- a budget surplus. We need to be vigilant and help them in their decision making.