Less than two months after the devastating January 12 earthquake, Haiti has become old news.
Dr. Joia Mukherjee, native of Bengal and graduate of the University of Minnesota Medical School, and for 11 of her 17 years as a physician part of Partners in Health, brought Haiti back in sharp focus before a large audience at St. Paul’s Macalester College Tuesday evening. Here is a recent commentary about Haiti written by Dr. Mukharjee. Her remarks on Minnesota Public Radio on April 6, 2010, are here.
The awful remains obvious in Haiti: according to Dr. Mukherjee, 250,000 died in the quake, roughly one of every ten Haitians in Port-au-Prince and area. 300,000 more were injured, mostly orthopedic and neurological injuries requiring surgery. And 1.7 million Haitians were displaced, one of every five Haitians.
Some of the worst problems – basic mental health issues as a consequence of the Quake and displacement, and the upcoming rainy season – are less obvious now, but are major. Haitians are resilient, but this catastrophe stretches the national and individual psyche to the breaking point.
In a country with essentially no government, and no funds, with the rainy season fast approaching, and hurricane season not far behind, it is hard to see any silver lining behind the abundant misery in Haiti.
But Dr. Mukherjee conveyed a message of hope, most dramatically through the voice of an old woman who told her not long after the tragedy, near neg maron, the statue of the free man in the ruined Presidential Palace area, “The free man will never be defeated”. Through all of the tragedy which came along with independence when Haiti’s slaves threw off their shackles in 1804, Haitians have an enduring pride and resilience and it is that spirit which holds them in good stead even when hope seems an impossible dream.
We were given a brief lesson about Haiti, and with the lesson an encouragement to learn more about this place and its people. Kreyol is thought to be primarily French, but the richest parts of the language come from its African Bantu roots.
There are immense challenges ahead for the Haitians, Dr. Mukherjee said, but with assistance they are equal to the task.
Given the immensity of the disaster, and the slowness of recovery efforts, it is remarkable how little violence there has been. Encampments have quite effectively organized themselves into communities with de facto leaders, “mayors” in a sense. Partners in Health believes that true accompaniment – walking with the people – is absolutely essential in the recovery efforts. Rather than telling, ask the people what they need. They know. Work with the people and with the Government as it exists, then do what can be done to help the people fulfill the needs, and have them rebuild their own society. Basic rights for all people are education, medical care, water, food and shelter.
Partners in Health, which began in Haiti, but now works throughout the world, has an important sense of what works for Haitians in Haiti. The vast majority of PIH’s staff is native Haitian.
A particular and perhaps paradoxical dilemma in Haiti is the massive number of non-governmental organizations (NGOs). In Rwanda, we were told, there are 200 NGOs; in Haiti, about 10,000. And these are countries roughly similar in size and population. NGOs are essentially governments unto themselves, and represent their own particular problems. They are a mixed blessing.
Haiti’s government essentially ceased to exist after the quake, and recovery has been slow and difficult. The government has no money. Of every dollar in aid, only one cent goes to the Haiti government. The standard excuse for this is “fear of corruption”. The doctor retorted that this is a misplaced fear. If we wish to view corruption, all we have to do is to look at the Wall Street collapse of 2008. Most corruption occurs long before the money reaches any one in Haiti.
Dr. Mukherjee feels we all have a very useful role to play in Haiti’s recovery and future. We need to keep seeing Haiti, and there needs to be a movement of solidarity for Haiti. Such movements against Apartheid in South Africa and more recently the AIDs initiatives resulted from people working together over a long period of time. In all the many ways that we can, we need to make our own government aware that we are watching, and we are concerned. 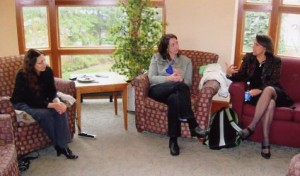 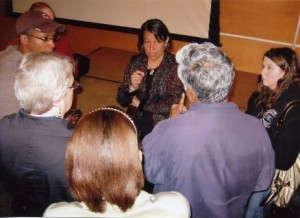