The posts for March 7 and 9 relate to this post.
I would invite you to read the Affirmation of Human Oneness, and then scroll through the translations into over 40 languages of that Affirmation. Later return to the site to read more about the history of the Affirmation, about its author Joseph Schwartzberg, and also about Lynn Elling, whose Declaration at the same site is the reason for the site.
Friday, March 5, 2010, was the first appearance on the internet of the now-42 translations of Professor Schwartzberg’s Affirmation of Human Oneness, a statement he had first crafted in 1976, and over the years has been slightly modified* (link noted in previous paragraph). Also on March 5, I displayed for the first time a notebook including all of the translations for a display at the Nobel Peace Prize Festival and Forum (see #166 for March 7).
The Affirmation remains a work in progress. Dr Schwartzberg notes that amongst all the languages and dialects of the world, “at least one of these languages [on this website] will be understood by well over 95% of the world’s literate population”
It was interesting to note the reactions of people of all ages to the translations. A number of visitors either came from or had grown up in a country with a language other than English.
If their specific language appeared in the book, their eyes lit up; if not, they were disappointed.
Language, whether written or only verbal, is a very important part of the identity of people. (Dr. Schwartzberg continues to seek proper translations into many other languages.)
I noted something else from the visitors as well. Some would look at a specific translation (each prepared by someone with recognized competence in the language), and suggest that an incorrect word* or interpretation had been used to represent a specific word in Professor Schwartzberg’s original. This is an inevitable problem when persons seek to interpret a language, including their own.
But even with these disagreements, it was still enjoyable to see persons eyes light up when they saw that the Affirmation had been presented in their language, and in its own unique script. That the words were there on a piece of paper conveyed a sense that their culture was valued.
The internet, which was barely taking off by the early 1990s, when Dr. Schwartzberg sought the translations, has become a major means of conveying knowledge and understanding, and now the Affirmation in many languages is on the ‘net, instantly accessible anywhere in the world.
Diverse persons can now dialogue about the words and their significance, and about how we all, regardless of language, can better relate to each other. This is a hopeful development, and I’m happy I could be part of it. 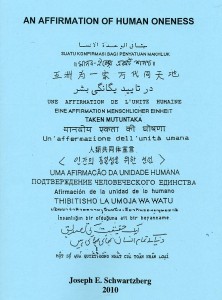 Some of the Title Lines of the Affirmation, in 21 world languages.

* – Part of this discrepancy flows from the fact that the Affirmation is still a work in progress, and on occasion over the years a word or phrase was changed after a translation had been made.
PS: There is a footnote to this story. When I developed the idea for www.amillioncopies.info in 2007, my specific intention was to make it as a tribute to Lynn Elling. But I also knew, at the time, of Dr. Schwartzberg’s Affirmation of Human Oneness, and it seemed an ideal companion to the Declaration of World Citizenship. So the two separate works have appeared side by side, with the permission of both men.
It was not until the evening of March 5, 2010, that I learned from Prof. Schwartzberg that Lynn Elling, back in the 1970s, had in large part helped to inspire him to read the book that inspired the Affirmation (See Dr. Schwartzberg’s Prefatory Statement.)
https://thoughtstowardsabetterworld.org/wp-content/uploads/2022/04/thoughts-300x138-1.jpg 0 0 dickbernard https://thoughtstowardsabetterworld.org/wp-content/uploads/2022/04/thoughts-300x138-1.jpg dickbernard2010-03-08 22:50:352010-03-08 22:50:35#167 – Dick Bernard: Words Affirming Human Oneness