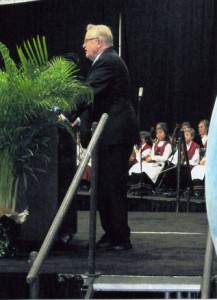 Mr. Ahtisaari is a little older than I am, and certainly far more famous, and by all accounts far more accomplished as well.
But he tended to burst that celebrity bubble by his demeanor in person, and by his comments both to school children, and later to adults, at the Nobel Peace Prize and Forum.
Ahtisaari quietly asserted that the dynamics for settling even the most difficult problems resides most effectively with leaders in local communities. He mentioned at one point a wait of two years before the most effective mediator within a particular society was identified – a person who could help bring parties together to settle a long festering conflict.
Even from far away, you could sense that this man is a listener, one who wants to know to whom he is speaking, and listening even while speaking. In the evening we were in a dark auditorium, and he asked for lights so that he could at least see those to whom he was speaking.
I have participated in many mediations over the years, and came to feel that skill as a mediator is as much a gift as it is a specific set of professional tools and tactics. Someone like Mr. Ahtisaari has to be a very keen observer and a very active listener. When he asked for lights, he was saying much about his style, talking with, more than talking at, an audience.
Another essential skill for a mediator is the ability to be very, very patient.
After receiving the Peace Prize in 2008, he was invited to join The Elders, a prestigious group of leaders with a world reputation.
Among his role models were Nelson Mandela and Desmond Tutu of South Africa, both of whom are legendary in reconciliation with enemies who most would have found difficult to forgive.
I don’t recall anything dramatic in Ahtisaari’s talks (at any rate, the auditorium was too dark to take notes!). He was a down-to-earth man, seeming to be completely congruent with his roots in rural Finland.
Someone asked him to comment on his successor as Nobel Peace Prize winner, Barack Obama. He said he was honored to precede President Obama. Someone else asked about Obama’s military engagement in Afghanistan. To this listener, Ahtisaari understood the quandary faced by the U.S. President.
We tend to set on a pedestal people of Martti Ahtisaari’s stature.
Mr. Ahtisaari in his quiet but persuasive way said to all of us, “you can do it, too, and you must…. 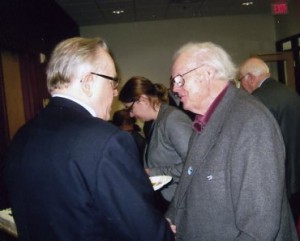