#167 & #168, published March 8&9, relate to the following post as well. (Here’s a photo album of some pictures I took at the Festival.)
After lunch on Friday, March 5, I was seated on the dais with four others, opening the afternoon program of the 15th annual Nobel Peace Prize Festival.
Seated to my left was high school exchange student Naweed A., an impressive young man from Kabul, Afghanistan, who is spending the year in Minneapolis. Naweed and a number of his colleague students attended the Festival. They are here under the auspices of the World Link program. To my right was my friend, Lynn Elling, now 89 and co-founder of the Peace Prize Festival, founder of World Citizen, and recipient of the 2010 World Citizen Award (presenting this award was my reason for being on stage). To Mr. Elling’s right was Rev. Dr. Mitri Raheb, Pastor of the Evangelical Lutheran Christmas Church in Bethlehem, and Dr. Geir Lundestad, Director of the Nobel Institute in Oslo, the organization which grants the Nobel Peace Prize each year. It was inspiring for me to be part of this program, and a privilege to be on stage with them. 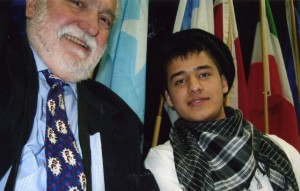 Earlier in the program, 2008 Nobel Peace Prize Laureate Martti Ahtisaari, dipomat and former president of Finland, spoke to the several hundred elementary and secondary school students. He also spoke later at the more adult-oriented Nobel Peace Prize Forum, since 1988 an annual collaborative event which rotates among the five midwest Norwegian Lutheran Colleges (in Minnesota: Augsburg (Minneapolis), St. Olaf (Northfield) and Concordia (Moorhead); in Iowa, Luther (Decorah); and in South Dakota, Augustana, (Sioux Falls).
Mr. Ahtisaari is an immensely impressive diplomat, recently invited to become part of the outstanding leaders group known as The Elders. Men and women in Mr. Ahtisaari’s profession of mediating disputes know the rout to “yes” is slow, often torturous, but worth the trip. It was a privilege to meet him. 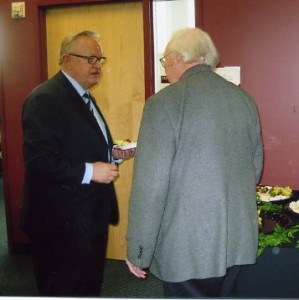 At the Festival (for the past 15 years an annual program at Augsburg), the program which flowed from the adults to the students was basically verbal. From the students to the adults and their fellow students the messages sent were musical and visual, singing, instrumental music, displays and interactive projects celebrating peace and past laureates.
It strikes me each time I see this dichotomy of communication, that if adult words could somehow be replaced with or at least augmented by music, art or dialogue, our conversation amongst peoples might be a bit different than it is. More on this tomorrow.

All the adult speakers were clear that the future is for the children to build.
Mr. Ahtisaari, who was born in Finland in 1937, and became a refugee at two years of age when his part of Finland was taken over by the Soviet Union, would have been the age of Naweed in about 1954. I thought of Naweed in context with the Nobel Laureate.
In not too long, Naweed and his generation will be the ones responsible for the future of their planet. My hope is that they will be better stewards of the earth than we have been. They will have to be better stewards, or there will be no future for them. Particularly in the 20th century, we had the unfortunate luxury in the west to waste and destroy earth’s riches. We also built the means to destroy ourselves. The next generations need to preserve and rebuild.
My hope for them: that they do not repeat, and indeed start to reverse, our abundant mistakes.
To Naweed and his generation all over Planet Earth, my best wishes for a great future.
I invite you to read the post to follow on Words, at this space, March 8, 2010.
And listen to this song on YouTube, forwarded by a friend today. 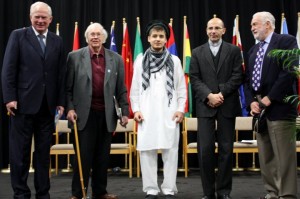 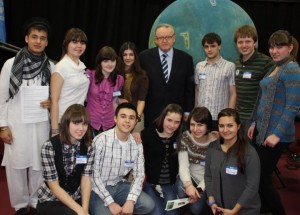 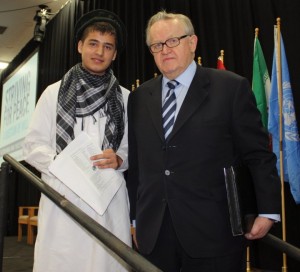