Last week I had two opportunities to listen to a motivated lady, Margaret Trost, head of WhatIf? Foundation, a U.S. non-profit dedicated to the possibility that some hungry children in Haiti might have at least one good meal a week.
Margaret was inspired nearly ten years ago when she made her first trip to Haiti, and a Priest there, Fr Gerard Jean-Juste (see end of this post), answered an innocent question for her in Port-au-Prince. His dream, that the kids in his parish would have at least one good nutritious meal a week, inspired her. (See blog post on Father Gerry at May 28, 2009.)
Three years later, in Port-au-Prince, the same Fr. Jean-Juste inspired me.
Paul Miller, who brought Margaret Trost to Minnesota two weeks ago, convinced me to go to Haiti in December, 2003, and thus meet Jean-Juste and so many other advocates for justice, and victims of injustice, who in turn inspired me. Such is the way that things happen. 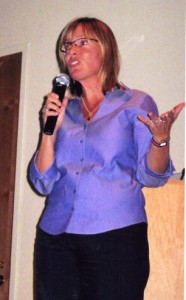 Today is Thanksgiving in the United States, and for most of us, middle class and up, the lament at the end of this day will not be too little food, but the consequences of eating too much.
Then, for many, the preparations will begin for “Black Friday”, the day after Thanksgiving shopping spree, guesstimated by business to be less frantic this year than last, but still dubbed “black” because it is the day of intensified retail profit-making for the “Christmas season”: “in the black”.
In Haiti and in most other places in the world, “Black Friday” is most every day for most of the people, and has an entirely different meaning than it does here.
It is worthwhile to consider, this Thanksgiving, amidst the din of the prophets of doom saying we can’t afford health care for all in our country, to consider all that we really have, especially the 80 or so percent of the people in the U.S. who live very comfortably compared not only with the people who have less, but compared with almost anyone anywhere in the world. We are very, very wealthy.
I’ve noticed we Americans don’t like to talk about their money – their personal finances. It is one of the taboos, it seems. “None of your business….”
But if you’ve read this far, take a couple of minutes today to calculate your own personal net worth: assets minus liabilities. If you’ve read this far, you know what the terms assets and liabilities mean, in the broadest sense of the words. In addition, maybe you’re hoping to inherit something from somebody. Consider that an asset, too.
Even if you’re not sure of that inheritance windfall down the road, or building that inheritance for your kids, if you’re reading this on this screen, most likely you’re not wanting today.
With all the dooms-daying about not being able to afford to reform Health Care, our country is absolutely awash in accessible wealth. Together, we, could deal with all of the purported “crushing” national debt without making a serious dent in what we have. But it would take a collective effort. Too many of us consider it somebody else’s problem. It is our problem.
Hoarding our individual wealth will in the long run do us no good. Every one of us has a finite time on the planet. Hoarding the riches will have no enduring value to us. Sooner than later, we’ll be gone. Our financial portfolio won’t go with us. None of us really know what “heaven” is: most likely, they won’t ask for net worth, or have better subdivisions for some versus others.
Go ahead: figure out that financial net worth you currently have. Many if not most of you will be astonished at the amount. You are not atypical in our wealthy society.
Even many of “our own” have very little, but in this country, even having very little is a relative term: people in many places like Haiti depend on money coming from the “diaspora”, such as Haitians living in the States, sending back money to their families in Haiti. This is true for many countries. That’s “trickle down” economics as it works in life.
The matter, for us, is not the wealth we don’t have; rather it is the truly immense wealth we do have and guard jealously for all sorts of reasons.
We are wealthy.
Do the math.
Happy Thanksgiving.
Related comment: blog post on Fr. Frechette, October 25, 2009
Father Gerard Jean-Juste: 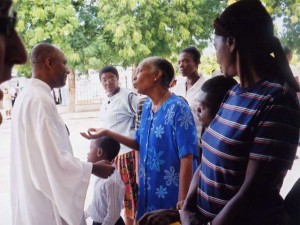 Father Gerard Jean-Juste died Wednesday afternoon May 27, 2009, in a Miami hospital. I had the privilege of getting to know Fr. Gerry, at least a little. He has had more than a little impact on my life.

That Father Jean-Juste’s time on earth was short was acknowledged, sadly, by all who knew him. He had been ill for a long while. So when word came that he passed away at far too young an age, 62, it wasn’t a surprise.

Gerry Jean-Juste was not a household name, except in the community of Haitians, and those of us with a passion for Haiti and its wonderful people. The Minneapolis Star-Tribune in the obituary section for May 28, made a special (and, frankly, surprising) note of his death, printing an Associated Press report that described him as “an influential Haitian Roman Catholic priest who was once jailed in Haiti for his political activities and fought for his countrymen’s rights in the United States…Jean-Juste founded the Haitian Refugee Center in Miami in the late 1970s. He returned to Haiti and spoke out against a coup in 2004 that ousted President Jean-Bertrand Aristide. He was arrested in 2005 on what human rights groups called politically motivated charges.”

He was one of only two in the “also noted” category of the obits.

The short obituary did not note many other facts, including his long confinement in a Port-au-Prince prison, the conditions he and his fellow prisoners endured there, and the fact that after his freedom no longer presented a “problem” for the powers that be in Haiti and the U.S., the charges against him were dropped.

I first met Fr. Jean-Juste as he said Mass at his parish, Ste. Claire in Port-au-Prince, on the morning of Sunday December 7, 2003. It was my first trip to Haiti and we had arrived less than 24 hours before. There are many memories of that Mass: most pertinent to today was his insertion into his sermon in Kreyol of a very special portion in English for we six visiting Americans. While he’s a Catholic Priest, I’m sure he wouldn’t mind me calling his English text a “give ‘em hell” message. We were guests from a powerful and omni-present country, the United States, which had and has huge influence over what happens in Haiti.

His was and is a poor parish, and he wanted to remind us of the poverty we were visiting, and the wealth we came from in the U.S., just one and one half hours away, and how far too many of his people were starving. It was one of those messages one does not forget.

The following day we had an extended private visit with him, adding greatly to our knowledge of his country, its problems and its relationship with the United States.

For the remainder of the week we visited many people and saw many things, all in Port-au-Prince and environs. Less than three months after our return home, Feb. 29, 2004, the democratically elected President of Haiti, Jean Bertrand-Aristide, was felled by a coup d’etat, most certainly facilitated by our own U.S. government in cooperation with France and Canada. Along with Aristide, all of his political supporters, especially opinion leaders like Jean-Juste, were at risk, and the elected government officials of Aristide’s party, Lavalas, suddenly became unemployed.

Suddenly it became unsafe to support the ousted government, particularly if you were identified as a supporter of Aristide and Lavalas. Jean-Juste’s fate was sealed.

Time passed, and in early March, 2006, we went back to Haiti, this time as part of a delegation for the noted Haitian micro-finance Fonkoze www.fonkoze.org. Our route east was via Miami, and with great thanks to a Haitian-American friend, attorney Marguerite Laurent/Ezili Danto of the Haitian Lawyers Leadership Network (HLLN), I was able to arrange a visit with Father Jean-Juste in Miami. At the time of our visit, Jean-Juste was officially and technically still under charges in Haiti, and in Miami solely for the treatment of his Leukemia.

But it was very obvious that the authorities thought he was no danger to anyone, so long as he was away from Haiti. The day we saw him, Sunday, March 5, 2006, he was free as a bird, and in excellent form, meeting with fellow Haitians in North Miami. For one not knowing any different, it would be astonishing to learn that he was technically someone still charged with a very serious crime. Of course, he had committed no crime other than politics, and everyone knew it.

Father Gerard Jean-Juste’s time on earth is now past, and he has made a great difference as a role-model for people who care. He is now at peace. He has left his work for all of us.

My accounts of my 2003 and 2006 visits to Haiti remain archived at my website www.chez-nous.net/peace_haiti.html . In the 2003 account there are brief mentions of Ste. Claire on pages 7, 8 and 19; I did not provide an account of the meeting with Fr. Jean-Juste in the 2006 account, since it was a personal add-on to a specific pre-planned delegation. 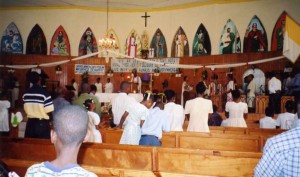