Saturday night the U.S. Senate voted 60-39 to avoid filibuster on the Health Care Reform Issue. Every Republican voted “no”.
The realistic expectation from here on out is that the Republican mantra will be to make sure Health Care Reform fails; indeed, that anything that the Democrats and/or President Obama wants will fail.
It’s a dangerous game because, through failure, we will all fail. We can let failure happen, or do something constructive.
Back in 1994 when Health Care Reform was debated, the vote was unanimous to avoid filibuster (“debate”). Of course, Health Care Reform died that year, and a comfortable Democrat majority (Senate 57-43 and House 258-176) became a nearly permanent minority as a result of the 1994 elections. It was not until 2006 when total Republican dominance of Congress and Senate was tamed (though barely: Senate tied, House 235-198). And not until 2009 – 10 months ago – when House, Senate and White House became Democrat for the first time in sixteen years. The new administration inherited a catastrophe.
Yes, it has been a Democrat majority for all of 10 months now. The Republicans dream of again scuttling critically needed Health Care Reform, and repeating 1994.
I think that this time the fear-mongering will not succeed, and reform will begin, though not nearly as strongly as I would like, or we need.
It was a useful and healthy exercise for the Democrats to go through the agony of fashioning a 60 vote majority last week.
It is not fun to watch sausage being made in legislation, and the exercise of coming to a reasonable consensus that led to 60 votes was very important I think.
The next votes, after seeming interminable debate, will require only a majority in both houses. There will be endless debate and posturing, but sooner or later a conference bill will be agreed on and there will be an up or down vote by the total Congress. Odds are that there will be a Health Care Reform bill, and however inadequate it will be made to appear at passage, it will be an essential and long overdue first step in saving our nations health care system and making it more accessible and less exclusionary than it has been in the past.
I have no idea what the final bill will look like.
The Republicans have cast their lot on working for failure, not reform, on this and other issues, I hope that a bright light shines on their negative efforts to obstruct necessary improvements in many areas of public policy. The residue of the last many years was truly a train wreck needing to be repaired. It is time to let the repairing begin.
And by the way, for those who might forget, the Republicans did pass an incredibly expensive Health Care bill in 1996. It was a windfall for big business and it is the looming disaster for us all; ask seniors about the infamous ‘donut hole’ in Medicare part D. Hardly anyone who follows the issues carefully would disagree that the cumulative impact of neglecting reform, and subservience to business (and profit) interests has left our entire Health Care system battered and broken.
Those who happen to have “good” coverage now, without Reform, beware. For those who don’t want reform at all because they have that “good coverage” and don’t care what happens to anyone else, think for a moment about the people around you: relatives, friends, yourself – what if you fall through the hole in the safety net? Because, of course, you can….
A PS:
Who’s running things in Washington?
Last February I made a little chart to help educate myself. Here it is:
The print is small, but if it’s Red, that means Republican control; Blue, Democrat control. Occasionally there were ties. 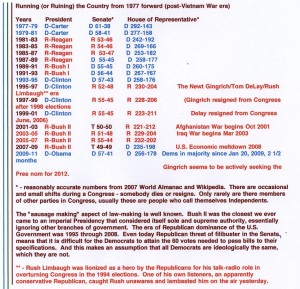