Monday and Tuesday I took a trip out to ND to give my Uncle a little help at the farm near Berlin; the place where Mom grew up ‘way back when’. The hardest part of the work is the drive back and forth, though there was some heavy lifting that needs two people. This time the objective was to begin emptying a couple of grain bins.
Once the augur is in place, and hooked up to the power take off of the tractor, the project basically takes care of itself…until the end when some unlucky person has to shovel the last remnants. I was spared that task this trip. Some day I won’t be….
The augur augured, Uncle Vince supervised from the cab of the tractor, and I had some time to wander around the now people-less farmstead. One of the apple trees in the front yard showed evidence of some windfalls, and it was an invitation to a quick lunch. I knew from past experience that these are GOOD eating and pie apples, though the remnants I found this year were on the small side.
The apple trees are now large, and there were still a lot of apples up there in the ‘heavens’ of the top branches. Vince and Edith knew they were there, but too high to harvest by the usual means.
Then came Tuesday.
Tuesday was a windy day – not an unusual occurrence in ND: 15-30 mph they were saying.
There were sufficient windfalls so I decided to make myself useful and pick them up off the ground.
The wind blew, and one dropped to the ground here, another there, sometimes several at once. I’d clean up a piece of ground, and a half dozen apples would be there in no time.
I found the task changing from ordinary work to fun. For a time, there, I felt like a kid, hoping that one of those free-fall apples would ‘bop me on the noggin’, but none did. By the time I finished, I had nearly a bushel of those windfalls gathered in one place, and then in a tub.
While I didn’t grow up on the farm, I visited there a lot when a kid and adult. So it was possible to connect the dots between the very hard manual work of the old farm days, and the occasional simple fun that visited those scattered patches of humanity in the simpler times of America years ago.
Like raining apples. 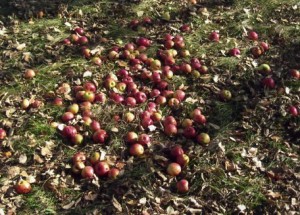