September 27: DID YOU WATCH LAST NIGHT, AND DO YOU HAVE COMMENTS ABOUT THE DEBATE? Let me know. We went to a house party in the area. There were 25 of us, “birds of a feather” I’d guess, all of us serious demeanor and very attentive. I felt Secretary Clinton did a very good job: Mr. Trump was as always; and the audience at Hofstra was relatively well behaved. Lester Holt did the best he could. I still am not sure of the substantive value of political debates as they are now staged. dick_bernardATmsnDOTcom. 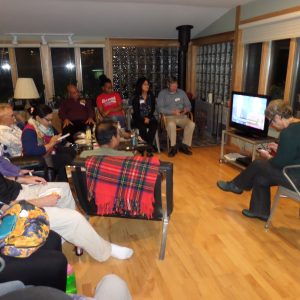 September 26 Post:
Most likely we will be joining a group to watch the debate tonight. About the only preliminary reading I have done specifically about the debate is here. It speaks for itself.
The “debate” tonight will speak for itself as well.
It seems an appropriate time to recall an interesting round of debates in the year 1927 in the midwest and western United States. The debaters were young graduates of Cambridge University in England. The details follow, if you are interested. The circumstances are a serendipity kind of story.
(click to enlarge) 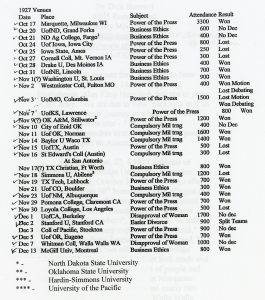 The itinerary of the Cambridge Union Society debate team, 1927 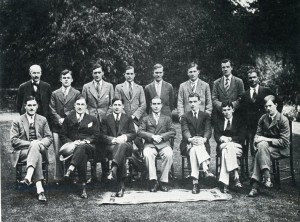 Cambridge Union Society with committee and two guest speakers 8 June, 1927. Debaters in America, Fall 1927: Alan King-Hamilton and H. L. Elvin, front 4&5th from left; H. M Foot, back, 4th from left. From King-Hamilton’s book, “And Nothing But the Truth”.

How this 1927 story came to be:
My father and I and four others traveled to Quebec in 1982, and on one day an English lady joined us for our days excursions. We were all staying at Laval University.
Over the years, Mary and I kept in touch by annual greeting cards. I knew little about her except that she was a dealer in old books.
In November 2001 my wife and I went on a trip to London, and I let Mary know we were coming. She volunteered to show us around. At this point, I didn’t know that her father, then still living, was Alan King-Hamilton, a retired judge of the Old Bailey Criminal Court in London.
I don’t recall the sequence, but we met Judge King-Hamilton in person, a most charming gentleman, well into his 90s; and she also showed us Middle Temple, of which her father was a long-time member.
We went into the library, and I was casually browsing, and noted the spine of a book, “And Nothing but the Truth“ by Judge Alan King-Hamilton QC, her father.
I picked the book up, flipped the pages, and the first stop was page 13 where in mid-page was a comment “Our debating tour took us right down the Middle West, from North Dakota….”
North Dakota! That was where I was from. That was where my Dad had planned to go to University in 1927, but had to revise his plans when his Dad’s employer, the flour mill, closed, and the bank that held all their savings also closed within a week of each other.
It all went from there. I received from Mary a book personally autographed by the Judge, and he also privileged me with the 45 page transcript of the diary of he and two colleagues 1927 tour of the midwest and west as part of the Fulbright (then called IIE) exchange program.
Out of the transcript I wrote the summary which you can read above.
There were elements of tonights debate back in 1927, but what was most striking to me is the formality of the competition.
The debaters needed to be completely versed in the affirmative and negative of six potential questions, and weren’t certain of what question they would be debating, whether affirmative or negative, until right before the debate began. Presumably, their competitors were under the same rules, though I’m sure there were temptations to fudge.
Enjoy, and thanks to Alan King-Hamilton and his daughter, Mary, who still lives in suburban London.
https://thoughtstowardsabetterworld.org/wp-content/uploads/2022/04/thoughts-300x138-1.jpg 0 0 dickbernard https://thoughtstowardsabetterworld.org/wp-content/uploads/2022/04/thoughts-300x138-1.jpg dickbernard2016-09-26 14:03:272016-09-26 14:03:27#1166 – Dick Bernard: The Presidential Debate, and a Look Back at some 1927 Debates in the United States… "And Nothing But The Truth"
0 replies