Thursday morning, as I was leaving Valley City ND, I stopped in at the City Park to take the below photo. It was in this park, at this band shell, that I heard Gov. Nelson Rockefeller speak in June, 1960, as he was seeking the Republican nomination for President.
(click to enlarge) 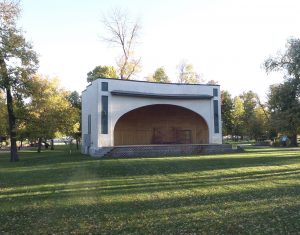