Today is primary election day in Wisconsin. As per custom, I write before the first vote has been officially counted; at about the time the polls open.
Some weeks ago I was on a busy street here in Woodbury, waiting to make a left turn enroute home.
Crossing at the light was a guy carrying a large hand-written cardboard sign reading, as I recall,
“Vote for
God
in the
U.S. Presidential Election“
Interesting thought.
Certainly, the man knew what God’s platform was, otherwise, why would he be holding up his sign? When in doubt, perfection is the gold-standard, which God must certainly represent….
The problem, of course, in this society of individuals, which the U.S. is, there are many differing definitions of God, including positions on the issues of the day. There are numerous “Christian” denominations; and Jews and Moslems recognize presumably the exact same God as well. We are all of the same family of belief. But we fight wars in God’s name.
But mostly God is as we define the deity; God is our own individual construct.
Thus the man and his cardboard sign. (He had no illustration of what he thought God looked like…that, too, would have been interesting.)
I happen to spend a lot of time in my Church, which is recognized by most as a Christian denomination.
To my knowledge, God hasn’t laid out his platform at my Church, though I admit we were out of town on Easter, when the new Archbishop was celebrant/homilist. At any rate, my guess is that the new guy would be the last one to declare himself as God among us. He simply has a bit more public persona than the rest of us in the pews; the new chief spokesperson for the organization which is the Catholic Church in Minnesota.
So it goes as we enter the heavy-duty political season.
My preferred candidate for President is Hillary Clinton, (which draws literal or figurative gasps from Bernie and Donald and Ted (and John and Paul) fans alike). My position really hasn’t changed since I supported her in the 2008 Primary Season.
For the most difficult job in the world, she is by far the most eminently qualified, in my opinion.
Opinions differ. So be it.
Of course, we are all bombarded with claims, charges, counter-claims, and the heavy duty campaign season has not yet even begun.
But for starters I offer two items, one from an e-mail from a friend back in December; another from the Minneapolis Star Tribune in March, both from the respected Politifact.com, a group which tries to keep ahead of the assortment of pitches we political consumers are bombarded with.
I’ll let the illustrations speak for themselves.
(The first ranks the then-candidates in descending order, most False claims first; the second does the same, by True claims first. Note Hillary Clinton in both illustrations.
Certainly, you can say, “yah, but….” But remember we’re not in a carnival, we’re selecting our leaders at all levels for the exceedingly difficult job of finding some persons who must stand in for god, and make some pretty tough decisions.
(click to enlarge the illustrations) 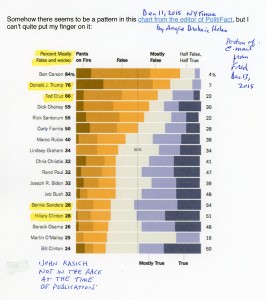 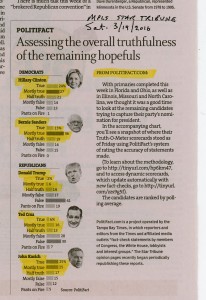