Monday I was completing a project, and noted to my colleague that I was about to go to a funeral. “I am sorry that you will be at a funeral; my condolences”, came the reply, to which I replied “I’m at the age where these are increasingly common events…life goes on….”
It was not a flip statement, simply a statement of fact. As you get older, you become more aware of death, pending and actual.
Judy had died on April 5, the details unimportant. She was a many years long friend of my wife, and she and Bud had been married for 53 years, best I could tell, a great marriage. They had met when she was a car-hop at the Dariette in east side St. Paul, and he was a young biker (who later in life earned many patents at part of a work team for a large corporation).
I sent Bud the condolence card I always send when someone dies. I took it in November 1999 along I-94 east of Valley City ND. It’s story always, to me, has been the radiance of the life just ended, and the family tree left behind. Nothing fancy.
(click to enlarge) 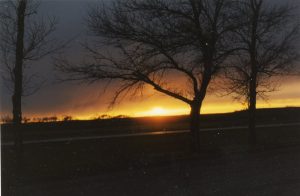 Every end-of-life commemmoration differs.
Judy’s was marked by simplicity. This mother of four, grandmother of eight, and great-grandmother of one was recognized this way in the program: “Judy loved music. She could play the accordion, the organ, and all sorts of percussion instruments. She sang in her high school choir and church choirs her entire life. Judy was a drum majorette in high school and also played in the St. Paul Police Band for five years where she played community concerts and marched in parades. She loved to dance and could never resist a Polka!
Judy was full of energy, loved being outside, going on walks, planting vegetables and flowers, weeding the garden, raking, picking up sticks, and even re-stacking the wood pile. If there was something that needed to be done, she would jump up and do it.”
They didn’t mention her homemade pies. Well, there is only so much space in a program. The Priest who presided at the funeral and who had visited her during her final illness, choked up, visibly emotional, during the service. This is something I rarely see. She had that kind of impact on a person.
Bud had been especially thankful for the card and note (photo above) in which I commented on the personal meaning that the sunset and the tree had for me.
Perhaps there was a reason Bud was particularly moved.
At the end of the program were the lyrics of “Beyond the Sunset (A favorite song of Judy’s)”. You can listen to a version of it here.
(Click to enlarge) 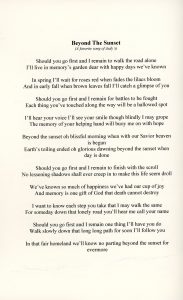