My friend Lynn Elling died early today, Valentine’s Day, 2016.
Lynn was four days short of age 95. His daughter, Sandy, said “I think he may have planned to head up to Heaven on Valentines Day to be with his life long sweetheart, my mom, so it is quite fitting.”
Lots of words will be said and written about this businessman who spent most of his adult life as a warrior for peace. I understand there will be an obituary within the next week; and a Memorial Service is planned for May 1, 3 p.m. at First Universalist Church, 3400 Dupont Ave S, Minneapolis MN.
There will be lots of time for “Lynn-stories”.
Lynn was no wallflower.
It was my privilege to know him for almost nine years, but I have to admit periods of Lynn-fatigue. Lynn was relentless. Nonetheless, Lynn walked the talk for peace for almost all of his adult life. He had some incredible accomplishments, including the flying of the United Nations flag over Hennepin County Plaza from 1968-2012; and Man’s Next Giant Leap, a film he produced in 1971, which featured John Denver singing “Last Night I Had the Strangest Dream”.
Everyone who ever spent a half hour in Lynn’s presence knew his experience with war began as a young Naval officer whose LST (Landing Ship, Tank) came to Tarawa Beachhead in the period immediately following that horrific battle with loss of thousands of lives near the end of 1943. 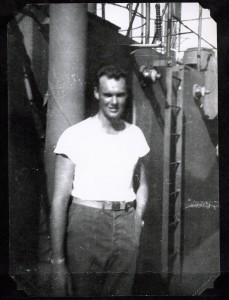 I heard the Tarawa story from Lynn numerous times.
Dec. 21, 2015, completely by surprise, I came upon a monument in the town of Waimea (Kamuela) Hawaii on the Big Island, which brought the story of Tarawa more to life. Here is a photograph of the monument at Waimea, which tells part of the story.
(click to enlarge) 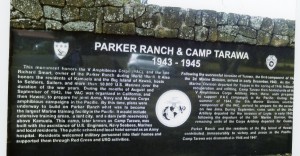 Not long before he died, January 18, 2016, I stopped in to visit Lynn at the Nursing Home. He was about to be discharged to return to his home in south Minneapolis, and he looked and sounded better than he had in months. We talked about Tarawa; I gave him the photos of the memorial at Waimea, and I took the below photo of him. 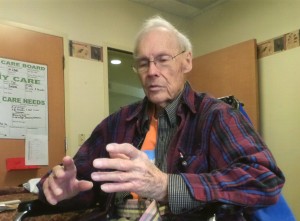 Sadly, Lynn’s return home lasted all of three days, thence began the end of his life’s procession.
Now he’s gone, but his work and his example of working with others for peace and justice live on.
Bon voyage, Lynn. 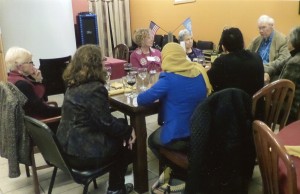 Lynn (at right) at what turned out to be his final Friday night gathering at Gandhi Mahal restaurant. The next day he went into the hospital, and except for three days in January, 2016, never returned home.