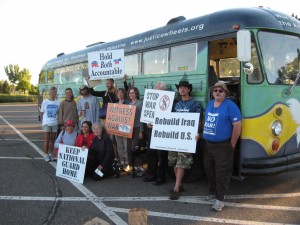 Most everything has been said, many times, about the deadly ending of WWII at Hiroshima and Nagasaki.
The second atom bomb exploded over Nagasaki, Japan, 70 years ago yesterday (August 9, 1945). It was scarcely news in the public sphere yesterday.
It occurred to me that while I knew plenty about the deadly events in Japan, I’d never really checked where the cities actually were, to give some context. So, here’s where Hiroshima and Nagasaki are in relationship to each other, and to Tokyo. (While looking at the map, note the proximity of the Korean Peninsula and Japan.)
There is another piece of context usually missed.
Recently I was watching a re-broadcast of the last segment of Ken Burns, War, about the end of World War II. The U.S. possessed two A-bombs, it was said, and if Japanese surrender hadn’t come after Nagasaki, the war would have continued.
What if a third bomb had been available then, and a decision had to be made to use it? Or four, or ten, or 50 were available and “needed”? Would we have bombed Japan essentially out of existence? Would that have brought lasting peace?
Japan is not a tiny country; even then it was very heavily populated (about 80 million, one-fourth the current population of the United States). Today it has 127 million people, about 40% of U.S. population.
Alternatively, what would have happened if no A-bombs had been available to drop on Japan at the awful, bitter, end?
There are many opinions, all speculative, to answer these questions – what we think might have happened.
We now possess a huge arsenal of deadly weapons that are too frightening for someone sane to actually use in war, yet we continue to insist on keeping this huge stockpile, and condemning others who even consider the possibility of having even one of their own.
One wonders what we are thinking? Or, whether we are thinking at all.
Yesterday there were events commemorating Nagasaki, and speeches about what it means to us as a civilization. But mostly, August 9 was off the radar.
But not all was quiet.
Yesterday, a group of which I am a founding member, the U.S. Peace Memorial Foundation, awarded its 2015 Peace Prize in Los Alamos NM, where the atomic bomb experiment became a deadly reality in 1945.
This years award winner, I learned overnight, was Kathy Kelly, who we hosted overnight August 29, 2008, when she and seven others were completing the last day of a walk from Chicago to St. Paul to witness for peace (Photo begins this post, above). Several folks from the Twin Cities area joined the group for their last several miles, ending at the College of St. Catherine.
Kathy’s group was very impressive and committed, I recall. Kathy obviously continues her quest for an enduring Peace in the world.
While people today generally yearn for Peace, the public atmosphere seems far more one of hopelessness than hope, in effect: “What can I do? Nothing.”
That 1964 movie, “Dr. Strangelove, or How I Learned to Stop Worrying and Love the Bomb”, comes to mind.
Still, there is a massive and ready market for peace in our country and around the world.
But the salesforce for peace – people like Kathy and the Peace Memorial Foundation – have to drastically change their marketing strategy, in my opinion. This will take much introspection, and retooling of tactics. Otherwise a noble message will continue to be marginalized, and those who “Love the Bomb” will remain dominant.
But all is not hopeless:
For the first time in many years, there are active and efforts at the highest levels of government to change the conversation about relationships between the United States, and Cuba, and Iran; indeed all countries. Building such relationships had seemed hopeless, but they are proceeding, and that is very good news.
My friend, Ehtasham Anwar in Pakistan, has his own driving dream of a peaceful world, and he has the drive to achieve his dream. He and I and others visited here in June; his goal for us is a United States Alliance of Peacemakers.
94-year old Lynn Elling, Naval officer in WWII, witnessed for peace at the Concordia Language Villages at Bemidji MN last Friday, rededicating the World Citizen Peace Site his organization established years ago. Sometimes his quest seems quixotic, impossible, but he’ll never quit.
Peace activities continue between St. Paul MN and its now 60 year friendship with sister city Nagasaki, Japan.
In early October, 2015, another friend, 88 year old Dr. Joseph Schwartzberg, witnesses for peace with a very important Creating a Workable World Conference in Minneapolis.
These folks and many, many others simply need to coalesce together, in concert, towards a common goal: a peaceful and sustainable world.
As the song some years ago so clearly said, “We Are The World” (The long version).
POSTNOTE: a powerful eight minute video received from a friend, today.
https://thoughtstowardsabetterworld.org/wp-content/uploads/2022/04/thoughts-300x138-1.jpg 0 0 dickbernard https://thoughtstowardsabetterworld.org/wp-content/uploads/2022/04/thoughts-300x138-1.jpg dickbernard2015-08-10 06:22:462015-08-10 06:22:46#1050 – Dick Bernard: Nagasaki, August 9, 1945. A Message to the Peace Movement.
0 replies