PRE-NOTE: The U.S. Peace Memorial Foundation will award its 2015 Peace Prize in Los Alamos NM on Sunday August 9. The event will be live-streamed. You can access information here.
Numerous observances have been and are being held on this deadly anniversary of the first use in war of a nuclear bomb: Twin Cities of St. Paul/Minneapolis; St. Paul; other events in many places. Consider joining something, somewhere.
Some quotations from Albert Einstein, Robert Oppenheimer and Charlie Chaplin on the Atomic Bomb.
Related post: here.
(click to enlarge all photos) 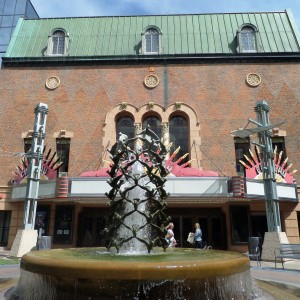 Today is the 70th anniversary of the first use of the Atomic Bomb over Hiroshima, Japan, the first of only two uses of the deadly bomb as a weapon of War (Nagasaki was August 9, 1945).
The United States is the only country to have ever actually used the bomb in warfare.
The United States and Russia have over 90% of the total arsenal of nuclear weapons worldwide. The U.S. alone has over 7,000 nuclear weapons, hardly a good example of disarmament. Only 9 of over 190 world countries have nuclear weapons.
My personal reflections about August 6, 1945 was written ten years ago. That column was published in the August 6, 2005 Minneapolis Tribune: Atomic Bomb 1945001
Of course, there were differences of opinion about The Bomb in 1945, in 2005, and now. I won’t solve those arguments here.
My intention is simply to open space for dialogue and reflection.
The most recent American Legion magazine (I’m a military veteran and long-time Legion member) has a long article defending the assertion that being armed to the teeth with thousands of nuclear warheads is good, essential even, for U.S. national security. I think such a notion is insane, but here’s the article from my copy of the magazine: Amer Legion A-Bomb001
Both articles represent a reality, then and now, of how a world divided inevitably fails: the downside of powerful people cultivating enmity and division among peoples to achieve and maintain dominion, power and control anywhere. In war, ultimately, everyone loses. Each war is progressively more dangerous. In many ways we now live on a planet without borders. We are at the point where we risk destroying everyone and everything.
But division for the purpose of asserting dominion is, unfortunately, a tactic that is still useful, though never long term. Study any in a long line of those who lusted after long-term victory, power and control, including in our own country.
*
Emphasis on peace is a hard, but much better, road to travel. Peace is a process of inches, never simple. But we see evidence of it every day, everywhere.
I saw it on display Tuesday at the “Peace Plaza” in Rochester MN, just down the street from the famed Mayo Clinic, through whose doors enter people in medical crisis, from many cultures.
Tuesday is best conveyed in pictures (click to enlarge them):
1. The older man, likely Arab, sitting quietly next bench over, feeding the birds with bread crumbs kept in his pocket. 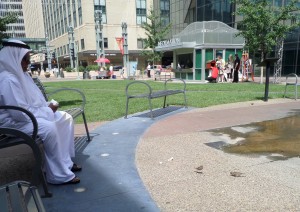 2. The man and woman, likely father and daughter, who spoke quietly, conversing in Spanish. 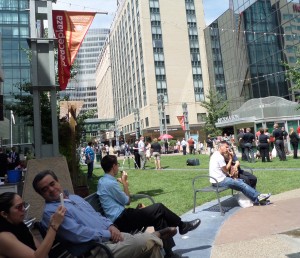 At one point the younger woman, obviously a very gifted dancer or gymnast, posed for her Dad in front of the Peace Fountain, and he took her photo with his iPhone.
3. And finally, the crowd that began to swell nearby, for some unknown reason. But it was obvious that they were proud to be together: 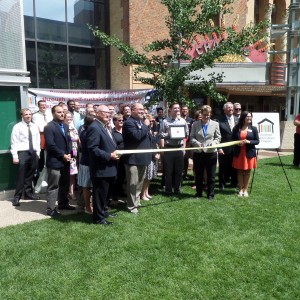 Turned out, they were together to celebrate successful completion of a summer project to set up mini-libraries in Rochester, for the purpose of quietly improving literacy. There was a ribbon cutting, and the Mayor read from a childrens book.
After they left, I looked at the fruit of their labor – the mini-library which will remain on Peace Plaza, cousin to (apparently) many others around Rochester, and in other places.
War was not welcome in Rochester, on Tuesday…a typical scene everwhere. 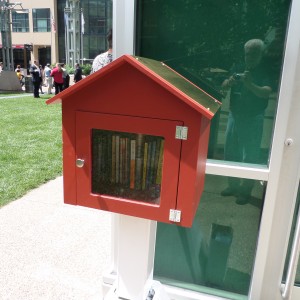 So, which reality will dominate us forward from today? Peace, or permanent and unending war or threat of war? Neither can be successfully imposed unilaterally. Both require negotiation of differences towards and compromise, such as the recent and difficult negotiations with Iran.
Watch the emphasis of the questions and responses of the first presidential debate tonight. This is the face of America that the rest of the world will see.
*
Our planet cannot survive war.
Any two people in relationship must negotiate differences, constantly. Why should it be any different among nations?
Neither choice is easy. There are downsides, as my relatives conveyed in their letters (above commentary) back in the summer of 1945. Though it is never perfect (it is, after all, negotiation) reaching an imperfect agreement is far better than the alternative.
Peace takes work, lots of work; and it takes an ability to understand, appreciate and negotiate differences, including amongst “birds of a feather” who seem to have the same basic beliefs, but are hampered by the same competitive power struggles that hobble societies at large.
Peace will continue to happen neighbor-to-neighbor; town-to-town; but it also must happen all the way up the line through the leaders we select by our action or inaction at the local, state and national level.
My opinion: a huge stockpile of nuclear weapons in our arsenal is not a deterrent; it is an expression of national insanity.
There is a better way. Let’s work towards it.
*
POST NOTE: This week was also National Night Out in the United States. This is a week to highlight neighborliness in our communities.
Doubtless the event I witnessed at Rochester’s Peace Plaza on Tuesday was related in some way to National Night Out; and was the culmination of an activity that began in March.
People prefer peace. We ordinary citizens are the one who must lead the conversation about peace everywhere, including in our world.
Let’s rid ourselves of the illusion, as the Aircraft Carrier below, that massive weapons of war reflect any solution to anything. 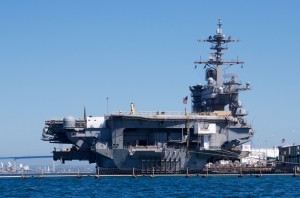 A United States Aircraft Carrier, Summer 2015, too often the kind of symbol that represents our image to the rest of the world.

COMMENTS:
from Joyce D Aug 6: from Juan Cole, Informed Comment (Includes President Obama’s speech, August 5, 2015.)
from Norm H: Thanks, Dick.
Some good food for thought and the basis for some serious thinking and reflection.
I am one who does think that dropping the A-Bomb twice on Japan was absolutely necessary and really the only way to eliminate the need for an invasion of Japan that would have resulted in thousands and thousands of US casualties. In spite of their significant losses of land, men and material as the Allied forces marched up the Pacific towards Tokyo, the Japanese military was till not convinced that waving the white flag was a better alternative than preparing to defending the homeland from the pending Allied invasion.
And, dropping the two bombs did bring Japan to the table and the end of the war even though there were still members of the military who wanted to fight on till the death literally and figuratively.
The problem with all of the above is, of course, that it opened the proverbial Pandora’s Box of the potential for nuclear warfare….and lead to many years of détente and the Cold War…with the operating theory being that at least in terms of Russia and the United States, if each nation could theoretically destroy the other given their respective nuclear arsenals, that “peace” would exist.
As an Air Force intelligence officer during that time, I was particularly aware of the reality of that situation.
Of course, once the Box had been opened, other countries began to develop nuclear weapon capacities which began to challenge…perhaps only in a minor way…the integrity, if you will. of détente.
The Cold War ended and historical researchers will no doubt spend time trying to sort out whether Russia was actually ever as strong as the US claimed as justification or its arsenal and defensive capability build-up in terms of nuclear weapon capacity let alone the ability to deliver those weapons during that period of time.
So, while I have no doubt what-so-ever given the situation in 1945 that the dropping of the two bombs was necessary, the result was the opening of Pandora’s Box which could never again be closed on the matter.
On the other hand, many countries were developing the nuclear weapon technology so it was just a matter of time before some country either used it or used the threat of its use as leverage for some strategic position or policy.
https://thoughtstowardsabetterworld.org/wp-content/uploads/2022/04/thoughts-300x138-1.jpg 0 0 dickbernard https://thoughtstowardsabetterworld.org/wp-content/uploads/2022/04/thoughts-300x138-1.jpg dickbernard2015-08-06 01:24:052015-08-06 01:24:05#1049 – Dick Bernard: August 6, 2015: The Atomic Bomb at 70. Reflecting on Peace.
0 replies