The item which follows from Anne Dunn*, was forwarded to me by my sister, Flo, June 8, 2015. We had been trying to decide on an appropriate Native American recipient of a financial gift in honor of our Aunt Edithe. Edithe had been especially attentive to Native American fundraising appeals.
Anne’s commentary was originally on her Facebook page, and is forwarded with her permission. It helped Flo and I decide that Billy Mills organization “Running Strong“, was a good recipient for a family gift in memory of Aunt Edithe. 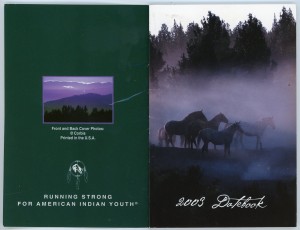 Possibly Aunt Edithe’s introduction to Running Strong, a Date Book. This one had no website. The 2004 edition includes a website.