At some points in our lives we all experience an “as good as it gets” moment or two.
For me, one of those times happened five minutes from our house, on June 25, when the local Community Theatre staged a magnificent version of Les Miserables.
Here’s the program for the evening: Les Miserables002, and below is a photo from the cover of that program.
(click to enlarge) 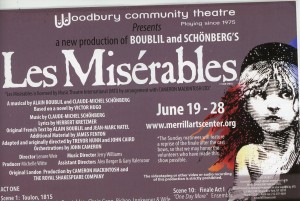 I’ve seen “Les Mis” before, including the film, and a powerful professional staging at the Ordway Theatre in St. Paul.
It looms large. A large cast. A long, long time in your seats with two Acts, 19 Scenes.
For a professional company it’s a daunting production.
For Community Theatre? I can only imagine.
I can thank my friend Michelle Witte for the nudge. It was just a last minute e-mail announcement she sent the day of the performance we attended.
I am embarrassed to say that I had not been to a production before this year, though I’ve lived in Woodbury for 15 years now, and the Theatre has existed for 40 years (beginning as an idea for a fundraiser for Royal Oaks school in our general neighborhood.)
Because I have a “history” with Les Mis, I took Michelle’s bait, and to be honest I thought they were desperate for customers. It was the end of the run, after all.
We got a clue, soon enough.
The parking lot at the high school was well-filled, and people were streaming in.
Something was up!
Inside, a near full house, and then the performance began, one act after another.
We’ve all seen “The Music Man” one time or another. This was River City writ large. One performer after another nailed their parts. I’m sure someone could find a misstep here or there, but those 76 trombones kept on playing, flawlessly, one piece after another.
During the intermission, Michelle spied me and came over. Over 5,000 people had come to this run, she said.
The word had obviously gotten around.
I knew she was long time active in this theatre. In the program, I looked at the bios of the company (page three). Down at the end of the alphabet, there she was: “Michelle Witte (Producer) adores the COMMUNITY in Community Theater….”. Producer? Oh, so obvious. I’ve known Michelle for a dozen or so years now, and enthusiasm and tenacity would be good descriptors of her.
Before going to the show I was visiting with our neighbor across the driveway, Lynn, and mentioned we were going to the performance. “My granddaughter is in the play. She is Cosette.” Of course, Cosette is a centerpiece of the show, the little girl on the program cover.
Wow.
In the same program you’ll find young Cosette listed right after Michelle Witte. I’ve seen her visiting Grandma more than once in our neighborhood. Lynn says Victoria has no stage fright and wants to go to acting school in New York.
Never doubt the power of belief.
To Woodbury Community Theatre, here’s to 40 more years or more.
Thanks, Michelle.
We’ll be back.