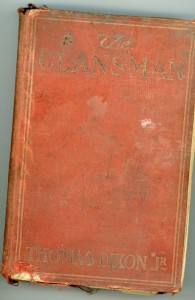 Last night I saw on television much of the remarks of South Carolina State Senator Paul Thurmond, son of Strom Thurmond, making a strong argument for removal of the Confederate Flag from the South Carolina Capitol grounds. He seemed somewhat nervous, but sincere and impassioned.
A distillation of his remarks was in three paragraphs in the midst of a news report on Page A5 of todays Minneapolis Star Tribune. I hope the entire speech gets more publicity. If anyone was putting himself out there, personally, it is Strom Thurmond’s son, arguing against what was his father’s mantra for his entire career.
It is a good sign.
This is an issue – race – that will not go away, and it lives within all of us in this country in one form or another. It is part of our national tradition, our personal DNA.
We are steeped in the notion of superiority of the White Race and the inferiority of those whose complexion suggests Black.
A good briefing on the history of this issue was sent to me by my friend, Joyce, yesterday. You can read it here: In her note, she says “this was published almost a year ago, but it is well worth rereading”. I agree.
Indeed, it is helpful to look back.
Two years ago someone with whom I had common ties many years ago in small town North Dakota, stuck me on a list which turned out to be your basic rant-site against anything related to President Obama.
At an early point, I asked a pointed question about one particularly racist rant. Who would pass along such a thing. The writer, from Washington State, took the bait Nov. 7, 2013:
“Mr. Bernard, you want to know who [I am]. I don’t know about your back ground. But I can give you a little bit about mine. My real name is ________. My back ground is that I served this country for over 53 years. 23 as a Soldier, and 30 as a Civilian. I spent most of that time in Foreign Countries. I’m a Vietnam Vet. I am a Republican, although I have voted for a Democrat in the pass, (President Kennedy). By the was [sic] my Brother In law is a disabled (retired) Federal Park Police. So I know a little about the Park Police through him. As for this President. In my opinion The only reason he was elected, was the fact that he is half black. You never hear him talk about being half white. [emphasis added] One more opinion, I think that all US Citizens should fire both the Democrat and Republican Congressional leader and start over, including the President and his cabinet. Our Government Leaders should live under the same laws and regulation that the American Citizens live under. I think you would see a big difference in our laws that we would have to live with.
That’s just a little about me.”
Which leads back to “our personal DNA”.
I have been going through the endless task of sorting stuff at the North Dakota farm, and one day came across the book, whose cover photograph leads this post. “The Clansman” was published in 1905, the same year my grandparents came to that farm. But this book (see end photo) included many photos from the film Birth of the Nation, based on the book, from 1915, and also indicated that the book had once belonged to the Moorhead MN Public Library.
When did they get this book? Who got it? Why? Why was it kept for over 100 years? Why did it fascinate me sufficiently so that I now have it?
We didn’t talk about Black people out there. In my growing up, there were hardly any around to talk about.
There were, however, Indians. Different story.
All this and more part of the necessary conversation. 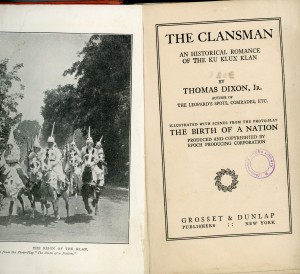 COMMENTS:
from Jeff: I am not sure what to make about the sudden GOP conversion. I suspect after 2 or three days of saying it was “up to South Carolina”, or
It was an attack on Christians… both of which were universally derided … someone who was doing polling figured out that stonewalling
Wasn’t going to help this time.
Although I think the smoke of removing flags… covers the issue of gun violence and right wing terrorism.
from Carol: Great job. I’d like to see that book!
from Peter: The “stars and bars” was a battle flag, not a national flag, and was only resurrected in reaction to the Civil Rights Movement. It symbolizes anti-integration, racist sentiment, and nothing more, recent interpretations notwithstanding.
from Alberder: Thanks for this honest and candid post.
from Bruce: At some level, Dick, America is dealing with race. That’s good, but there is double standard going on, not the one you might initially think.
Remember Anwar Al-Waki. The Muslim American that without due process according to his & our civil rights was designated as a terrorist, sentenced to death & was murdered by the president.
Now, from what I’ve been reading these white supremacy groups are an international conspiracy to control, if not eliminate, people of color. For me, these are far more dangerous to the Homeland than the groups designated as terrorist organizations, which are called Islamic extremists.
If the these white suprematist organizations are labeled “terrorist”, will the president hunt down and kill their leaders without due process. I hope not. But the precedent has been set.