A few days ago a short-notice invitation came to attend a Monday afternoon talk by Canada’s Governor General, David Johnston. His brief bio is here: Gov Gen’l David Johnston001. I RSVP’ed, and at 5 p.m. yesterday about 150 of us spent a most pleasant hour with the Gov. General in a small auditorium within the massive Northrop facility at the University of Minnesota.
(click to enlarge photos) 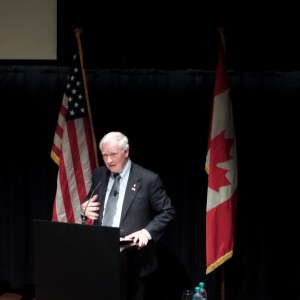 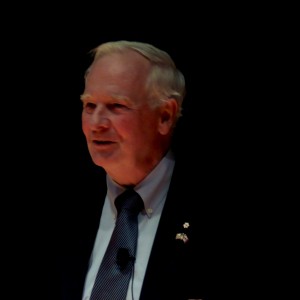 It was an hour very well spent.
Earlier in the day, a commentary by Mr. Johnston appeared in the Minneapolis Star Tribune. The commentary catches the same content as we heard in person from this prominent Canadian leader. Here’s a brochure available at the gathering: Canada-Minnesota002
What I like about these talks – what makes the extra miles and inconvenience of parking etc worthwhile – is that they provide an in-person view; something of an opportunity to “get the measure” of the person behind an official column representing a countries point of view.
My sense: the Canadians, and I have lots of Canadian cousins, are very well represented in the international arena by their Governor-General.
In my hearing, someone asked someone-who-seemed-to-know “to what American political office does Canada’s Governor-General compare?” The quick answer, to this likely oft-asked question is “The Governor-General is much like America’s President”.
Of course, there are sharp differences: the Gov-General is appointed by the Queen of England, for instance. But apparently he is the Commander-in-Chief of the Canadian Armed Forces, and appoints the Cabinet.
Canada’s Parliament and House of Lords and Prime Minister are the political end of Canadian Government. It makes sense, historically. Early America rebelled against a King and opted for direct election of a President by the people. In today’s British Empire, the luck is that there is a reigning monarch who is beloved. I suppose the regime could change sometime in the future.
The Governor-General caught my attention early. He grew up in Sault Ste.-Marie and from six years old on was good friends with Lou Nanne of the old Minnesota North Stars. They remain good friends to this day.
He talks about running in the annual Terry Fox Run which I’ve been familiar with since almost its beginning: Dad and I and some friends went to our ancestral home country in Quebec in early summer 1982, the second full year of the run.
Johnston is a diplomat from common roots and public education, and his reverence for public education caught my attention as well. “Cherish our teachers”, he said. Those who labor in pre-Kindergarten to Grade One should be the highest paid professionals, he said.
He talked of a most interesting conversation with one of his international colleague leaders on the concept of inclusive vs extractive economic and political actions. I think (my apologies if I miss the mark) this link may come close to what he talked about yesterday.
Perhaps the main takeaway, most always when I hear/see somebody of Mr. Johnston’s stature, is that word “diplomat”, of which Mr. Johnston is a walking example. I haven’t thought much about that word, but a working definition might include the descriptor “smoothing rough edges”.
People in Mr. Johnston’s position are very well aware that one size does not fit all, and that many points of view must constantly be negotiated if the planet is to survive. They are practiced at working with, not against, opposing points of view to get a resolution to seemingly unsolvable problems.
My sincere thanks to the Canadian Consulate General, Minneapolis, to the Minnesota International Center (MIC), and the Humphrey Institute at the University of Minnesota for this opportunity.
At the end of the program, MIC was presented a medal by Mr. Johnston for their long history of working towards international understanding. Here’s a photo: 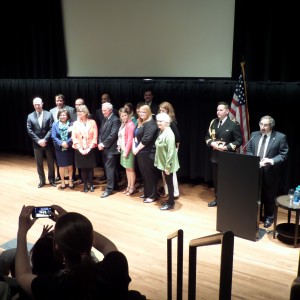 Of course, a couple of RCMP Mounties accompanied the Gov. General. And who wouldn’t want a photo with a Mountie! I told them (they were from Flin Flon and The Pas, Manitoba) that their former colleague and my friend Jean-Marc Charron did virtually my entire French-Canadian genealogy in Montreal before he died in 1996. They are in great company. 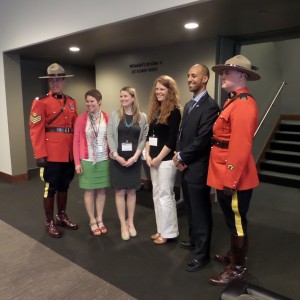