This evening our friend Annelee Woodstrom speaks about growing up in Adolf Hitler’s Germany. I’ve heard her speak several times, and she is always thought provoking. She was 7 years old when Hitler came to power, and 18 when his dream of a 1,000 year “Third Reich” ended, after only 11 years, with the German people ruined as well.
Of course, megalomaniacs don’t seem to learn by the past mistakes of previous megalomaniacs, whether individuals or consortiums of individuals. They always think they have the system figured out: that they won’t make the same mistakes their predecessors made. So, the folks who birthed Project for a New American Century in the late 1990s, probably really believed their own fantasy, and the first project was presented on a silver platter by the 9-11-2001 terrorist attacks: the opportunity to take Saddam Hussein and Iraq in 2003.
We soon learned the reality of that fantasy, but, of course, after a few years of recovery, history can be re-manufactured, and rehabilitated, and so it goes. Some will always contend that Iraq was a success; as there remain here and there some neo-Nazis with similar fantasies.
So it goes.
Dream on. We should be wary of being duped by the might is right crowd. It never quite works out the way they fantasize.
I was five years old when WWII ended, finally, in September, 1945, with the surrender of Japan. I’m old enough to have memories, and there really are no specific memories of those first months of peace. Most likely the dominant emotion of my parents and those of their generation was relief that it was all over. I wrote about what adults felt in a commentary for the Minneapolis Star Tribune in August, 2005: Atomic Bomb 1945001.
In 1945, in tiny Eldridge ND, there was nothing for a five year old to notice. Young kids are limited by their very limited experience.
I know, now, that life was difficult for the adults at the time. Things like Ration Cards, Victory Gardens, relatives, neighbors and friends as casualties in War, made the dominant emotion, likely, similar to my grandmother’s “Hurrah, the old war is over!” in a letter to her Naval Officer son in the south Pacific, even though her exclamation came to celebrate, in a sense, the Atomic Bombs of August, 1945.
Her son, my Uncle Art, graduated from high school in May of 1945, and almost immediately went into the Army, though he never had to serve overseas. He trained at Ft. Carson, Colorado, and was in the Ski Troops, preparing for conflict in more Arctic regions; most likely they knew their training was basically “peacetime” service. Her son, Lt. George Busch, came home at the end of October.
My Dad was now Superintendent in Sykeston ND, and George’s teaching position at the high school there was held by George’s wife, Jean, until his return.
The War was over.
(click on all photos to enlarge them) 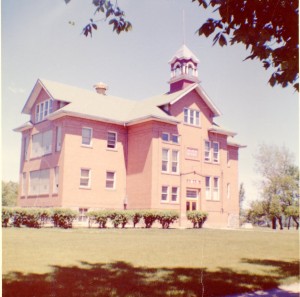 Then came Memorial Day, 1946.
Somehow frozen in my memory, indelible, was the lawn of the school pictured above. I remember that day, standing about where I stood to take that 1958 photo. I would have been six years old.
On the school grounds there were numerous crosses representing the servicemen lost in WWII from that community and surrounding area. There seemed many.
Between myself and the crosses, facing away from me, were several riflemen, giving the traditional farewell salute.
I don’t recall Taps – that would have required someone who played the trumpet. Years later, in that same space, my brother Frank played a perfect version of Taps, there, or so I understand.
War was over.
For little over a year there was no war, it is recorded. The United Nations was founded in October, 1945. People everywhere were sick of killing each other.
The peace didn’t last. It’s been more-or-less perpetual war ever since; more simmering than boiling, but the next explosion could be the final one for humankind if we don’t figure things out.
If there ever was a time for “power to the people” for Peace, it should be now.
Let us work, hard, together, for Peace.
POSTNOTE:
Fifty-five of us spent a powerful time with Annelee Woodstrom on Friday night. Here’s a couple of photos. 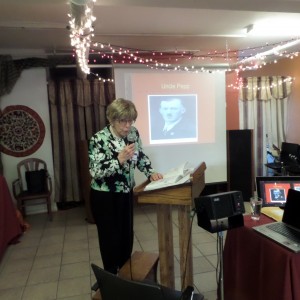 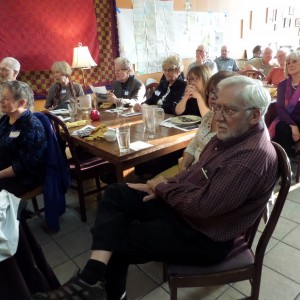 #1020 – Dick Bernard: An Hour with Governor General of Canada, His Excellency... #1022 – Kathleen Valdez: A Surprise Find from a DNA Analysis.
Scroll to top